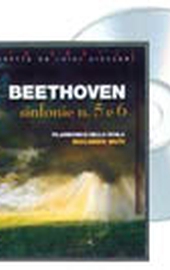 Beethoven's Fifth Symphony is the piece of music which, in the early days of our educational experience, helped us to think.
Chronologically, it was this work by Beethoven that I would listen to with the first students (the first ten or fifteen) who would gather together with me. I did this to stimulate the ideal, risky dimension of life, without which one never does anything, is like everybody else, gets bored like everyone else - not for nothing is the Fifth called "the Destiny Symphony." We would listen especially to the symphony's first movement, the one with "destiny knocking at the door." The beginning is the bursting in of an event. The whole drama of the orchestra develops from the event of those four initial notes that are continually repeated. In those notes is expressed that destiny that, in life, passes through the perception of bewilderment, of defeat, of sadness, and at times presents itself in its harshest aspect of trial or temptation.
Temptation is a storm, like the one described so wonderfully in the fourth movement of the Sixth Symphony, for me Beethoven's most successful. This movement introduces, foreshadows, and describes the storm that breaks out and then passes. It passes, and everything is resolved in the sweetness of the things that are done.