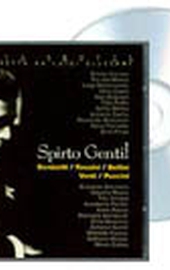 I still remember the instant and the thrill, the yearning of the instant when the fact of God’s existence became a primary fact charged with meaning in my life.
I was in seminary, in the first year of classical high school. During our singing lessons, for the first quarter of an hour, the professor would usually illustrate the history of music by having us listen to records. That day, a 78 rpm record started going round on the turntable, and the song of a tenor who at the time was very famous suddenly broke the silence of the classroom. With a powerful voice full of vibrato, Tito Schipa began an aria from the fourth act of Donizetti’s La Favorita: “Spirto gentil, ne’ sogni miei, brillasti un dì, ma ti perdei. Fuggi dal cor mentita speme, larve d’amor fuggite insieme.” When this marvelous tenor sang “Spirto gentil, ne’ sogni miei…”, when the very first note vibrated on the air, I intuited, heartrendingly, that what is called “God” – by which I mean the inevitable Destiny for which a person is born – is the ultimate end of the need for happiness, it is the happiness that the heart irrepressibly needs.
As soon as I heard “Spirto gentil,” in that precise instant of my life, for the first time I understood that God existed, and thus that nothing could exist without a meaning; that the heart could not exist unless there was the heart’s goal: happiness.
Man’s heart – the human ‘I’ – is the need for happiness; the first word that Christianity says is this. If we do not start with this, we cannot understand any of the rest. In that first year of high school, in that timbre of voice, I had perceived the thrill of something that was missing, not from the beautiful song of Donizetti’s romance, but from my life: there was something missing and it would not find support, fulfillment, an answer, satisfaction anywhere. And yet the heart demands an answer, it lives only for this.