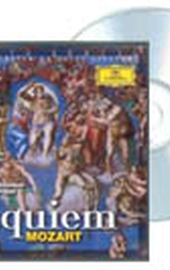 Wolfgang Amadeus Mozart was born on 27 January 1756 in Salzburg, the seventh child of Leopold and Anna Maria. Only his sister Anna Maria, called familiarly Nannerl, four years older than he, was still alive; highly talented musically, she was very early taught by her father to play the harpsichord. In the beginning Wolfgang followed in her footsteps, but he soon revealed exceptional gifts which were immediately recognized, supported and developed by his father. He took over the young boy's education and searched for ways to promote the child. Beginning when he was six years old, Wolfgang's life was marked by countless long trips throughout Europe: in Germany, to Paris, London, Vienna, three times to Italy. (...) I
n all his music, even the easiest, the most "pleasant to the ear," that unfolds so naturally as to seem obvious, there is always a depth and a breadth that, to those able to perceive it, open a window onto the mystery lying behind all things, and leads to an experience of satisfaction and peace, even if only intuited.