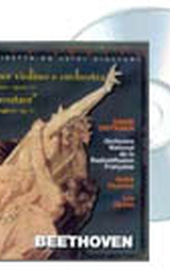 The Concerto for violin and orchestra in D major, which Beethoven wrote in just a few weeks between the summer and fall of 1806, was at the beginning not a great success. (...)
Beethoven's Opus 61 can be seen as a distance traveled in three movements, each one summing up a milestone in an ideal progressive "conversion," which takes place within this crucial relationship of "soloist-group." If in the first movement (Allegro, ma non troppo) the violin puts itself in a contradictory position with regard to the orchestra, as though to affirm with violence its own individuality, until it wears itself out, until its definitive acceptance of an ideal embrace, the second movement (Larghetto) describes the pacifying serenity of this harmonious connection, a recognition that permits the thrilling joy of celebration described in the final movement (Rondò, Allegro).

In the Kreuzer sonata the violin and piano conduct a dramatically intense dialogue, reaching an almost orchestral strength of sound.
After a slow, solemn introduction, they throw themselves into a dizzying chase, that seems never to end. The long awaited rest comes in the second movement. The theme, whose sunny sweetness will recur in the scene of the brook in the Pastoral Symphony, is variously reworked by the two instruments, who take turns singing and accompanying. The third movment takes up again the impetuous pace of the beginning, but with the joyous tones that characterized the central adagio.

(from Concerto for violin and orchestra op. 61 by Enrico Parola - excerpt from the booklet enclosed in the CD)