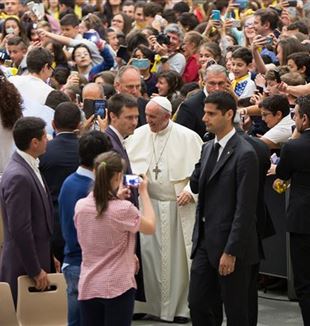 Piazza del Sant’Uffizio in Rome, 6:45 a.m. on June 2nd. Giovanni’s voice breaks the silence: “Everyone gather around. Take up your instruments. We will enter in a few minutes, so we can begin rehearsal.” Then 30 or so musicians, between the ages of 11 and 14, huddled around the director of the “Mario Moruzzi Juniorband.” They had traveled from Cremona on an overnight bus. The rehearsal is not for just any concert. In the Paul VI Audience Hall, they will accompany the singing of 5,000 other Knights of the Grail (a group for the Christian formation of middle-schoolers). The Knights had come from across Italy and from abroad to attend an audience with Pope Francis. These kids are not the only ones who had traveled all night: those from Palermo had the longest journey, a 14-hour trip to the capital. Many others also arrived very early in the day.

At 8:00 a.m. it was time to go inside. From a barricade under the portico of Bernini, Vera, in the fluorescent green sweatshirt of the six people of the secretariat, waved her hands in the air to tell her peers to show their white rubber bracelets that said “Cavalieri 2017” (Knights 2017): these bracelets were their entrance passes that allowed them past the police. It would be the only slow moment of the day. Then they rushed toward the hall.

Onstage, the musicians tuned their instruments. Fr. Marcello Brambilla, the leader of the Knights, approached them and said: “Today, you can be a sign if you believe that Christ is with you. This goes for you and for me. There is the temptation to think that you are better than the others because you look down at them from the stage, but actually you are serving your friends. Be united as you play, and follow. Any mistake you make will be in front of Christ. And He will smile, rest assured. So do not worry.” At this, a boy let out a sigh of relief. 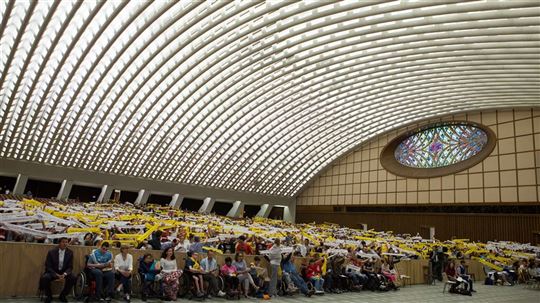 As the rows filled up, the large screen next to the orchestra displayed images from the life of the Knights: praying, playing, studying, and hiking. At 9:30, Fr. Marcello spoke into the microphone on stage: “Let us say the Angelus. It is the first moment that Christ was present in history, just as He is now.” Five thousand middle-schoolers, who up until then had been laughing, talking, and jostling, immediately fell silent. It was not necessary to instruct them to quiet down. “Now grow in awareness of Christ’s presence while reciting Morning Prayer. Take up your books. We will teach you the recto tono, so that we will all sing the same note together. In this way, we will harmonize our voices and our hearts.” The explanation may not have been clear, but what is more likely is that most had never prayed Morning Prayer before, especially not in recto tono. The first attempt was a failure. The choir director chanted alone. They started over. “Keep in mind one verse from the psalm. It will accompany you throughout your day. It is Christ’s gift to each one of you.” The prayers permeated the hall.


“I am no longer alone.”
After that, there was not a sound–all were preparing for the meeting with the Pope. Preparing their hearts. The singing was punctuated by a few comments made to introduce each song so that everyone could have a fuller experience. They sang “Al Mattino” and “You.” During the melancholic “Il Giovane Ricco” (“The Young Rich Man”), all were standing and following the gestures of seven of their friends leading the song on stage. After the singing, the first video about the life of the Knights in Catania, Udine, Termini Imerese, Asunción, Milan and elsewhere began to play on the big screen. The youth talked about what they do together, how they came to know about this fascinating companionship. When Mustafa appeared on the screen and stated, “I am no longer alone,” the crowd of 5,000 began to cheer. At the end of the video, they sang the hymn which Giovanni had composed the previous year for the general audience the Knights had attended in St. Peter’s Square. Then there was more video. Fr. Marcello explained: “Imagine your face on that screen. Because the same thing happened to you. You had an encounter and life became beautiful.” Frank and Uwa, two Nigerians, climbed up on the stage to read their story. They recounted how they had lost their parents, how they had feared for their lives as they crossed the sea, and how they had arrived in Sicily and had been introduced to the Knights by a teacher. “These friends are our family. God has saved us. I am not afraid anymore.” Life had become beautiful for them as well. The youth listened attentively and then applauded enthusiastically.

As the youth finished singing “Quando uno ha il cuore buono” (“When One is Good-Hearted”), suddenly everyone crowded toward the central aisle. Rumors had spread that the Pope was about to arrive. False alarm. Fr. Marcello said: “You see, it is the same way with Christ. All it takes is a sign to mobilize everyone. But the moment has not yet arrived. Please go back to your seats so that we can finish watching the video.”

There was time for a few more songs. The Knights groups were announced by their region in Italy, so that each could stand and participate in singing “When the Saints Go Marchin’ In.” Then the youth from other countries were called on: France, Spain, Portugal, and Switzerland. By that time, it was 11:30. The exhaustion and tension made them distracted. Fr. Marcello exclaimed, “This will not do. Let us sing ‘Ojos de Cielo.’ Always look for someone with that gaze, full of Him.”

At 11:50, loud cheering erupted. This was no false alarm–Pope Francis had arrived. The hymn began to sound again and everyone was calling out his name, waving their scarves. Those in the far back stood on their chairs. Along the aisle, everyone stretched out his hands, to touch him even briefly. It evoked the scene from the Gospel of the crowd of people wanting to merely touch the cloak of Christ.

The voices quieted down when Fr. Marcello was greeting the Pope: “Holy Father, we are happy to be here and to be able to meet you, to see you, and to listen to you. You are in the presence of middle-schoolers, accompanied by adults along a path that serves simply to reveal that life is beautiful because Christ loves us. We are here because Your Holiness continually demonstrates the joy of someone who follows Christ. We want to follow you and we are anxious to hear your response to the questions that three of the youth will pose to you.”

The first to approach the microphone was Marta, an eighth-grader. She will be making the jump to high school next year. “Why must everything change? Why is it so scary to grow up?”
“Life is a continuous ‘hello’ and ‘goodbye,’” said the Pope to start.
“What you say here is a challenge, it is the challenge of life.” The Pope thus commenced the dialogue with Marta on fear: “We must learn to look at life, looking at horizons, always more, always more, always ahead. And this is the choice you must make.” Fear gives way to the challenge.
Giulia asked, “I would like to ask you what we young people can do in a concrete way to change the world around us.”

With open hands.
Francis called on all of the youth to grapple with these questions. He began from the reality of their lives, relating an example of an unkind friend. He opened and closed his hand to show how one can stay in front of reality: open or closed off. The youth followed his example, raising their arms and opening their hands. “The world is changed by opening the heart, listening to others, accepting others, sharing things.” “Changing the world with little everyday things.” “And what did Jesus teach us about this? Pray for everyone.” The Pope made a proposal: “In a group, for about half an hour, speak about this. If they do this to me, what must I do?” The last question was also the most dramatic one, resonating with everyone’s heart. Tanio, from Bulgaria, after spending five years in an orphanage, was adopted by an Italian family. A year later, his mother passed away, followed by his grandparents. “The Knights are a gift, a great gift, for me because they are close to me and support me in every moment of my life. However, this question comes to me: how can you believe that the Lord loves you when He makes you lose people or makes things happen that you would never want?” Not even the Pope knew how to explain suffering. “I look only to the Crucified Jesus. If God let His only Son suffer so for us, there must be something that has a meaning.” God’s love can always be found beneath suffering. “Only those who support you, who accompany you and help you grow, will make you feel God’s love.” We can entrust all of our suffering to the Virgin Mary. “She understands pain, like all mothers.”

As they stood up, the youth recited the Knights’ prayer of consecration. After the blessing, the Pope once again addressed the middle-schoolers. He asked how generous a heart must be to face life. He wanted them respond with a gesture, the one they had performed earlier. Five thousand open hands were raised high. But that was not all: Francis asked if everything in life can be explained. The resounding “no” was not loud enough. He repeated the question. This time, the walls of the Paul VI Audience Hall shook.

Before leaving the stage, he approached the kids in the band. He received one of the matching shirts they were wearing as a gift. “I want to hear you play again.” They ran to their instruments to play to “I Cieli” (“The Heavens”). As he was leaving, he gave a thumbs up. He did not forget anyone–he hugged each of the Knights with special needs in the first row. Meanwhile, the arms stretched out from behind to touch him. Then came the turn of those who asked the questions. For each one, he offered a phrase to affirm what they had said. To Marta, “Remember to grow”; to Giulia, “It is possible to change the world”; to Tanio, “do not get angry with Christ,” and he blessed him on the forehead.

On the train back.
Then there was a farewell to Fr. Marcello, Fr. Julián Carrón (the President of the Fraternity of CL), Gloria, Lucio, and Franca, who along with Fr. Giorgio Pontiggia were the first to give life to this endeavor. And a last farewell also to the youth. To the two Nigerians who gave their witness and to 54 Knights who represented the 5,000 present. A hug, a kiss, a gaze, even a selfie, to capture the moment. Many people held out an envelope or a slip of paper with their intentions, their questions, their lives. The doors to the Paul VI Audience Hall shut at 1:00 p.m. The youth ate lunch beneath the Bernini colonnade.

In the afternoon, some of them headed home, while others remained one more day to make the Knights’ Promise. While on the train back to Milan, Mattia, a seventh-grader, said to his friends: “There were three people on the stage today: Fr. Marcello, the Pope, and Jesus.” Christianity, simply put, is a companionship among friends.