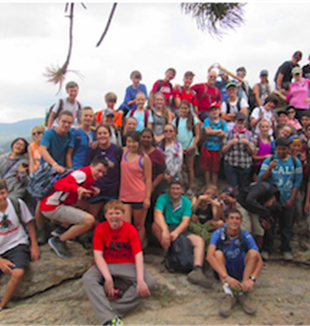 “The things that I see.” It is one of the refrains heard most often in Lyons, at the vacation of the Knights of the Holy Grail of Denver, held July 25-29, 2016. Ten were from the South Bay of California, near San Francisco. The theme of these five days was the verse from Eugenio Montale: “Under the dense blue sky the seagulls go; they never stop, because every image says: further.” Further and further...

“You were invited and you said ‘yes’,” Father Accursio Ciaccio said to the Knights (“Father Accu” is what they call him). He is a priest of the Fraternity of St. Charles Borromeo, stationed in Broomfield (25 miles from Denver) and leader of the Knights. “I promise you that if you continue to say ‘yes’ in these days, you will see things that are much more beautiful than the mountains and the sky. You will find something much greater.”

For the Californians, it was not easy to get there: two hours on the plane and a big expense. “Some of the kids who couldn’t come on vacation grabbed a sponge and soap and washed cars to help their friends earn enough money to come,” recounts Andrea Battistoni, researcher at Stanford and one of the leaders of the group from San Francisco. Even some online fundraising helped to bring down the cost. Some of the donations came from Italy, and many of them were anonymous, from characters like “Batman,” “King Arthur,” “Barack Obama,” “Simon and Garfunkel” … or one for $1000 from “XXXYYY”. That’s America!

With every activity, the thousand miles between their respective cities was soon erased at Peaceful Valley Ranch in Lyons. Every day they did the roll call and if the person after you was not there, you had to say his name and where he was. At table, the Californians sat separate from the others, but soon others would sneak into their group. “These people really wanted to know us, to know who we are, why we are here,” said Alan. “Our classmates don’t even get to that level of familiarity so quickly,” added Nancy; far from being “politically correct.”

Little by little, through hikes, prayer, and songs, an unknown way of being together began to take shape: joking, even cheating! “One night, there was a game in the forest,” Andrea recounted, “but we made so much noise that the police came. In order to continue the game, the kids decided to play in silence. Have you ever seen twelve-year-olds running around silently?!”

“What did you see today?” This was the question Father Accu invited each of them to keep in mind. “On our hike, when we reached the top of a mountain, you saw all of Colorado,” recalled John: “Then suddenly, we all got silent and were able to notice a deer close by, and the beauty of the mountain despite the tiring journey. Something knocked on our hearts while we were about to fall asleep.” Later, he would add at the final Assembly, “I want to live this silence my whole life.”

One evening, Giacomo, an astrophysicist and friend of Andrea, gave a talk on the stars and then they went out to look at them. “If you had to be closed up in a room, what would you take with you?” asks Father Accu the next morning. The kids responded, each with their own idea, finally realizing that nothing would be enough. Luke, a seventh grader said, “Not even the universe, or the stars we saw last night.”

The days went quickly; the vacation is over; there is a bit of nostalgia for “the extraordinary things that we have seen this week,” says Father Accu: “His name is Jesus. He is always with you. If you see Him, tell others about Him. If you don’t see Him, beg Him to see Him.” This is the rule of the Knights.

But the question remains, even when we go home: What did you see today? “Beauty, the same that I saw when I went to Rome to see Pope Francis with the Italian Knights,” Alice sad. “It seems that Jesus wanted to show me something so beautiful, and now He is saying to me: ‘If it is possible there, it is possible also here, in California, where you live now!’”

Mark: “Like the fox says to the Little Prince: now, ‘the wheat, which is golden like your hair, will make me think of you. And I will love the sound of the wind in the wheat…” Because, when you are tamed, everything reminds you of that which tamed you; becomes a familiar step, of which you don’t have to be afraid. Now everything speaks to us of those friends we met in Colorado.”