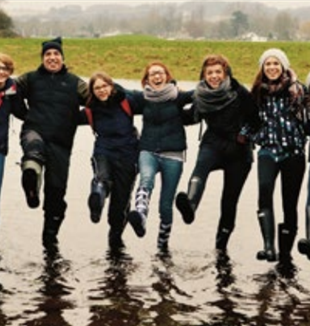 “Student Youth is a friendship, not a place.” This is the clear evaluation of sixteen-year-old Martha, a Londoner from Maidenhead, a suburb of the British capital. She began following GS in Great Britain a few years ago, invited by Fr. Pepe, a Spanish priest at their local parish (see Traces n. 10/2015), during her preparation for Confirmation. Today at the GS gathering she talks about her summer, the vacations, her friends, and the GS Equipe in Italy, where she went for the first time this year. With her in Cervinia was Anna, from the City. “We expected we would feel very alone at the Equipe, but actually we felt very welcomed.” They sensed an unexpected familiarity with everyone. “Those kids I didn’t know shared my same question.”

Singing Coldplay
“Giorgia has the same questions as well,” Martha thought about her classmate, who is not even baptized. “Last year I tried to invite some friends to the GS initiatives. I wanted them to come with me, but almost egotistically. Instead, I understood that what I’ve encountered is for them, too, for their happiness.” This was a new hypothesis for her for facing everything, from her classmates to her passions, like theatre. “GS outside of ‘GS’” is how she now defines the discovery that she can challenge everything, starting from what has seized her.

This new gaze prompted her to invite Giorgia at the beginning of September, for a day together organized by the London GS youth, featuring games, dances, and a meeting together. There was even a look at modern songs, from Coldplay to Brandi Carlile, trying to compare their experiences and ideas with those in the lyrics. “Here it’s not normal for a Catholic to invite an ‘outsider’ to a Catholic gesture,” Fr. Pepe explained. And instead Giorgia was there. And she will be there for other gatherings of the English community, about thirty young people in all, some children of families in the Movement, including transplanted Italians and other “non-natives” in London for student exchanges.

The same wound. And what is the context of the Maidenhead group? “There’s prejudice against the Church, certainly. Here the rule of cool reigns supreme, the fashion of the moment. You have to go to parties, you maybe have to drink, and if you don’t fit in.... Instead, the kids themselves say that in GS they find relationships where they don’t have to fake anything and can be themselves. They feel embraced. But this isn’t some bomb shelter to take refuge in, they always say. Even if some kids still live it this way, others are beginning to ask themselves how the experience they have in GS can challenge every aspect of life.”

Irene, for example, changed schools, and at the beginning of the year found her new classmates and “the superficial things they talked about” to be unbearable. She felt “desperation at the idea of passing most of the next two years with them.” So what did the experience of Student Youth have to do with any of this? At the GS gathering she wrote these notes: “I can be a victim or I can make memory of the unconditional love that has embraced me.” Fr. Pepe asked, indicating the theme for the next gathering, “Only starting from this embrace can you see that the others are not different from you? Isn’t it maybe that they have the same wound, too?” “They constantly surprise me,” says the parish priest. “I see things happening in them that I ‘already know.’ I see Christ change their lives, and the lives of those they meet, like that mother. She noticed that her daughter was different, happier, and she came to see, and she, too, began coming to School of Community.”