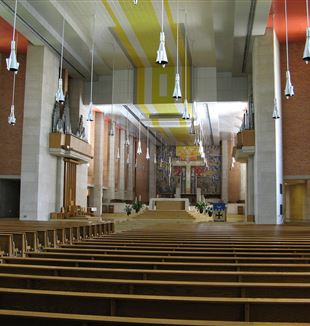 In America’s current economic and social climate–one in great turmoil, giving rise to questions about the stability of the future for upcoming generations–the factor of education weighs in heavily. With a new school year well under way, we look to the halls of higher education, to the students who will inherit the “new world order” and the teachers trying to guide their paths. Traces interviews Dr. Kim Shankman, Dean of Benedictine College who also serves on the Kansas State Civil Rights Advisory Commission as well as at the Center for the Advancement of Catholic Higher Education. She asserts that in order to educate and be educated, an awareness of the full scope of reality is necessary. Instead, “at the school level, we try to divide ‘facts’ from ‘values;’ at the university level, faculty are pushed toward hyper-specialization and students do not view their education as a means of learning about life.” She helps us to understand and judge the current challenge of education, “which is that it is, by its nature, a wound.”

Since 2010, in your work with the Center for the Advancement of Catholic Higher Education, you have been analyzing core curricula at Catholic universities. What is your vision for growing Catholic culture in the university setting?
Catholic culture has to be organic, coming from the lived experience of the community and expressed in every aspect of college life. While all educators have a responsibility to transmit the intellectual heritage that we are stewards of–ensuring that our curricula are both broad and deep, anchored in enduring truth and responsive to contemporary needs–I believe that the best curriculum in the world is not sufficient for carrying the burden of education. (And, conversely, even a poor curriculum can support a good education.) Much more important than curriculum is the commitment of educators to form students, both in their hearts and in their minds, to be open to reality and to love the truth. I was really inspired by Pope Benedict’s Address to the Catholic College Presidents when he came to America, in which he described Catholic education as an act of “intellectual charity.” A true Catholic culture in a university grows from that understanding of education–that it is based on love and seeking the truth. Christ has to be the center of our lives together, because Christ is the way, the truth, and the life. If we are seeking reality, we are seeking awareness of the presence of Christ.

But the popular culture seems to moving in another direction...
We see education entirely instrumentally, almost exclusively tied to a means to earn money. The most important challenge, though, is that culturally we have lost the sense of the wholeness and integral relationship of reality. Students do not view their education as a means of learning about life. Studies show that college students have moved from seeing college as the first step on the road to adulthood to seeing it as the last gasp of childhood; they prize the ability to engage in irresponsible behavior more than the chance to embrace the responsibilities of autonomy. Thus, educators face a challenge in simply getting students to take themselves seriously. This exacerbates the central problem of education, which is that it is, by its nature, a wound. To open up space for students to be educated, teachers have to make them see that their ways of making sense of the world are wrong, or at least incomplete. They have to give up assumptions and certainties that have guided their lives and helped them deal with the world around them. Giving these things up is a risk, and it hurts. Our culture, which diminishes, if not dismisses, the idea of reality, isolates students from the one possible source of meaning that would make the difficulty of learning comprehensible. If nothing is certain, why waste your time?

Do you think one of the problems in education is that reason is not bound to affection, and there is a kind of malaise or lack of wonder, as Fr. Carrón recently discussed at the CL Beginning Day?
I think that a major problem facing education today is that reason is not seen as a path to discovering meaning. Reason is so reduced–essentially to calculation–that it is hard to help students see how their education assists them in discovering the meaning in life. For example, I assign a research paper in my law class, and I tell the students that the paper cannot be about a “subject” or “topic”–it has to be an attempt to answer a question that they actually want to know the answer to. Many, many students struggle with that idea. The thought that they will be doing academic research to find out something that they really want to know is simply foreign to them. This indicates to me that for many students, reason itself is alienated. Thus, they find their meaning in their personal affiliations or preferred identity (I am an artist, I am a Democrat or Republican, etc.), but see no role for reason in the shaping of their self, their identity, their life. So this malaise is a real problem. It’s as if I was going on a hike in the woods and you gave me a hammer and said to use that to keep from getting lost. There is no connection between a hammer and finding my way; it’s just a burden and annoyance. Many students today, I think, see their education as a hammer. It’s a tool, but not one that is relevant to their goal, of discovering where they should be going.

How has this dynamic come about?
It is because, all their life, we’ve told them, implicitly and explicitly, that the things they really care about (love, beauty, goodness, even truth itself) are not really things that are subject to reason–they are in the area of personal preferences, individual values, arbitrarily chosen lifestyles. In other words, it’s as if the culture as a whole has taken a compass and very effectively disguised it as a hammer, painting over the dial so that it is completely obscured, and then given that to the students to guide them on their walk. It’s no real wonder they seem to be wandering lost and don’t make a lot of use of the tools we give them.

You said teachers have the job of trying to open students to a more complete world view. How have you been able to facilitate such an approach?
Whenever I talk to faculty about teaching, I try to remind them that what matters is making a three-way connection between the subject they are teaching, the nature of reality, and the individual student. In some subjects–say, theology–this is easy; not so with Calculus! Even in these subjects, though, a teacher needs to consider and pass on what powerful new understanding will come with this tool, and what this tool has to do with the students’ own lives, how it adds depth and meaning. And I would like to ban every teacher from “teaching to the test”! There is no way a student can take education seriously with such an approach.

And what about the students?
Once the teacher has realized these values for himself, he becomes creative in finding ways to propose this quest for truth to the students, holding them responsible, challenging them to participate in such a way that they really learn. They need to be required to be agents rather than receptacles. We need to learn to, and be willing to, require our students to be free.

This is a new proposal?
We are fighting against decades of an education model in which faculty and students are rule-bound, slaves to the idea that college is just a means to an end (making money), and is held together by compliance to protocol. Submitting your work by deadlines and passing your tests means you have succeeded. This is the plague on higher education: we are systematic to the point that the heart of the matter–learning–is removed! Everyone in higher education–faculty and students alike–should defy this model, and instead seek the truth in their subject and its meaning for themselves. This is learning.

Your perseverance is such an impressive witness...
Education requires a commitment to reality, to the truth about things. It’s really, really hard. It’s so hard it can’t be done without the presence of Another, who makes it possible for us to risk together this radical commitment to seek the truth without counting the cost.