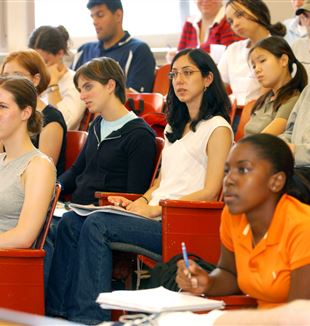 Traces interviews Dr. Brad Gregory, Associate Professor of History at the University of Notre Dame, a historian of late medieval and early modern Christianity and of intellectual history in early modern Europe; he is also a father and education advocate and critic. Gregory offers insight into the challenges of the American educational system.

How has the emphasis on scientism come to bear on education today?
Scientism–which is not to be confused or conflated with science–is an ideology that maintains that only those ideas, assertions, and claims that satisfy the criteria for knowledge as stipulated by the natural sciences are rightly considered to be knowledge. Everything else–including all moral claims and assertions about what might transcend the empirical, observable natural order–is relegated to the domain of “opinion” or “belief,” and thereby rendered a matter of subjective, personal preference. So we cannot know that human beings have inherent dignity, for example, or that the poor should be helped rather than ignored. In this way, scientism is connected to moral relativism. Because in higher education the social sciences and the humanities take their epistemological cues from the natural sciences, they overwhelmingly share the natural sciences’ postulate of metaphysical naturalism, and the same assumptions permeate public school education in secondary and primary schools in the United States. A major effect in education is to make it impossible to consider the claims of religious traditions in relationship to the findings of academic disciplines, even though billions of people in the world make sense of their lives in and through religion. In the United States, the constitutional separation of church and state is now paralleled by an exclusion of the consideration of religious claims in classrooms from kindergarten through universities. Indeed, in primary and secondary public schools, history is frequently taught in absurdly distorting ways with respect to religion, even leaving it out almost entirely.

It has been widely recognized that the public school system is not improving, if not actually failing. Since the 2002 implementation of the No Child Left Behind Act, statistics have shown some negative trends. Why is the situation worsening, and what might arrest a further downturn?
The overwhelming, deep difficulty concerning our public school system, especially in our big cities, is that it’s not an isolated or isolable problem. It’s a tangled, complex nexus of problems inseparable from lousy urban neighborhoods, drug addiction and trafficking, broken homes, poverty, gang violence, a lack of role models, and so forth. Another problem, of a quite different nature and which afflicts affluent as well as impoverished public schools, is that too much emphasis is placed on bolstering students’ self-esteem and trying to make them feel good regardless of their academic performance. Much more should be demanded of students, and much more emphasis placed on the acquisition of basic knowledge as the foundation for more serious intellectual development as students move through school.

Pope Benedict has addressed the “educational emergency” by calling into question modern society’s emphasis on moral relativism, which tempts parents and teachers to abdicate their educational duties. What do you think about this?
In this respect as in so many others, Pope Benedict shows himself to be an acute observer of contemporary Western society. Many people, including parents and teachers, infer from the fact of moral pluralism the conclusion of moral relativism–as if, because different people indeed make all sorts of conflicting claims and hold contradictory beliefs and sanction opposed actions, there are no good ways of discerning which among them are better or truer than others. Everyone is his or her own authority; everyone enjoys supreme autonomy for his or her own life. When parents or teachers accept and implement these assumptions, they in effect undermine one of the fundamental, millennia-long objectives of education, which is not simply about imparting information or skills in “critical thinking,” but a habituation into virtuous behavior and the moral formation of the whole person as an integrated human being. But because of the crisis over values and truth in our society, this very objective is frequently met with a cynical skepticism. Benedict understands this lucidly.

The Pope has also stated, “The world needs people who discover the good… When it comes from the perception of the good, then it wants to communicate itself... In this sense we have a new need for that primordial trust which ultimately only faith can give.” Do you agree with some who believe that teachers such as these can only be found in the private sector?
There are also public school teachers who do courageous and heroic work in imparting what is true and good to their students, through the example they set and in their care to educate the whole child. The difficulty in public school settings is that they are not permitted to explain why they act as they do, or why students should behave in certain ways rather than others, aside from references to extremely thin, secular notions of morality. Were they to discuss openly that they love God and try to love their students in imitation of Christ, or because of the Jewish duty to live a righteous life, they would be censored and told to “keep their personal beliefs to themselves.” Students accordingly cannot be instructed about the ways in which being a certain kind of person and living a certain kind of life is part of a comprehensive, coherent worldview–and how that worldview is related to what they’re learning in biology, history, or English class.

Do you believe that education is a question that concerns us all, not just professional educators, academics, and specialists? How is the educational challenge primarily one for all adults?
Without a doubt. First, because education concerns the ways in which our children and young adults learn in formal settings, and the sorts of people whom they become, all of us should care about education and the way in which it is approached. What information is being imparted? And what information, messages, and values are being overlooked or rejected? Second, because adults are the ones who create and maintain schools, hire faculty, approve curricula, and set educational goals, they should all understand their responsibility for the education of children and young adults. And finally, and most fundamentally, the idea that education is something that ends with formal schooling is in my view a terrible misconception. Adults are ideally the ones in a position to learn best, and to learn most, and to learn in more sophisticated ways than can children and college students. Unfortunately, there is a pervasive tendency in the United States to reduce education to vocational training, mere preparation for a useful, well-paying career. All adults can and should continue learning throughout their lives, as the discharging of a responsibility to develop their God-given capacities and the fullness of their humanity.

As was emphasized at the CL Responsibles Assembly in La Thuile, the principal help we can offer to each other, including students, is “setting our ‘I’ in motion”–which can be described as a “risk.” What do you think about this risk? How can we approach the educational relationship starting from one’s freedom?
Genuine education always involves risk, because it always implies openness to discovering the inadequacy of one’s knowledge and perspective based on things that one hadn’t known or hadn’t previously considered. And to learn something new that touches on areas central to one’s worldview and values is almost always unsettling, because it shakes up what one thought was set. My own experience has been that the Catholic faith has never let me down in my educational endeavor: although I have been shaken up and unsettled many times along the way, the resolution on the other side always involved more knowledge, a better understanding of the way in which the faith’s claims and the findings of evolutionary biology, say, or the facts pertaining to a certain historical episode, are related to one another. I think one of the most common mistakes Catholics make is not to keep inquiring, reading, reflecting, and discussing after they’ve taken an educational risk and encountered something that has unsettled their faith. A given philosopher argues X or Y against the faith; so what? Is he or she right? A particular discovery by neuroscientists shows that certain parts of the brain are responsible for ideas pertaining to morality and religion; so what? Far too many people lose their faith because of ignorance; when it’s challenged, they don’t keep asking questions and seeking a better understanding of it. One thing we can be certain of: if the faith is what it claims to be, namely true, then we need fear no inquiry or genuine discovery. For no truth can contradict truth. That’s a great comfort and impetus to never stop taking the risk of exercising one’s freedom to ask questions and seek a deeper knowledge of reality, not only on one’s own, but in discussion and dialogue with others.