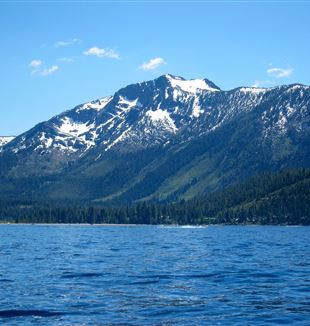 One sunny Saturday morning this past May finds about 120 university students, gathered from all over the country, in a conference center at Lake Tahoe. The music (Beethoven) winds down and the assembly begins, against the backdrop of the Sierra Nevada mountains far across the water. A Spanish priest, Fr. Antonio Lopez, from the Priestly Fraternity of St. Charles Borromeo, presents the opening lesson for the CL University Student Vacation 2009, which centers on the theme “Something That Comes Before.”

Time Present and Time Past
Among other points, Fr. Antonio insists that, if the Mystery is truly incarnate in our temporal dimensions, then the passing of time itself is not a phenomenon to be dreaded but rather, that it’s a friend, because it is through time that Christ makes Himself known to us. Planning difficulties had resulted in a short vacation which gave us just a bit over three days to spend together, so the need for Fr. Antonio’s words to be true became all the more urgent. If the experience we lived there together wouldn’t be one that would unfold and extend itself into the very circumstances of life and all the time of all the other 362 days of the year, then it would be pretty futile. In the witnesses who spoke at the assemblies and in our conversations, it was clear that this new sort of story is indeed realizing itself in our lives, a new order within the old. A Presence, “something that comes before,” has entered in and generates a new existence for us in which time, distance, sorrow, 8 am classes, and even our own past mistakes may be for us, and not against us. Fr. Antonio reminded us that in our every betrayal, we ourselves are never betrayed: “God is faithful; it is man who runs away… Christ comes to seek us there where we thought we could not be found.”

It was in the faces and the stories of our friends, then, that our hope became clear, beginning with the witnesses who spoke the evening following that first lesson.

Witnesses
Phil Facconti talked about the changes in his life that began to happen after his initial meeting with his history teacher, Chris Bacich, during his freshman year of high school in Brooklyn. In Chris, he saw a fascinating person who could speak passionately about life and happiness and, and ultimately Christ. Nonetheless, three years passed for Phil in avoiding what Chris was pointing toward, until he attended some GS meetings and found the same faith which he had already categorically rejected. After Chris left the school, Phil realized with a shock that his questions couldn’t remain unanswered. He tracked down his former teacher, who was by then teaching in a different school on Staten Island. They met at a Dunkin’ Donuts, of all places. Then Phil said yes, decided to follow. Since then, his life has opened up–among other things, he has rediscovered his passion for music, and found someone to follow–Jonathan Fields–to turn the passion into work.

The encounter can also happen by phone. Peggy, from New Jersey, spoke of how her friendship with Martina, a Ph.D. student at Rutgers, allowed her to be free, even in a situation which would be otherwise suffocating. She was studying information science engineering fulltime while working as a babysitter fulltime, and living without her family for the first time. Everything changed, however, with Martina’s claim, one night in a telephone call, that sadness could be a starting point to ask that the only One who can take care of you care for you. “It was in that moment that I stopped crying.”

Francis Petrucelli talked about his experience at Benedictine College in Atchison, Kansas. He recently completed a course on modern American poetry, summarized as “a lot of questioning with no answers” which he could nonetheless face without despair. Reading this same poetry, written by great men with great questions, he realized that these writers are, in the words of Wallace Stevens, “those who would have wept to step barefoot into reality.” This possibility is extended instead to us, most of whom rarely have the awareness to be so moved as to weep for the truth we’ve been given, and yet the fact remains, incontrovertible, as Francis said: “Christ came to find me before I was even looking for Him.”

This ability to “step barefoot into reality,” given by an unforeseen grace, was echoed by Tim Herrmann from Berkeley when he talked about a concrete experience of meeting, through friends in California, “this Giussani guy who understands me way too well.” In meeting Christ through CL, he found a new clarity and understanding for himself, in which he can say, “Now I can call things [heart, desire, freedom] by their names.”

Studies
This encounter inspires a different way of facing the circumstances of life at the university, above all one’s studies, as Amy, Everett, and Juliet, told us on Sunday night. Juliet Joly, from Notre Dame, spoke about judging and living through the controversy over Obama’s participation in her university’s Commencement ceremony. The negative circumstances of division and anger became for her instead an opportunity to know Christ better in that place. Friends such as law professor Paolo Carozza helped in asking the questions at the heart of the matter, which under normal circumstances go unconsidered: “What is at stake in a Catholic university and what does it mean to study as a Catholic?” Ultimately, the CLU students’ response put Christ at the heart of all truth and learning. This judgment and the renewed relationship with her friends presented a challenge for Juliet even in her studies in psychology, where she began again to go to the root of things in the question of the human person.
Amy Sapenoff, Master’s student in political theory at Catholic University of America in Washington, DC, talked about the excitement of discovering a new approach to the graduate seminar: start from the desire for truth, rather than an abstract interest in making theoretical comparisons between thinkers. This search made studying worthwhile even when the academic success she planned on was not fully realized. Similarly, Everett Price, from Georgetown, talked about his work and passion for regional studies of the Islamic world, a field that often shifts to a reductive single focus on security and defense. Instead, the promise that his fulfillment may be “real and encounterable” in his daily life has woken him up to take an interest in the humanity of the people and the culture he studies, to ask, “Who are they?”

From Within
This was what made those few days worthwhile: a meeting with people possessed by a different sort of concern for truth, a people possessed by Christ. This even made the 4:00 am alarms to catch early planes or the four-day epic roads trips from the East Coast that some of us endured worth it. In leaving, it was valuable to keep in mind that, in fact, that encounter wasn’t to end there. It’s worth remembering the words of Anne Maguire in explaining why she came on her first CLU Vacation, after having met the Notre Dame community a few times back at school: “How could I be sitting there with such amazing people, listening to the truth of my life, and not want to stay with them?”

In all of these friends, it was imminently transparent that in the Church we are placed in front of a God who extends a hand to us precisely from within our problems and bad days, in everything from working to pay for school to studying abroad to political scandal. Our life together, then, does not exist in a separate spiritual sphere, but is being built exactly from within that life. We are average students, and the witnesses were reminders of a grace given to us both unexpectedly and yet in total correspondence with ourselves. It’s a grace that lets us live as ourselves, more human with every passing semester that we follow it.