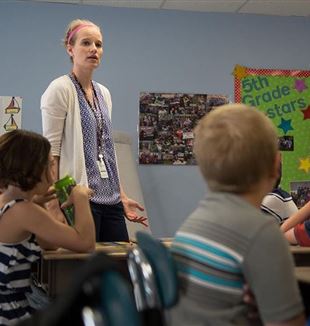 There are no shortcuts or easy ways out. “This is man’s choice: either the conceives of himself as free from the whole universe and dependent only on God, or free from God and therefore the slave of every circumstance.” These were Fr. Giussani’s words, repeated by Fr. Carrón when he threw down the challenge at the Exercises of the Fraternity last year. And it was the same challenge issued at the meeting with CL teachers held in Milan last October 14th. Five thousand teachers had gathered to talk about “thirty years of presence in the schools,” in the footsteps of the assembly which Giussani held in Viterbo in ’77. From that meeting, a work was born, with assemblies, resolutions, and discussions held across Italy. Franco Nembrini was present at many of these occasions as Director of the CL Educators (CLE) group. In recent months, he has literally toured the country, but above all he himself embraced the challenge in those words. “I was the first to be called into question, radically. I had begun teaching again after many years of absence, and on my return I found that the situation was quite different from what I’d imagined. There were new difficulties. ‘If you’re not free in class, it means in reality you’re never free. Yours is a problem of faith,’ Fr. Carrón told me. Yes, after thirty years in the Movement, my faith is still at stake. A real blow. Making a new start required accepting this provocation, calling myself into question, and showing what I’m really attached to–whether to God or to something else. The point is how I come out of class, defeated or victorious, whatever happens while I’m in there. The question is, ‘To whom do I entrust my success, and hence my life?’”

A new beginning for all, from Lombardy to Apulia, from Calabria to Lazio, and beyond. “The assemblies offered testimony to the personal and dramatic attempt to renew our commitment,” says Nembrini. “This was demonstrated not just by the words we heard but also by the large number of colleagues who were invited and showed up.”

While looking ahead to the next meeting with Carrón, planned for May 18th, we have revisited some of these scenes. They reveal, with the simple power of facts, what happens when we take our humanity seriously, confronting reality as it is.

Modena. Cristina teaches literature in a vocational school. One morning, she was substituting for an absent teacher. It was the first time she had entered this particular class and she would probably never see it again. As soon as the lesson began, there was an act of aggression, but she failed to identify the culprit. “I could have done one of two things. Either react in the usual way, which was fully justified, imposing discipline and letting things take their course. Or I could get to the bottom of it, out of my own need for truth and justice, powerfully provoked by that random act of violence. I had to put a name to it.” She urged the kids to tell her who had done it, to give a clear account of what had happened. No one spoke up. The lesson ended and the class scuttled away. But the possibility that event had opened in Cristina’s horizons never vanished completely. In fact, it aroused expectation and curiosity. “Either I backed down as usual, or else I had to treat it as a chance to verify what Carrón told us.”

She wrote a letter to the class, saying she was open to a meeting until Saturday. Her principal and colleagues were struck but skeptical. They told her not to expect too much. A lot of them had made an effort with the class, but they continued to be “heartless and hopeless.” The days went by. No one contacted her. Then, on Friday afternoon, she received a note: “Hi teach, please forgive me. I’ve understood my gesture and yours too. I’m too ashamed to say who I am, but I wanted to apologize.” This was the gist of the note’s opening and it went on with a heartfelt and clumsily expressed mea culpa. “I can identify with that boy who can’t even write properly,” say Cristina. “I think of the moment when he decided to pick up his pen, just like the decision I made in class. He must have felt free and true, at least for a moment, just as I did, because calling things by their proper name (even saying ‘wickedness,’ if necessary), leaving yourself defenseless, is more important; leaving open the wound of a longing for real meaning is a possibility, at every instant.”

Locri. Irma is 28. Last November, she began teaching in Locri. This is one of the three towns, together with Africo and San Luca, that her pupils ironically call the “Bermuda triangle of Reggio Calabria.” It’s the heart of the ’Ndrangheta, Calabria’s own version of the Mafia. She was given the class most feared in the school, the notorious 2B. Not too long ago, they threw all their desks out the window. Thirteen girls and one boy. The situation was disastrous. She was met with antagonism and mistrust. The girls never left home except to come to school. Their sole concern was to find a husband. They recognized no authority.  Africo and San Luca were locked in a power struggle and the girls from these two towns were so hostile they even refused to be tested together.

It was a battle between Irma and the class right from the start. “I never gave in to the hostility of my pupils. But I couldn’t expect them to learn anything unless I got involved. I eliminated almost all the homework and began to work with them, in class, every day, trying to teach them how to study.”

But one day Irma overstepped a boundary. She disciplined MC, the leader of the group, who stood up and threatened her. On returning home, she began to realize how serious this was. Disciplining a girl from Africo meant pitting herself against the whole class, as nearly all of them were from the same town.

The next day, surprise! The class was strangely docile. MC was absent. Irma asked about the cause of that unnatural calm. The only boy in the class replied that their classmate had gotten off lightly because she was a girl. He would have beaten up any boy who dared behave like that to their teacher. The rest of the class agreed. They had placed their loyalty to their town–normally untouchable in these parts–in second place and were affirming their loyalty to her. “I’ve come to see clearly that education is truly total involvement, an act of mercy. It’s an imitation of the gesture of God, who descended into the depths to affirm His relationship with me. To educate those kids, I had to bend to their mentality, to identify with it.” 2B is never what you expect, what you want. When Irma sees the class is on her schedule, she feels expectant, nervous. In the classroom, she’s forced to ask herself: “Who am I?” She no longer thinks in terms of “What should I do?” but questions her own being. “These young people have shown me the correspondence we often speak about, what really makes us grow, sets us before our own ‘I.’ So, paradoxically, this is the class that is dearest to me.”

Bergamo. At La Traccia, the school of Calcinate, a group of novice teachers begins a series of talks with Franco Nembrini. “I needed to talk about what was happening in class, verifying my choices,” says one of them, Francesco, who teaches Italian in a junior high. These daily conversations form a path of learning. They’re so riveting that the group has grown. It began as a simple get-together with bread, salami, and grappa, but now it’s a regular event, a place where they can thrash out the problems of life at school and swap ideas. “I feel I’m not alone in carrying the weight of educating, which is so much bigger than me,” says Silvia after the first meeting. Out of this have grown the “Sunday evenings for teachers.” Word got around among the members of SSIS [Teacher Training School], and groups began to arrive from Milan and other parts of Italy.

In June 2007, Carrón asked to meet them. “A decisive moment. ‘The first question is the work you do on yourselves through the whole course of your teaching,’ he told us.” Today over a hundred of them meet. “After October 14th,” continues Francesco, “we put this provocation at the center of our work: ‘Do we ever risk verifying Christ’s presence, instead of giving up a moment too soon?’ I accept the challenge in every lesson I teach. I have a pupil, the typical difficult boy. For years, he’s been in treatment with a psychologist. Now, I understand that, to avoid treating him as the usual hopeless case, the only way is to start from what he makes me experience. I haven’t done anything special in class. But the psychologist came up to me and asked what’s happened to him. This presumed hopeless case, in spite of all the psychoanalytical theories, had started talking to his mom again. All he needed was for someone to take him seriously and respect him for what he is.”

Taranto and environs. The starting point was definitely the announcement on October 14th. Coming from all over Puglia, 160 people turned up for that meeting. The first thing that struck the teachers was not the effort of the journey but surprise that their purpose had been understood. This was followed by amazement that someone had come looking for them, that someone felt love for their life, their work.  And now everything is happening in class, says Angelo, a philosophy teacher at the high school in Grottaglie. “A pupil of mine asked me, ‘If God didn’t exist, would I really be here in class?’ I was moved and began to take a special interest in him. With him, we set up the first group of School of Community, as a natural continuation of what was happening at school.”

Rome. You can be deeply moved by the words you hear at the meetings. You can understand just how radical it is to propose putting our relationship with Destiny at stake. But then there’s the risk of letting it become just a large resolution which you dust down on the days when the meetings take place and when you talk about it every so often with your friends. But life is stubborn; it always gives you a second chance. That’s what happened to Cinetta, who teaches literature in a high school in Rome. “The assembly on the 14th wasn’t enough for me. It was only later that I realized it wasn’t a question of directly applying the ideas Carrón had presented but of changing myself. It was the possibility of a new relationship with things.” This prompted her to start a School of Community with the other teachers. “When there was that business at La Sapienza, I got involved with what was happening. Instead of entrenching myself behind reasons valid in themselves, this time I decided to write a letter to my colleagues, asking them a question: ‘What is involved in introducing our young people to a knowledge of reality?’ I could never have done something like that so freely if School of Community hadn’t helped me see myself in a continuous relationship with a Presence that enables us to look at things and go beyond just taking up a position.” A colleague of hers adds, “First, whenever I opened the classroom door, my only thought was: ‘They won’t have studied today either.’ Now, when I’m in class, I’m curious to see how the Mystery will reveal itself today. And my expectation completely changes the way I look at myself and the kids.”