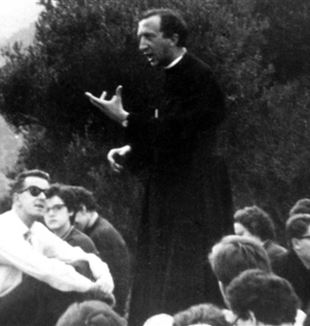 On February 12th, various generations of Berchet students gathered in the auditorium of the Milan high school on via Commenda. All told, they represented fifty years of history, gathered in the name of Fr. Giussani. On the third anniversary of his death, “The Management Committee decided unanimously,” the school’s Principal, Innocente Pessina, underscored, “to remember, by means of a plaque, this important personality who taught here.” Introducing the speeches by a student from the early days, Claudio Risé, by a present-day student, Marco Pisa, and by Fr. Carrón, Pessina said, “Today, it is even more meaningful to remember a master like Fr. Giussani, because what some have defined as an ‘educational emergency’ is before everyone’s eyes; even the Pope spoke about it some days ago, and those who work with young people can confirm it. Every day, I meet parents who declare that they are powerless before such frailty, unease, and even a little resignation.” His appraisal of teachers was also very acute: “I see many teachers content to pass on some information, some disciplinary norms, and some skills. All these are important, and quite right, but I believe that the school’s task is more ambitious: the task of educating. In order to educate, you have to believe in the things you do and say, because education passes through a personal relationship in which the adult offers himself as a witness, with his own beliefs; if the educator is empty, he will teach only emptiness.”

So what is education? Pessina answered with an image that certainly would have won Fr. Giussani’s enthusiastic approval: “Education is a fullness that overflows, like a vessel that is too full, brimming over; it is the overflow of what you have inside that convinces you so much that you cannot keep it for yourself, but must give to someone else, so as to ‘infect’ him. I didn’t know Fr. Giussani, but I think of him as a person so rich, so full, so convinced of his own values that he could not but communicate them to others.”

The seed and the oak tree.  Words of greeting were offered by Roberto Formigoni, President of Lombardy, who, during Giussani’s high school days, was a student in Lecco: “I had never seen Berchet High School, but by means of Fr. Giussani’s words, his stories, and his emotions, we saw these classrooms, these walls, those steps, the teachers, the students, the debates, and the life–the explosion of something unexpected and surprising that moved us and won us over, too. Fr. Giussani never forced anything on me; his was always a provocation of our freedom and of the use of reason.” Bishop Luigi Negri was his student in the mythical “section E.” He told us, “As I climbed the steps, I said to myself, ‘Look what a powerful intuition Fr. Giussani had! The oak tree is already wholly present in the seed’. In those years, in the daily dialogue between  a great master and our adolescence, a miracle happened of the passing of the faith from his heart to ours, in such a way that our whole life came to be marked and we gave our contribution to the oak tree born of his heart, which now challenges the ravages of time and looks courageously to the future.”

Then it was the turn of the psychoanalyst Claudio Risé to speak, Fr. Giussani’s student since 1955 (who had proposed the memorial plaque). “He was a true educator, impassioned with the two basic movements of educational action: to nourish with knowledge and to make grow; to bring out, extract what risks remaining hidden and inactive in the lazy and rather sleepy personality of us adolescents. He trained us to recognize what he called the deepest needs of the heart with which man lives everything, and which he called ‘elementary experiences,’ the deepest meaning of which I recognized clearly only much later in my work as a therapist.” What was his method? “That of freedom, which he saw as being composed of intelligence and willpower. Then, in his vision of education, reason played a central role. He rescued us from the temptation to take refuge in a cold intellectualism, thanks to his proposal of reason understood in a broad sense–partly because he associated it with something that at that time (long before the days of Benedict XVI ) few did, which is to say, with faith. Faith, he said, is a method of knowledge, and what knows is my reason. And faith comes to know something about the object by means of a witness: Christ, He who breaks the prison in which the ‘I’ is closed up and opens it to the world, to knowledge. As a psychiatric practitioner, I say that a witness of reason in faith is someone who frees you from the psychosis of adolescent omnipotence and brings you to the full psychological and affective development of a young adult.”

Familiar and a friend.  Then Marco Pisa spoke, an eighteen-year-old student of the Berchet today: “I have never seen Fr. Giussani, except in photographs, but for me to think of him is different from thinking of other educators and charismatic personalities, because he is in some way familiar and a friend. His charism, the human drive with which he lived Christianity, reached me indirectly, through my parents, and in a more evident way through the Movement of people he began in this school. I have been changed by the encounter with these people in a way I never expected. What I have received from Fr. Giussani is not a philosophy of life, but a wound, that is, an inability to be satisfied, the desire for a greater intensity in life, which I have seen in some people to whom I have become attached. In this way, even study becomes an opportunity of growth for me, and not only something I do to get good grades, or a place in the university. My commitment to the scholastic elections is a way to improve the situation we are living in. This education to perceive reality more deeply and intensely is the wound I spoke of, and that is what I received from Fr. Giussani. This makes me freer and more certain of the road I have set out on and I am grateful to Fr. Giussani for this.”

In presenting Fr. Julián Carrón, the Principal noted, “He has had the courage to take over the exacting role that Fr. Giussani left three years ago.”