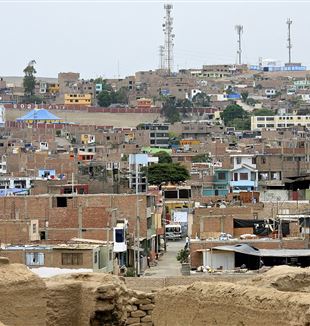 Fifteen Peruvian university students from the Catholic Sedes Sapientiae University in Lima took part in a study and work internship, in conjunction with the Università Cattolica del Sacro Cuore in Milan, Italy. The experience enabled them to observe first-hand the work of eleven companies and four private schools in Lombardy. Returning home to the classroom, they did not just bring back with them the memory of a one-of-a-kind experience because of the total, gratuitous hospitality of the families and the richness of their human and professional encounters. They also bear the desire to recreate in their own environment what they saw: the ripe fruits of a solidarity between CL students and workers that over time has generated efficacious answers to their own and others’ needs.

In the situation of Peru, this protagonism is needed more than ever; the dramatic events of recent months and the state of emergency of many provinces have brought out the centrality of the question of education.
The initiative of the bishop of a new Peruvian diocese, Bishop Lino Panizza, made the “dream” of a center of higher learning to form “responsible professionals and free men” (as the Statute says) begin to take concrete shape in an area of Lima with more than two million inhabitants. The idea came out in 1998, together with the conviction that the answer to the very grave social problems (practically non-existent families, enormous unemployment, unprotected, informal labor, the absence of public services and structures for young people, the high rate of juvenile delinquency…) could come by starting with education, i.e., by training teachers capable of “educating the new generations to the exciting task of forming persons and inserting them into the real world with a sense of responsibility.”

Reference point
The Sedes Sapientiae University was founded on Pentecost 1998, and opened its doors in February 2000 with a center for preparation for the admission exams, obligatory in Peru, and with 550 students enrolled in the two faculties of Economics and Commerce and the Science of Education. Today, after just four years, enrollment is 2,200.

In the “Cono Norte,” as the area is called, the University is a reference point for many different spheres, in the ecclesial world–diocesan, parochial, and religious-run schools–as well as in the public schools; and various educational centers have already requested students from the University to take part in their training programs (obligatory in the Peruvian university structure). The University Center for Support to Small and Medium-sized Businesses (CEASE) is on the way to becoming an indispensable point of reference for businesses. Its courses, the fruit of ongoing market research and statistical analyses produced by the University’s research department, are well appreciated and have fostered a network of relationships with important institutions in Peru, such as the Italian Chamber of Commerce and the Advanced School of Administration in Lima.
Recently, the commitment has been to improving the level of the studies and the quality of the teaching. Not all the students start out on the same level, nor are all of them capable of university study. The often precarious financial situation of many families means that they cannot afford to pay tuition regularly (even though it is the lowest tuition of the 16 private universities in the capital), and this has negative repercussions on the students’ commitment to their studies. With this situation in mind, the University has created various forms of student aid, especially for the most deserving: scholarships and work-study plans, including jobs inside the University itself (library, cafeteria, snack bar, publishing office, etc.). A substantial percentage (about 15%) of the young people can thus continue their studies.

High-level offerings
The efforts being made in this direction are accompanied by constant attention to high-level academic and scientific offerings. In many courses (especially the general courses in History, Letters, Ethics, and Theology, required in all Catholic universities), outstanding Peruvian and international figures speak on various topics: bioethics, inter-religious dialogue, the social doctrine of the Church, historical and literary questions, and economics (on “Economics Wednesdays,” presenting emerging figures in the business world). During the annual inspection visit from the national university authority (CONAFU), one inspector, a former pedagogy professor, expressed his surprise in this regard by saying, “Here you do not have just a process of reciprocal teaching and learning between two players, the teacher and the student. There is also a third factor: reality.”

The horizon of the world, in short, comes into the University with its problems and needs. After the tragic events of September 11th in New York, or during the conflict in the Middle East and the war in Iraq, or after the long strike of 280,000 teachers in Peru, free discussion groups were organized so as to know, understand, and judge what was happening. For last year’s “International Congress” organized by the university, the decision was made to approach the theme of education decisively. On this occasion, Professor Javier Prades, from Madrid, presented and commented on the contents of the book The Risk of Education. His talk not only expressed a judgment on the reality of education in modern society, but also outlined what the University aims to be at this moment in history.

Fr Giussani had already foreshadowed this in his letter read by Bishop Lino Panizza during the opening ceremony for the first academic year, 2000: “The birth of a Catholic university represents an intriguing challenge, which fills with enthusiasm those who have faith in Jesus. This is to prove to the world, through teaching and study, the rational character of faith, a faith that has to do with life and that places the person in the best condition for facing every circumstance and every problem that emerges daily.”

New initiatives
While the University has tried to open up to the world in these years, the “world,” a great many friends of various nationalities, has come into the University. The relationship with CESAL [Center for Studies and Solidarity with Latin America] of Madrid and Lima has enabled the construction of new teaching structures and fostered the work of research into the economic reality of the territory. Collaboration with this Spanish NGO has given rise to an avant-garde educational work in Huachipa, one of Lima’s poorest slums, similar to the favelas of Brazil, where some students are doing their training. The aid that some Italian families have entrusted to Fr Michele Berchi and Fr Giovanni Paccosi, theology teachers responsible for the University pastoral program, has been put to scholarships for students in the University. A group of friends at the Bocconi Business School in Milan, gathered together with the name “Allopera,” is a permanent reference point for the University. Relations have also begun with people from the Cultural Properties Consortium in Turin, with whom an important congress was organized in January; and Philosophy teachers from Turin and Bari held a seminar in Aesthetics in June. Two other important international congresses, one in November on Bioethics and one in April on Comparative Literature, should also be mentioned. Support from the Region of Liguria has enabled the opening of a multimedia center, which allows the University to have academic contacts with European universities. Finally, collaborative relations have recently been established with the virtual university created by the initiative of Fr Carlo d’Imporzano in Colombia.