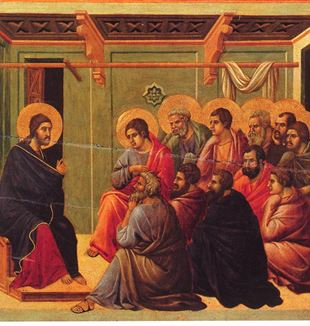 To hear the three testimonies offered the first evening in La Thuile, education is something that loses the connotations of role, structure, and organization which instinctively come to mind, to become the trajectory of every person’s life, a journey that is made over time. It is mercy in action, by which God comes to meet us where we are.

The first to speak was Franco Nembrini, from Bergamo, Italy, the fourth of ten children. He started “from way back,” with his parents, his father who would kneel every evening in the boys’ room (there were seven of them) and recite the Our Father, and his mother, a simple soul, who “died saying to me, ‘I am sorry to die, because now that you are all a little older, I could have done some good.’” He recalled the 1970s, the protest years. His relationship with his parents entered a rocky phase, and Franco went into crisis–a religious, existential crisis that made everything, his closest relationships, his friends, seem insubstantial, useless. “One evening, when I got home, I opened the door and saw my mother at the end of the hall, washing the dishes. I shut the door and went away crying, because I had the overwhelming sensation that something was taking her away from me. My love for her was not holding; all of life was losing its substance.” During that same period, his eldest brother left the seminary and founded a left-wing protest group. This caused his parents enormous pain. Then something dazzling happened: one of the three girls took the path of the cloister, and Fr Giussani, who had followed this vocation step by step, came to dinner at the Nembrini house. “It was an immediate, total love between him and my parents.” The ex-seminarian was not at home, but the following week Fr Giussani sent a package for him. It did not contain Bibles and Gospels, but a complete edition of Marx’s Capital, as though to say, “Get to the bottom of what you believe.” “That day,” Nembrini continued, “I had the first serious suspicion that God existed, because only God comes to meet you where you are, without asking you to change, with your interests, your sins, your temperament.” This was the turning point for Franco, followed by the first Triduum in Pesaro and the return to school (“I had dropped out because I couldn’t stand it any more, being in the middle of a bunch of irresponsible people, the teachers!”). He fell in love with a girl (“Before, my theory was that love was impossible”) and got involved in his studies, in particular Dante. “God started answering. Thus, I became a teacher. All I wanted to do was go around telling the kids that it was possible to live, that things balance out in the end, that reality is true, great, and beautiful.”

His story continued, dense with concrete actions, from setting up a new school to becoming responsible for the school division of the Company of Works, to organizing lessons on Dante for his son (these have now grown into Sunday meetings with more than 200 students!). “The only testimony you can offer your children,” he says, “is that you live something great. They watch you. They always pretend to be playing, to be interested in something else, but in reality they are always watching you out of the corner of their eyes. Your task as a father is simply to look to an Other. They go off and–always out of the corner of their eyes–they look to see if you are still there where you belong, if you are a home for them, and they will come back, a bit like the Prodigal Son. This solidity, this certainty that you have and live with your friends and your wife, is the only thing children need in order to be educated, no matter what happens.”

The second to speak was Mariella Carlotti, an Italian teacher in a vocational school in Prato, Italy, where the students are “of different kinds”–many are particularly rebellious and difficult. How can one face these kids who have everything in mind except studying? “For many years, I have perceived the Movement as something I know, and reality as the terrain of application, of communication of what I know. But this year it has been different, because I looked my students in the face, and for the first time I have felt for myself the difficulty they were experiencing and the way that studying is something totally foreign to them.” It was necessary to break through their shells in order to start moving together. How to do this? “By putting something beautiful in front of them. I had them listen to passages from Mozart’s Requiem, reading Fr Giussani’s liner notes to the CD. There was complete silence in class, and at the end, one of them, the head of the anti-globalization group, said, ‘Miss Carlotti, will you lend me the CD? But with the liner too!’ The next day, he came to see me and said, ‘I listened to the whole thing. It’s beautiful!’ In front of something beautiful, you don’t have to know what to say, except, ‘It’s beautiful’–you just have to have a heart.” The journey together started that day.
She recounted another episode: at the end of the year, Mariella invited them to spend a few days together to study for the final exams. Twelve signed up, but an anonymous letter to the principal suggested that it was not a good idea for the teacher to go away with her students. What was the students’ reaction? “Miss Carlotti, I’m going anyway, even without you, because I am interested in this proposal.”

Barry Stohlman lives in the Washington, DC, area and is a cabinet maker, a trade he learned in Italy, spending nine years in Crema. He is married with five children and a sixth on the way. “I work for myself,” he said, “and I take part in the intense life of the Movement in the United States, which often takes me all over America. I do not spend too much time with my family, but all this is not an obstacle for me and my wife in bringing up our children. If it were not for the experience I am living, I would be much less able to transmit something good to them.” What is the point of all this? “In order to educate, I need to be educated myself; I need to be clear about the people I am following,” who have names: Maria Teresa, Giorgio, Jonathan, Fr Mauro, Fr Giussani. “My friends in Crema gave me a picture of Fr Mauro and Fr Giussani. I hung it up in my house behind where I sit at the head of the table, so that my children can see it behind me. Is this a ridiculous example? In any case, it makes you get the idea!” At the table, Barry and his children talk about their day, their homework, their friends. “It is a constant relating back and forth, the same thing that happens among me and my friends.”

Several months ago, the Pope asked people to recite the Rosary. “We recited it every evening before going to bed, and it was a way of saying to the kids, ‘Look there, where I too am looking.’”

The school year starts again in September. Four children will be going to school, “and the usual problems will come up again. Well, I am facing all this without anxiety, but with a peace given by the experience I am living; it gives me the certainty of being able to educate by being a father to them, sure that all this does not depend ultimately on me.”