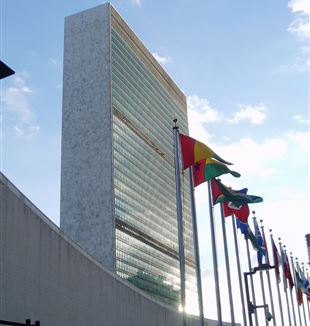 I entered the UN building in New York as a member of the delegation from the Holy See for the first time in 1995, for the plenary session of the General Assembly of the United Nations. This time, this past May, it was for the Session on Children.

We have seen the role of the United Nations grow, especially in its humanitarian function. It is true that the problem of poverty is enormous and touches everyone’s conscience. Four billion people live in a state of extreme indigence. The truth of poverty hurts our consciences: to try to reduce it to something that can be mastered is an understandable reaction, because we have repressed pain and suffering, but also charity.

From many-too many-sides, this illusion is worming its way in.

This summit on children, which was supposed to have been held in September 2001 but was postponed because of the tragic event of the Twin Towers, put great emphasis on the direct participation of children: when they were given the opportunity to speak, breaking the ranks defined by adults, they showed themselves in all their humanity, expressing the need for a meaning for reality and the necessity of a relationship with adults who can accompany them in the adventure of life.

We are adult educators; this is the great responsibility and great challenge which we took up, also through the presence of our NGOs (AVSI and CESAL) with Filippo Ciantia and Agnes Ocitti from Uganda, Claudia Terragni and Calin Pop from Romania, Javier Gavilanes from Spain, and which was given a voice in Ezio Castelli’s contribution to the panel on “Improving Educational Quality,” with the participation of large international organizations like UNICEF, Save the Children, and the actress Mia Farrow as good-will ambassador.

Hearing Giussani’s words, quoted several times by Ezio Castelli, resounding in the austere halls of the UN building, gave us a thrill, also because his words told about the concrete experiences now going on that were born out of our history.

He spoke of the work AVSI is doing with about 50,000 children and young people in the world. In Mexico as in Brazil, in Romania as in Uganda, children in situations of hardship and abandonment need to discover the meaning of their life in order to be able to face it and to improve it.

“Almost one child in five does not go to school; among those who do go to school, four out of five will not succeed in finishing the fifth grade,” Annan said.

We reiterated that one cannot speak of children, “categorizing them” according to their social ills and privations: child soldiers, exploited child laborers, child victims of sexual exploitation, sick children, starving children, street children, abandoned children… This is important and right, but unfortunately dramatically partial.

To look at a child in an impartial way, we have to look at him as a person and thus as a unique and unrepeatable being, with his fundamental ties–in the first place the family–thus irreducible to any power, any scheme, even if produced by an authoritative international organization.

It is evident in Mexico, at Oaxaca, where by constantly helping children to appreciate the meaning of study, the school drop-out rate has been reduced. It is evident in Albania, where the regime suspended the teacher training school, but AVSI has involved 200 educators in training courses, restoring to them professional dignity and a passion for themselves and their students.

If they forget the person, “good actions” like the forgiveness of debt, the increase in funds for development, the goals of eradicating poverty, and the institution of global funds (like that for the three great illnesses) risk encountering great failure.

What our charism educates us to has a universal value, and we are called to take it to all the world. In this new land of mission, it is more urgent than ever to fight for freedom of education and subsidiarity, which underlie respect for the person and the bringing out of his talents.