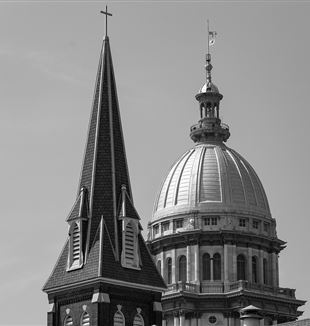 Do a somersault. Looking at the world upside down is the only way to understand the schools in America. This is a country where-formally speaking-private schooling is considered to be better than public. Public education is often better in small towns than in the big cities, but all you have to do is walk a block down the street to move from excellence to disaster, since public schools are financed locally on the basis of tax revenues and the richer a school district is, the more money it spends on education. This is a country that is almost obsessed by its "spirituality," but where for 37 years now, in obedience to the First Amendment of the Constitution, prayer in public schools is not allowed. And one where, on the basis of the principle of the separation between church and state, it is forbidden to finance directly (indirectly it is permitted) parochial schools, which are in large part Catholic schools.

Here too in America a movement has been growing for years in favor of school vouchers, because families want freedom of choice, but above all they want quality education and "social justice." The phenomenon got its start in the big cities. Here the public schools are unable to handle the grave problems (immigration, non-existent families, violence) that undermine the foundations of any kind of teaching or work of education that is not mere "social assistance." And the federal statistics on standards of education confirm the state of disaster. Private schools do better, but they are expensive. Thus only the richer students can afford them, creating a de facto form of discrimination. No one is blaming the rich, or private schools, for this situation. Here the discussion hinges on how to put poor families in a condition to exercise the freedom of choice that the more fortunate already have.

Supporters of the voucher system use this basic example: a girl in Los Angeles has gone to a Catholic school through middle school, which is the schooling required by law. Now she will lose her scholarship, and the Catholic high school costs $3,500 a year, a third less than the $5,400 that the Los Angeles school system would spend on her in public school, where the walls are covered with graffiti and gangs shoot at each other. Her family has no money and thus has to resign itself to the degradation of the public schools. But if the State of California (or the federal government) gave them directly at least a part of what it costs to educate her, the family could choose the school they prefer.

At the moment only two cities in the United States have tried vouchers: Milwaukee, Wisconsin, where last year a pilot project was set up, as an exception to federal directives, in which about 6,000 of its 107,000 students receive a voucher; and Cleveland, Ohio, where the number is 4,000 out of 77,000. Also, in Florida, a program has been approved in which poorer students can use vouchers. This all amounts to less than 1% of the student population, but other states are moving in the same direction, and bills in favor of vouchers are pending before Congress.

Supporting vouchers are many religious organizations and parts of the Republican Party, a party that adheres to the creed of laissez faire also on social questions. A guru of the pro-voucher movement is Milton Friedman, who in a book published in 1995, The Role of the State in Education, maintains that every family should receive vouchers to spend on schools of their choice, and the state should limit its role to ascertaining that "authorized" schools follow standard curricula, in a sense like it ensures that restaurants maintain standards of health and hygiene. Public school teachers' unions, instead, are strongly opposed, judging the vouchers to be "a radical abandonment of public schools and public education," and their use in church-run schools a violation of the Constitution. In the last analysis, they are defending themselves, just like in the rest of the world. But in America they are less powerful than in Italy.

President Clinton and his administration are also substantially opposed to vouchers. Here the problem is less banal: in the last few decades it has been the Democrats, not the Republicans, who promised and developed public education, contributing to the creation also in education of the "Great Society," that "open society" overcoming economic and racial inequality which is an unquestionable value in America. For Clinton and his people, supporting and investing in public schools is, in essence, the most natural choice.

At this point we have to do another somersault. If the Americans have a gift, it is pragmatism. In the United States, it would never occur to anybody that it is the government's task to "educate." Nor even less to "direct" education. Simply, it is clear to everyone that the government has to guarantee the right to and freedom of education. And it has to do so in the best way and at the lowest cost possible. Therefore, the debate in the United States hinges on the question of whether vouchers can work better than public schools or not. There is no dogmatism: it is also possible to change one's mind.

Thus there exists in the United States-and it is growing-a "voucher left." Among its leaders is John E. Coons, a university professor who has been studying education for thirty years. In his studies, Coons has identified economic differences and the uneven distribution of subsidies as the weak spot-even "unconstitutional"-in the schools. He tried to remedy this by proposing a more equitable system of financing public education. But he was also among the first to propose vouchers as a "leftist" solution to the problem: the government offers poor families money in order for them to send their children to school in richer neighborhoods. What could be more "democratic" than that?

Certainly, the adventure requires an act of faith. But the supporters of school vouchers recall that in the nineteenth century land grants for universities were determined even by a roll of the dice. And American universities are today the most famous in the world. At this point, the somersault ought to be done by the left in the Italian government. Which is to say, those post-Communists who, like Veltroni, like to boast of their (improbable) kinship to American Democrats and Kennedy ideals. Among these is a quality education accessible to all. Not schools run by the State.