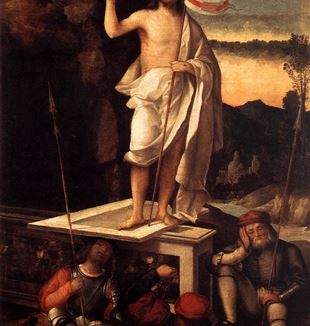 More than six thousand students participated in Rimini in the GS Easter Triduum, which was preached by Father Julián Carrón and Father Giorgio Pontiggia. At the beginning of this event, Pope John Paul II's message resounded: "Don't be afraid of youth, that is, of those deep desires you feel for happiness, truth, beauty, lasting love," as an appeal to view Christ's death and resurrection as part of His profound embrace of the path of young people. The reality of youth today is determined by a culture that has fear as its horizon: if everything goes toward nothingness, as the prevailing mentality preaches, is it possible to look at life opening up in a positive way, expecting something true for oneself? If everything is destined to fall into nothingness, then existence has no future and the only thing that remains is to grab desperately at the fleeting moment. Some momentary pleasure, characterized by flight or dreams, is what seems to be left for today's young people; a scrap of happiness, a surrogate for what the heart desires. Julián Carrón described this position as one of desperation, in which "you don't expect anything," and which is expressed in the "superficiality with which man grasps his time." Silencing the demand for happiness that resonates powerfully through young people is the task to which the powers that be have diligently set themselves and which they pursue with lucid violence.

A knapsack for the road
Within this limited horizon youth is, then, a dark shadow in which the human being begins to destroy himself instead of happily taking up his knapsack and setting out on the road toward self-fulfillment. The six thousand young people at Rimini were a sign of a contradiction to this culture of nothingness and fear; they have shown that a world exists not only of discontented and desperate youth, but also of young people who are aware of the desire for the infinite which characterizes them, and they witness this through their commitment to a hypothesis for response which has been proposed by reality. What these young people lived was not an exceptional moment, marked by a new form of escape-sentimental and religious-from reality, but they experienced the encounter and relationship with Christ who, through His death and resurrection, fulfills humankind's desire for happiness. This is an experience whose center is the living and present God, so concrete as to take on man's ills in the greatest gesture of love, so true that man finds in the sacrifice of Good Friday His human face. On Holy Thursday Carrón emphasized that without a presence capable of embracing it, "man's desire is corrupted;" in fact, Holy Thursday is the miracle of Christ's presence, "Destiny which offers itself up in order to help man along his path to happiness." No one has taken man's desire seriously, "except God, who became man to help every human being achieve his destiny, self fulfillment, happiness." For this reason, Christ's declaration, "I have called you friends," means: "I have eliminated the distance between you and destiny." On Good Friday Carrón highlighted the mystery of Christ's love, who by taking up the cross "makes a compromise with the miserable condition of humankind." And the fact that this is a mystery is proven by the fact that "man does not really realize to what extent of pain God bent Himself to pull him out of nothingness."

An abyss of tenderness
Love lies completely in this total submission to evil, so that the cross becomes the mystery of an infinite love, "an abyss of pity and tenderness" for the salvation of every human being. On Holy Saturday Father Giorgio Pontiggia pointed out that "resurrection" means the certainty that "Another shapes man's life" and "through the various circumstances directs the path of every person like a river toward its fulfillment." The resurrection is thus the keeping of His promise of a life in which desperation no longer dominates and the demand for happiness is fully answered. Within this simple path, vividly set forth, the young people at Rimini witnessed to a generation in love with life. This was done in the simplicity of their listening and attention, the profundity of their dialogue, their silent following of the cross as it wound its way through the hills around the fortress of San Leo, rejoicing in the new life being affirmed within the normal conditions of their existence. The Easter gesture made by GS is thus a small but real sign that today's youth are not suffering from a sickness of living that makes them tired and passive, but that there is an openness and willingness in these new generations, because their hearts resonate and wait for something or someone who will finally grant them an attention and embrace that are fully human. For this reason, just as at Rimini there were many young people who, faced with a proposal whose end point was reason, responded with passion, so in the context of daily life freedom goes into action if it is aroused. A challenge emerges from the GS Easter Triduum for all the adult world: not to complain about today's youth, but to be in their midst as a living sign that an ideal involvement with existence makes it worth living; and this happens where an adult communicates in a simple, elementary way his life and the reasons that fulfill it.