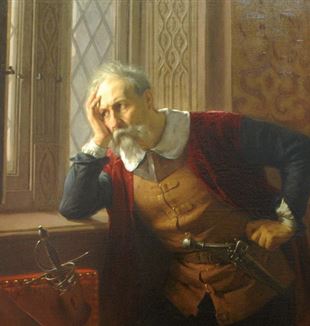 The following article was published in the Italian magazine Corriere della Sera on March 1, 2017.

as I think about Pope Francis’s trip to Milan, a page from a book that’s very dear to me, and that readers of the Corriere know well, comes to mind. I think it describes how many of us feel these weeks leading up to his arrival: full of curiosity and anticipation.

“As the light grew steadily brighter, he could make out crowds of people moving along the road at the bottom of the valley, some emerging from the houses, but others coming from farther afield. They were all flocking in the same direction, to the right of the castle, towards the exit of the valley. They were all wearing their Sunday clothes and walking very briskly. ‘What the devil’s up with them all?’ […] The Unnamed stayed where he was, with elbows on the window-sill, intent on the procession below. There were men, women and children, in groups, in pairs, and singly. One man would catch up with someone walking ahead, and would fall into step alongside him. Another would come out of his house and pair off with the first passer-by he saw; they would go on together like friends setting out on a pre-arranged journey. Their movements clearly showed a common haste and a common happiness.[…] He stared and stared, his heart filled with a growing curiosity, and something more than mere curiosity, to know what it was that could give the same powerful happiness to so many different people. Soon afterwards, the bravo came back to report. The day before, Cardinal Federigo Borromeo, the Archbishop of Milan, had arrived. […] When the master of the castle was left alone again, he continued to stare down into the valley, more gloomily than ever. ‘So it’s all on account of one man!’ he thought. ‘They’re all hurrying happily off to see just one man. And yet every one of those fellows down there must have his own devil to torture him. But none of them has a devil like mine; none of them has just passed a night like I have. What is it about that man which makes them all so happy? […] If he knew the word of consolation for me, now! And why shouldn’t I go too? Why shouldn’t I?... I’ll go, and I’ll talk to him” (A. Manzoni, The Betrothed).