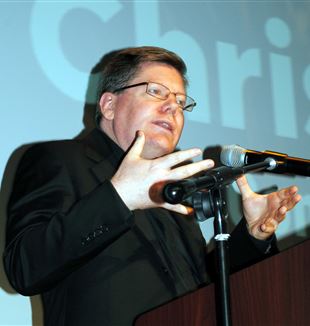 The following excerpt first appeared in The New York Times.

The priests will hear confessions in the box office, in the lounges, by the bars, 56 confessors offering mercy and solace in the unused nooks of an entertainment zone turned temporary arena of worship.

More than 19,000 of the faithful are expected to attend Pope Francis’ Mass at Madison Square Garden on Sept. 25, a Friday, and those who wish to may confess their sins in the hours before the service begins. The man tasked with orchestrating this spiritual prelude is the Rev. Richard Veras, a priest who has made a point of keeping a toe — or more — in the lay world since he entered the seminary nearly 30 years ago.

For Father Veras, 50, it is the latest step in a career shaped by a desire to spread his ministry in the wider world.

Though raised Catholic in the Bronx and on Long Island, he did not immerse himself in his faith until growing close to fellow Catholic students at Hofstra University, where he majored in American literature and communications. He worked as an advertising copywriter for a toy company after graduating, he said, until a friend invited him to a meeting of a Catholic lay movement called Communion and Liberation.

Communion and Liberation taught that “when you encounter Christ, the point is not that you have to become a priest or a nun, but you recognize the relevance of faith in every aspect of life — culture, art, science, family life, relationships,” he said. “At the beginning, at least, it was not mainly the Pharisees and religious types who were following Christ; it was people who were struck by his humanity.”

Thoughts of the priesthood persisted. “It was the idea that you can follow Christ and you can remain very much in the world,” he said, that finally drew him in. “I want to be a priest who works as much with laypeople as possible.”

After graduating from seminary and working as an assistant pastor in two parishes, Father Veras asked to become a teacher. The young people in his parishes, he reasoned, spent most of their time in school. He went to teach religion at Archbishop Stepinac High School in White Plains, trying to show students God’s moments of mercy in the Old Testament and rousing them from afternoon drowsiness with tales of dragons and monsters from the Book of Revelation.

After several years, however, the archdiocese asked him to become a pastor at St. Rita’s Parish on Staten Island. Sri Lankan, Indian and Filipino parishioners mixed there with Irish and Italian Catholics, each group with its special processions and Masses. The call to St. Joseph’s Seminary came six years later.

He has less direct contact now with the lay world than before. But his small part in Francis’ visit has made him reflect on the pope’s ability to reach beyond the church, even beyond the faithful. “This is a man like anybody else,” he said. “But everyone,even non-Catholics, have a sense that there’s something else here.”