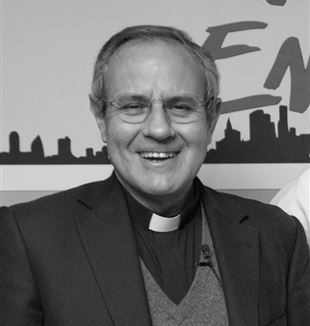 The President of CL: we must learn to live with the suffering of others. No walls on same-sex unions, the question is the way we acknowledge them.

Fr. Julián Carrón, successor to Fr. Giussani, says CL sides with Pope Francis: “We’ll take action to welcome migrants. We agree with him about divorce. And on same-sex couples: “We need dialogue, not walls.”


Fr. Julián Carrón, 65 year-old son of farmers in Estremadura, Spain, who grew up amidst a cherry orchard and was ordained a priest the year Franco died, is the successor to Fr. Giussani, leader of Communion and Liberation.

What does the title of your new book, “La bellezza disarmata” [“Unarmed Beauty”] mean?
“Beauty is the splendor of truth,” as Aquinas says, and so it doesn’t need anything from the outside to communicate itself; it has an attraction in itself that is sufficient, precisely because of its beauty. It seemed like an appropriate title for a book that is directed to a person’s reason and freedom, without imposing on either. The times we are living force us to recognize that we can only access truth by means of what passes through our freedom.”

You write that a “new beginning” is possible for Europe. Three months ago, Europe seemed to be dying. Now, from Greece to the migrant issues, things are moving. Will Europe become the “space for freedom” you speak of? Or is nationalistic or materialistic egoism destined to prevail?
“This is precisely the challenge. There is no ready-made answer. It’s an opportunity to rethink our lifestyle, overcoming the temptation to cling to formulas from the past. [Hannah] Arendt says that every crisis ‘forces us to return to questions’ and ‘demands new responses.’ It’s up to us to take advantage of the occasion.”

Writing about the education crisis, you suggest that “parents wanted to save their children from the struggle of living, at any cost.” Are our kids too spoiled?
“The problem isn’t the kids; it’s the adults. Are we offering them something that can challenge their reason and their freedom? Young people reveal the state of adults, they pay the price for the skepticism of their elders. They are more fragile than previous generations because of a weakened awareness that translates into a weakened affective capacity.”

You insist that there is continuity between Ratzinger and Bergoglio, for example on the relationship between faith and reason. Don’t you think that on some topics Francis is bringing about a shift in the Church that not everyone accepts?
“Certainly. Pope Francis is taking on, with great audacity, the immense challenges of our world, in continuity with Benedict XVI. I’m amazed that anyone could misunderstand his constantly calling us back to what is essential. I think that it’s because of a difficulty to recognize the monumental changes that are happening, which the Pope, however, is well aware of.”

What is Bergoglio’s attitude toward CL? Would you say he was severe in the audience he had with ‘ciellini?’ I’m sure you’re aware that some people within CL are very critical of him.”
“As he does with everyone, the Holy Father did not hold back from correcting us, calling us to be faithful to the charism we have received. Those familiar with the times Fr. Giussani corrected us when we were wandering away from the truth of the Christian experience would recognize that, if anything, Pope Francis was too gentle. So, we can help but thank him for such a paternity which even reaches the level of clear directions that every member of CL is called to treasure, about becoming self-referential, not confusing faithfulness to the charism with ‘cementing’ it, and not giving up our freedom.”

He’s a South American Pope. Some see a him as a bit of a populist. Are they wrong?
“Yes! It’s one thing to be attentive to issues regarding justice for the poor, to their needs and their rights; it’s another thing to be a populist. The Pope has too much concern for the dignity and destiny of each person to lump them together into a crowd to appease.”

Don’t the new norms about annulments just introduce a kind of “Catholic divorce?” Aren’t you afraid that they will lead to a weaker bond, watering down the sacrament?
“It’s not new norms that will weaken the bond, just as it wasn’t the old ones to stop the weakening. The only thing that will make the bond of matrimony continue to grow stronger is a sufficient experience of faith, without which indissolubility would be a utopia. Without budging in the realm of doctrine, the Holy Father took action based on the human context that has changed so radically, in which men and women decide to enter into the sacrament with an awareness that is often increasingly superficial.”

Europe is inviting Italy to recognize same-sex unions. In Spain, it’s already happened. Is it an irreversible phenomenon? Or should people continue to fight it?
“The spread of same-sex unions is a fact that’s evident to everyone, in our pluralistic society. The question is the way that we acknowledge them, and how that relates to the family founded on the relationship between a man and a woman, to children, to adoptions. We all understand that they are questions of great personal and social import. Not even same-sex couples can avoid certain questions. One time one of them asked me, while speaking about adoption: what consequences will the lack of a feminine figure have on them? And what effect will the idea of renting a uterus have on the dignity of women? There’s a need for a space of freedom which allows for dialogue that, instead of building walls, begins processes, as Pope Francis continues to say, including at the cultural and political level.”

Is it just to welcome all migrants, or only those who are fleeing from war? Will CL take action to welcome them?
“The drama of so many men and women in such extreme need pierces all of our consciences. No one can remain indifferent in front of the images we see on TV: I’m thinking of the recent initiatives of some European leaders and the EU, or of Pope Francis’s invitation to open parishes. Without a doubt, refugees take precedence, but we can’t stop other migrants from coming. Those in CL, who have long been involved in welcoming those in need in various ways, will find ways to respond to the requests from their dioceses.”

You know that in Italy, many “men of the cloth,” priests and cardinals, put on the brakes.
“This is not just an emergency. It’s a historical shift, and our response cannot be a merely practical, organizational one. We need a cultural change, a change of mentality. We’re called to live with the suffering of others. We’re called to conversion.”

In an interview with Corriere della Sera three and a half years ago, you said that there are no “CL politicians,” and that CL had to be vigilant to avoid being used. Do you think that you’ve managed?
“I think so, despite the fact that, by a kind of inertia, certain expressions inherited from the past are still in use. Today everyone distinguishes the Movement from the politicians who belong to CL, who act–and it could be no other way–on their own personal responsibility. This distinction is essential, and can only be good for CL and for the politicians.”

And yet Communion and Liberation continues to be accused of having built a powerful empire through the Compagnia delle Opere [Company of Works] (CdO). How would you respond?
“I’d say that this is absolutely false. An idea has spread, in some instances not without scheming, that the CdO is a kind of lobby that answers to the hidden empire of CL. The CdO comes from the free initiative of individuals to help promote businesses and non-profits. Like every activity, it’s always an ‘ironic attempt,’ as Fr. Giussani said: it’s susceptible to error. Each person can judge for himself if, in this crisis, the attempts to create jobs and respond to needs are something to complain about.”

What do you remember about Fr. Giussani?
“I remember a person overflowing with passion for Christ and for man. This is why he dedicated his entire existence to demonstrating how the Christian faith can offer a significant contribution to the lives of everyone, in today’s world, where it’s not easy to find a point of reference to keep oriented. I feel a boundless gratitude for having had the grace of encountering him; it was a turning point in my life to which nothing else compares.”

What is his legacy?
“An awareness of Christianity as a living event, which made it interesting once again for millions of people all over the world; a concept of education as an introduction to reality deep enough to find its meaning, in the height of a crisis of education; an insistence on witness as the way to show the relevance of the faith for the needs of life; an openness to all that is true, beautiful and good, in anyone he met; a respect and appreciation for the freedom of the person. I hope that I will not waste any of this grace received.”