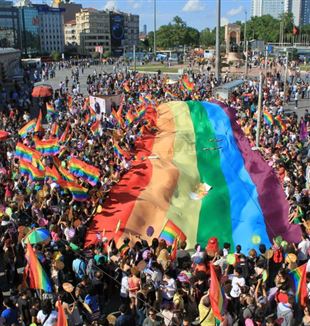 This article originally appeared in The Boston Pilot.


The power of the Christian announcement is something capable of renewing man and allowing him to rediscover a fullness of life, independent of favorable or adverse circumstances.

In the wake of the recent Supreme Court ruling on same-sex marriages, in which we gather more signs of a society repudiating an orthodox Christian mindset, we call into question how we stand before a turning tide. How do we react now, in the forthcoming legislation, and in this challenging climate? To answer this question, we believe it's worth looking at how Christian communities have historically and presently been called to live.

Today, like in Roman times, the faith spreads as a result of the encounter with people who live in an unexpected, but attractive way -- not as a result of political or military action. The power of the Christian announcement is something capable of renewing man and allowing him to rediscover a fullness of life, independent of favorable or adverse circumstances.

The first converts to Christianity encountered a new humanity that led them to "test everything" from their traditions and "keep what is good." As a consequence of this radical shift in mindset, they influenced societies and countries, molding their values and norms. However, in the absence of a Christian life where men and women continuously conceive of themselves in relationship with the Father, these norms and values will appear oppressive. Particularly, since the people will no longer see these morals as connected to their personal fulfillment. This is precisely what we are witnessing today. Many of our Christian brothers in the Middle East continuously remind us that Christianity flourishes despite challenging social and political situations. An interview with Archbishop Amel Shamon Nona of Mosul, reveals that their hope and serenity results from: "understand[ing] that it's possible to live, even here [...] Despite the risk of being killed in one hour or in one minute, it is possible to live every moment full of hope and joy". When facing struggle, the Church recalls the people to a renewal of faith --that is, to a rediscovery of what it means to live life centered in Christ. Archbishop Nona continues: "I myself began to live this way, and...over time, I noticed that the people changed too; the faithful were in need of this certainty. They were the ones to tell me that they needed to be more attached to our faith. It was they who told me that they began to live again amidst the many difficulties... A deeper understanding of the faith has made this possible. This is what gives us a clearer vision of life, regardless of whether this is a time of difficulty. This "deeper understanding of the faith," which is rooted in living life in relationship with God in the present, at this moment, still has the exceptional power to generate a fullness of life and an enduring hope.

Therefore, we should not look at the current situation in apocalyptic terms -- but as an invitation to examine ourselves critically. If the norms of our society once rooted in Christian tradition are changing, it is because we are proposing a Christianity that has been reduced to another lifestyle choice -- where fighting to assert moral values seems to have taken precedence over encountering and following people whose lives are unimaginably purposeful. The legalization of same sex marriage by the Supreme Court shouldn't be misunderstood as a call to action in defense of Christian values, but a call to conversion, a call to rediscover the method by which Christ conquers the human heart and carries the historically proven capacity to build civilizations.

The Christian proposal has neither lost its appeal or its capacity to deliver fullness of life. I see this with a North Carolina prisoner, who while serving his sentence encounters a group of people and lives his otherwise unbearably long prison term with gladness. I see that fullness of life in the serene face of a mother holding her dying baby. She chose to give birth to the child rather than terminate the pregnancy knowing that his diagnosed genetic condition would only allow him to live for a few hours at best. I see that fullness of life in the way a high school student embraces and accompanies his drug addicted father, who abandoned and mistreated him over the years. I hear it in the moving words of forgiveness of a grieving mother at the sentencing of her son's murderer. Laws cannot coerce nor guarantee people who live reality in a paradoxical way: fully human, yet impossibly divine.

The legalization of same-sex marriage by the Supreme Court should not provoke the militant defense of Christian values. We are not called to bolster the remnants of a society that was once rooted in the Christian experience, but to live it again, and in time, rebuild. Telling people what values to espouse is neither loveable, nor effective. Instead, we are called to live and share a fullness of life openly with everyone, within any circumstance -- whether they are welcoming or not. For this reason, a call to conversion is not a retreat from a hostile environment. In fact, it implies quite the opposite. While some would deem the public witnesses of our brothers and sisters ineffective or naÏve, this is the function of the Church in human history: to continuously testify that the fullness of life can only be achieved in total dependence on the Mystery. After all, as Christians we are not called to defend the Truth as a set of values, but to incarnate it.