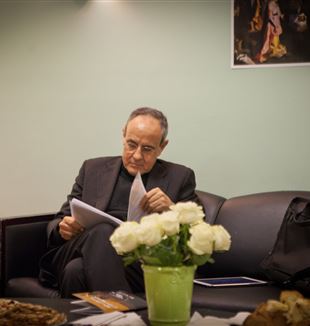 Rome. “It is a bitter disappointment. The ideal of the movement of Communion and Liberation is poles apart from the corruption that is emerging in the investigation on Mafia Capitale [corruption by members of the government of the city of Rome]. Seeing that people in the Movement are among those being investigated is a cause of deep sadness for us.”

Three years after he wrote a letter to Repubblica expressing his “unspeakable pain” for “what we have done with the grace we have received” (at the time some political exponents of the Lombardy Region linked to CL were accused of corrupt government business dealings) Fr. Julián Carrón, President of the Fraternity of CL feels the need to intervene again. In fact, the La Cascina cooperative, some of whose exponents are involved in the Movement, has been under scrutiny in the interceptions.

Fr. Carrón, is history repeating itself?
“Let’s wait for the judiciary to complete its inquiries. Their findings will verify whether these accusations are founded or not, but even just the possibility that a work of charity that offers refuge to desperate people can be soiled by activities of corruption and personal opportunism is an unacceptable deviation and a violation of the very nature of Christian charity and love. Pope Francis in his words on corruption calls us “not to put our hope in money or power.”

The investigation is looking into the possibility that the La Cascina group paid bribes to obtain the contract for providing services to the Cara di Mineo refugee center.
“Should this be demonstrated to be true, it would be of unprecedented gravity, to be condemned unreservedly, no matter who committed it, not only because of the pervasiveness and extent of the corruption and abuse of public funds that seems to be emerging from the investigation, but above all because the people involved would have been taking advantage of the weakest of the weak.”

It makes one wonder what CL educates it members to.
“The Movement educates to a conception of charity that is the exact opposite of the behaviour reported in the news these days. CL proposes to everyone, youth, students and adults, gestures of charity precisely in order to educate people to dedicate their time freely to help the weakest, the poor, the elderly, the ill, students in difficulty, the disabled, immigrants and others. Perhaps because of this, any mistakes made by CL members cause a sensation, as they go so counter to the Movement’s proposal and thus disappoint many of those who know us.”

Why do you think the name of CL sometimes emerges in the context of shady dealings?
“We are sinners like everyone, but I am certain that nobody who has been formed in the Movement and who belongs to CL could imagine that exploiting charity for your personal advantage is a justifiable behaviour. We want to educate adults to their responsibility for the good of all. But this is not mechanical, because our proposal is offered to the freedom of the person, who can accept it and follow it, or refuse it and follow their own projects and interests.”

Are you saying that belonging to the Movement is one thing, and personal activity is another ?
“People who do a work are responsible for how they do it. CL does not intervene in the way a member decides to do something in society, just as it does not enter into the management of a work, which is entirely the responsibility of the person who does it. However, I have to note that often whatever a CL member does is attributed directly to the Movement. CL always maintains an irrevocable critical distance not only from the political activities of its members but also from the works they do.”

How can someone whose belonging is lived as striving for the ideal end up degenerating to such levels?
“This is a question I often ask myself. At times it is because a person stops striving for the ideal; other times, in the effort to respond to the immense need that we see around us, a person can end up thinking that a good intention can justify everything.”

So then, what makes it possible to resist the temptation to corruption?
“We all know that our own effort is not enough. The only chance is to have a greater treasure that satisfies us more than some crumbs of power. Only a superabundance experienced and lived can enable this victory.”