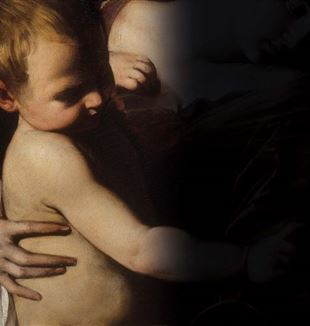 For me, everything happened like the surprise of a “beautiful day,” when one of my high school teachers–I was then 15 years old–read and explained to us the prologue of the Gospel of St. John. “The Word of God, or rather that of which everything was made, was made flesh,” he said. “And therefore Beauty was made flesh, Goodness was made flesh, Justice was made flesh, Love, Life, Truth were made flesh. Being does not exist in a Platonic nowhere; it became flesh, it is one among us.” That is the whole story. My life as a very young man was literally invaded by this; both as a memory that continually influenced my thought and as a stimulus to make me reevaluate the banality of everyday life. The present moment, from then on, was no longer banal for me. When such a “beautiful day” happens and one unexpectedly sees something of extraordinary beauty, one cannot help but speak about it to one’s friends. One cannot help but cry out: “Look there!” And that’s what happened.
Luigi Giussani

As a boy, at just 15 years of age, he was thunderstruck by the discovery of the mystery of Christ. He had intuited–not only with the mind but with the heart–that Christ is the unifying center of all reality, he is the answer to all human questions, he is the fulfilment of every desire for happiness, goodness, love and eternity present in the human heart. The wonder and fascination of this first encounter with Christ never abandoned him. As the then-Cardinal Ratzinger said at his funeral: “Fr Giussani always kept the eyes of his life and of his heart fixed on Christ. In this way, he understood that Christianity is not an intellectual system, a packet of dogmas, a moralism; Christianity is rather an encounter, a love story; it is an event.” Here lies the root of his charisma. Fr Giussani attracted, convinced, converted hearts because he transmitted to others what he carried within him after that fundamental experience of his: the passion for humanity and the passion for Christ as the fulfilment of man.
Pope Francis