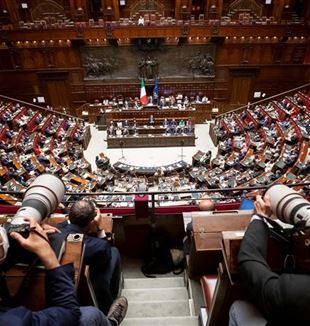 The result of the Italian elections highlights several aspects that are worth reflecting on. The first evidence is the confidence that a clear majority of voters gave to a particular political proposal, confidence on which the stability of the new government can be founded, in the hope that individual interests will not prevail over the urgent responses that the country awaits. The day after the electoral victory of the center-right coalition, Giorgia Meloni said that “it is time for responsibility.” This is a political declaration that, given the very delicate period that the country is going through, we cannot help but share and perceive as a call addressed to everyone: to the government, to the supposed majority that will support it, to the opposition that we hope will be constructive, to the institutions, and above all to civil society. Indeed, we hope that the new government will be open to considering and valuing its proposals, keeping faith with the electoral program backed by the voters.

What is the specific responsibility that the movement perceives as its own in this new stage of Italian politics? As outlined in the document On the Road to the Common Good, which was discussed in numerous public meetings throughout Italy before the elections, CL has taken seriously the Church’s invitation for all Catholics to get involved concretely in the construction of the common good from the start. Moreover, there has been much debate in the media about Catholic presence in politics, a sign that the question of what our contribution might be is alive, and suggests new responsibilities that must be assumed. Cardinal Matteo Zuppi, President of the Italian Episcopal Conference, recently reiterated the invitation “to be protagonists of the future”, aware of the need to rebuild a fabric of human relations, that not even politics cannot do without” (“We ask the elected officials high responsibility,” Avvenire, September 27, 2022).
The first step in this direction is to be present with a judgment. In a dialogue with monks from the Cascinazza in 1982, Fr. Giussani said, “Why is judgment necessary? A judgment is necessary because judgment points out the road, it leads. But then, there is something that comes before judgement, and this is the love and the will for the road. This is not something trivial, because to the extent to which we do not love the road, the judgement would wither and become something that we do not “give a damn about”, or an expression of self-love, a search for self love. [...] Since without judgement there is no decision or construction, the Evil One has a vested interested in weakening the judgement. Judgment is what judges (condemns) the devil, is what gets rid of the devil: it gets rid of the devil because it is constructive. A judgment on you fights the devil that is in you, because it asks you to change” (L. Giussani, “On Communional Judgment,” Traces, no. 6/2001).
Not only that: in a Christian community like ours, judgment is necessarily a common judgment. Fr. Giussani continues, “'Communal judgment' means 'communional judgment.' What does this indicate? It indicates a judgment which springs forth from the communion we live with each other; the communional judgment expresses a life of communion that is lived. What does a life of communion that is lived mean? A life lived together in order to live the memory of Christ. Because it is in fraternity, in fraternal companionship that Christ’s Presence is most pedagogical, communicates Itself in the pedagogically greatest way, and is assimilated in the way that is most alive and certain.” (L. Giussani, “On Communional Judgment,” op. cit.). It seems evident that belonging to the Christian
community is the fundamental factor for judgment: it is in the place where Christ is present that each of us experiences what really saves the human and is helped to see everything else more clearly including politics, by going beyond our own personal point of view. As the starets says in Soloviev's Antichrist, “What we value most in Christianity is Christ himself–in his person. All comes from him” (V. Soloviev, War, Progress, and the End of History, A. Bakshy trans., University of London Press, 1915, p. 213).

Such a dynamic of judgment frees us from the logic of clashing opinions and helps us focus on the true nature of the unity among us, called by Christ, following the Church, to bear witness in the world. Indeed, our unity, as Catholics, is not defined by the point of arrival–that is, by necessarily finding ourselves agreeing on who to vote for or in identifying the most satisfactory electoral result–but by the point of departure. We are concerned that whoever governs, and whoever is in the majority or in the opposition, may always be confronted with the priorities that we feel are decisive for the common good. And the common good, following the Social Doctrine of the Church, coincides for us with an ideal of society that has as its foundation the recognition of a possible good for each person in the concreteness of his or her life and thus for all humanity, certain of a Presence that makes it possible to look at the other for his or her destiny. From thus we can understand how our interest in politics stems from a passion for the person, and how the circumstances of any elections can become, for those who are committed, an opportunity for encounter.
Bringing this all into context, I believe that there are two factors that already characterize our initiative at this time.
The first is to understand that the concern that underlies any action we make within reality is exclusively an educational concern. This may not sound like much, but it is everything. After the attack on Nassiriya in Iraq in 2003, Fr .Giussani commented, “If there were an education of the people, everyone would be better off” (A. Savorana, The Life of Luigi Giussani, McGill-Queen’s University Press, 2017, p. 1112). Today I wish to emphasize the same thing. We need an education in freedom, an indispensable condition for a true construction of the person and of society. For this reason, before any other issue that perhaps at first glance may appear more urgent for the country, we are concerned about the defense of life, support for families, true equality in schools, work as a sphere of human growth and not only of professional growth. We are certain that education for the common good, understood thus, is what can really determine a more humane society, build a freer Italy and a freer world, and achieve true peace.
This is the point where we recognize ourselves in a common judgment. In this sense, we are interested in a presence whose main characteristic of testimony is the unity among us, and that is willing to risk its own judgment everywhere: in the relationships and places of daily life; by collaborating to find concrete solutions through the different expressions of our social and civil presence (which is why we tend to defend them from excessive state inference); by supporting those who have political and institutional responsibilities and who show that they care about the same ideal as we do, as well as by always seeking fair and constructive dialogues with those who think differently or even oppose it. On the other hand, certain critical reactions to the Italian electoral result on the part of politics, intellectual elites and international chancelleries have highlighted that educational and anthropological issues are still very must the most alive. Indeed, one gets the impression that the most serious threat to a particular image of the rule of law that is considered predominant in the West does not concern economic or military aspects, but rather the conception of human life and the person.

For all the reasons described, the second important factor, at such a dramatic historical moment as the present, consists of an unreserved commitment to peace. The threat that comes from a clash that has now assumed out-of-control proportions, as Pope Francis continues to reiterate unheeded, makes urgent at all levels the total support of the Holy Father’s expressed judgement on the current war, focused on the absolute necessity of initiating a dialogue between the parties in order not to give in to the dangerous spiral fueled by “imperialisms in conflict” (Francis, “Freeing Hearts from Hate,” La Civiltà Cattolica, No. 4135/October 1, 2022, pp. 3-9). Therefore, I invite you to continue to promote prayer initiatives and to raise awareness, starting with the people you are close to, on the importance of an initiative and a common strategy in the direction indicated by the Church so that what now seems to be a mad and unstoppable race of humanity toward the abyss may be stopped as soon as possible.