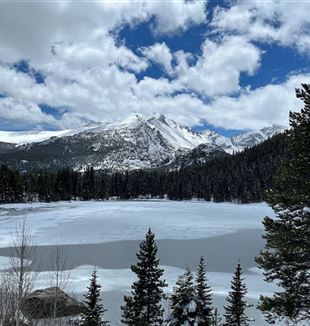 I am a college professor and I participated in the vacation for university students of the movement in North American, in Estes Park, in the Rocky Mountains National Park, an hour and a half from where I live. During that week, news broke of the massacre in Uvalde, Texas. The media storm immediately unleashed: did the police try to intervene or did they act late? Will Republicans decide to discuss gun restrictions? Was the gunman mentally ill?
In those days I also received a message from a friend, a middle school teacher: "A little girl threw up in my classroom because another girl had given her a cannabis-based product to try in the hallway.”

The noise in my head clashed with what my eyes were seeing in those days among the hundred students from the United States, Canada, and Puerto Rico, most between the ages of 18 and 22. They, too, were not spared pain and violence by the world: when they talked about themselves or you asked how the academic year that has just ended was, they spoke of the loneliness they feel being far away from their friends, the fatigue of the last few years of online classes, the fear of the uncertainty of what will happen when they graduate, economic uncertainties and strong competitive pressures, so characteristic of the American context. Many asked what it means to judge life on campus, where freedom of thought is increasingly curtailed, and two of them broke down in tears because they had lost their fathers to Covid. Many of them have psychological problems that, added to all the above, make it very difficult to distinguish between cause and effect.

My eyes see that there is a way of killing youth that does not use weapons but that damages, and it shows. But, more importantly, my eyes also see something else: that these young people sang songs from the tradition of the movement with joy (Mattone su mattone), or written by someone like them (Be still my heart), by both past (Heart of Gold by Neil Young) and contemporary American songwriters (By and By by the Caamp). They participated in the games with such an enthusiasm that you also wanted to join in; they followed me on a hike through the snow, in the sun, silently, without needing to be reminded twice; in response to a wonderful proposal, they spent an afternoon talking about how studying has taught them to discover things in life; in the morning they prayed the psalms; two of them played Bach, Schubert and Brahms and used Fr. Giussani's words to introduce the pieces. When invited to testify to the experience of their communities, they recounted how their desire to be in CLU always stems from wishing to invite others, as it was for the person who wrote to the Premier of Quebec during the lockdown asking for churches, not just supermarkets, to be reopened, or for someone else who affirmed that graduating did not mean stopping to see each other but still meeting for School of Community. It literally becomes clear before my eyes (before any kind of reasoning), that hope in this world is the encounter with this beauty and diversity. Because this is where youth lives.

I returned home, admittedly still interested in how the legislative initiatives on gun ownership will unfold, but above all infinitely grateful and eager to participate in the construction of this little piece of new life that is – just as we just read in the School of Community – like Jesus' tunic for the young children; by clinging to it, we are with the One who has conquered death and can be saved from the massacre of the self.