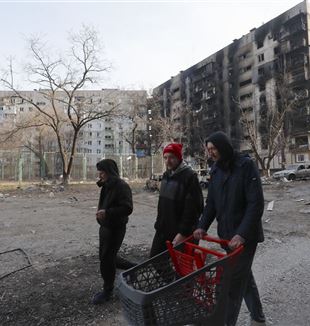 Dear Director, the war in Ukraine has created confusion even among many Catholics, divided between the defence of justice – the evident consideration that there is an aggressor and an assaulted person – and the yearning for peace, an essential goal for life to flourish. Such division only arises when the rational foundations are not clear, which are instead fully realized in the words and gestures of the Pope, beginning with the extraordinary consecration of the Russian and Ukrainian peoples to the Immaculate Heart of Our Lady.
First of all, we must remember that war is never a good thing and that it arises from the darkest aspect of the human heart, which biblical tradition traces back to original sin. War, with its burden of death and horror, which always bring together the aggressor and the assaulted, is foreign to human nature, which is made for peace, for growth, for the affirmation of the other. Fr. Giussani recalled that the extraneousness introduced, represented by the serpent in the biblical story, distorts human desires, incapable of remaining in justice even when they arise as a reaction to a suffered injustice. "It's not hard to be like them," sang singer-songwriter Claudio Chieffo, applying the same teaching to the horrors of Nazism in his song "La nuova Auschwitz [The new Auschwitz] ."

Because of this original weakness, the cry for peace, that "Stop!" uttered by Pope Francis in St. Peter's Square, is not a call for beautiful souls, but a realistic consideration of the human condition. The same consideration underlies the Pope's call about the increase in military spending generated by this crisis. Francis observes that the worldwide increase in instruments of death can only foster the destructive potential that the human has always had within themselves because of that original wound.

Will injustice then be allowed to triumph, international law left defenceless, allowing the oppression of the freedom of individuals and peoples? No, a realistic outlook knows that all people are united by the obscure possibility of evil, but this does not mean that all political choices are equivalent. The Church's social doctrine has always had the value of the person and freedom at its core, understood as the adherence to goodness and the goods of life, which are signs of the great good that is God's plan. For this reason, the Church understands and accepts the right of self-defence against injustice, as long as it does not create a greater evil than that which it is opposing. Therefore, care must be taken to ensure that just defence does not generate a greater evil and an equivalent desire to annihilate the enemy, even with atomic weapons.

It is a balance of judgment and action to which we are all called and which, precisely because of its original fragility, is very difficult to sustain. Here lies the immense and realistic value of the consecration of the Russian and Ukrainian peoples to the Immaculate Heart of Mary. It reminds us that the victims of war are often the innocent and that, just as we are all united in the same original sin, we are also all made brothers and sisters by the redemption that God has accomplished by becoming incarnate in Mary. It is to her, who became the mother of us all under the cross, that we entrust our petition for the miracle of justice and peace, aware that without Christ’s redemptive work, the human desire always tends to become violent, sacrificing the freedom or peace of innocent human beings, and forgiveness becomes impossible. Thus, together with Mary, we can become "artisans of fraternity, we will be able to mend the threads of a world torn apart by war and violence," as the Pope recalled in the Angelus on January 1, 2022. There are already many testimonies of this advancing mercy, such as that of the Ukrainian refugee Kristina who says that "if I am a Christian, I must discover this love within myself, this forgiveness. Because if I hate, I lose this war." Or that of the Russian poet Olga Sedakova who would like to "ask forgiveness from those who are bombed, expelled from their homes and their homeland, those who are slandered and libelled to death. To ask forgiveness for what is impossible to forgive."

Thus, in addition to doing all we can for the widespread reception of refugees who have lost their homes and belongings, we dedicate ourselves with hope to imploring a change of heart in those who can broker peace. After all, the consecration to the heart of Mary, ended by saying, with Dante, "you are the living fountain of hope."