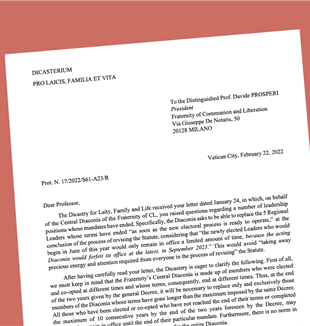 The Central Diaconia of the Fraternity, in its meeting on March 19, 2022, discussed the contents of the letter that Cardinal Farrell sent to me on February 22. The Executive Committee of the Fraternity, having considered the letter at the first meeting after it was received, decided to bring it to the March meeting of the Diaconia.

The Cardinal’s letter further clarifies the scope of the changes introduced by the Church. In the process of us formulating specific questions and the Dicastery responding each time with precise answers, we have been helped to fully understand the full picture, including the juridical aspects, and therefore to understand what is being asked of us.

It is very important to me that all of you know what has taken place. I would like to go back and outline with the utmost transparency the events that have taken place since the publication of the General Decree regarding International Associations of the Faithful and the resignation of Fr. Carrón. In past communications, I have, in fact, said some things that turned out to be partly inaccurate because I myself, along with all the members of the Diaconia, had interpreted our mandates to be only for a short term. Please forgive me for having to return to considerations of a “juridical” nature, but I would first like to pass on to you some interpretative notes, indicated to me by our expert canonists, regarding the three communications we received from Cardinal Farrell after Carrón’s resignation [...]