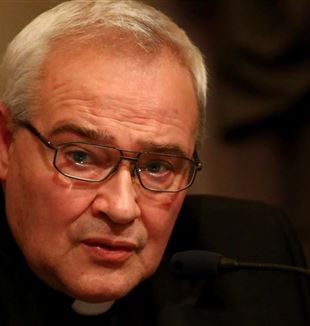 With great pain and at the same time an immediate sentiment of gratitude and appreciation, I learned a short time ago that our dear Fr. Luigi Negri has gone to heaven. Another important brick in our history has not left us, but continues mysteriously to build it as he did passionately all the years of his life.
Ever since he was “bowled over as a young man” by the encounter with Fr. Giussani, his religion teacher at the Berchet High School in Milan, he dedicated himself untiringly to building the Movement of CL with intelligence and affection. Initially, his preference was exercised in the education of generations of young people, whom he continued to follow faithfully, day after day, in their lives as adults, in this way contributing with dedication to the growth of our companionship throughout Italy as a close collaborator of Fr. Giussani. In this dedication he always obeyed, embodying in his life the words he often used to define one of the characteristics of the humanity of his teacher: “Humility is the virtue of obedience.”
Among his many qualities, we remember his passion for mission that he never missed an opportunity to encourage in the Christian people, and his cultural fervor, translated into an intelligent reading of modernity in the light of the Christian event. He was a passionate defender of faith that becomes culture, according a definition by Saint John Paul II that he found particularly congenial: “A faith that does not become culture is a faith not fully embraced, not entirely thought through, not faithfully lived” (Discorso ai partecipanti al Congresso Nazionale del Movimento ecclesiale di impegno culturale: «Insegnamenti», V, 1 [1982] 131 [Words to the participants of the National Congress of the Ecclesial Movement of Cultural Engagement: ‘Teachings’]).
In the years of his ecclesial maturity, responding to the Pope’s call, he poured himself out as a faithful and ardent servant of the Church, first as Bishop in the diocese of San Marino-Montefeltro, and later in the Ferrara diocese, maintaining a clear reference to his own origin in welcoming all those he encountered.
I am certain that his teachings and his vigorous temperament that accompanied us so much all these years will continue to be a factor in building up the Church and our history in the memory of his friendship.