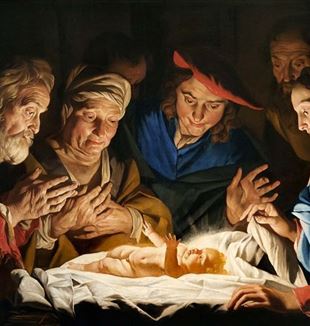 This year too we have been reached by the announcement of Christmas, which is always the same and yet always new, just as the circumstances that life gives us are new. This year, in particular, the King of heaven has come among us at a moment in which it is difficult to not feel the “winter’s icy sting,” to use the words of the song, From starry skies descending. Not only because of Covid, which unfortunately is striking with renewed aggressiveness. This difficulty is also due to the changes that our Movement has had to face in recent times, changes that for some of us continue to be a source of confusion and fear.
However, to this confusion, to our need for direction, God has responded and continues to respond in a simple way:

“And this will be a sign for you: you will find a babe wrapped in swaddling clothes and lying in a manger.”

God’s response to our need for light, for comfort, for salvation, is different from that which, instinctively, we would have expected. As Pope Francis said in his Christmas speech to the Roman Curia, “the mystery of Christmas is the mystery of God who enters the world by the path of humility (...) and the King of kings enters the world not by attracting attention, but by causing a mysterious pull in the hearts of those who feel the thrilling presence of something completely new, something on the verge of changing history.”

Meditating upon the words of the Pope, I was not able to avoid asking myself the question: what is so “thrilling”, so “new”, about a baby placed in a manger? Or, more precisely: is there something new for us to discover, as we turn our gaze today on this baby? What does this Christmas have to say to us?

Two answers arise in my heart.
The first. It is true that God chooses a path that, instinctively, none of us would have chosen: the way of humility. But why does He choose it? I will venture a response: He chooses it because it is this path that corresponds to the expectation of our heart. In fact, this is true, at least for myself and for many friends: nothing has the power to warm our heart as much as becoming aware that this God has chosen to implicate Himself with our littleness, making it the dwelling place of His power, of His greatness.
And it is right. Deep down, it is reasonable that it should be this way because it is only in this way that God gives us the Savior that we truly await: not a solitary Iron Man who uses the world as a theater in which he can show how great he is by saving it, but the Emmanuel, God with us, the God who, since He truly loves us, wants to make us, poor and fragile and vulnerable as we are, instruments of His presence in the world.

This is, therefore, my first wish for all of you on this Holy Christmas: that the God child, the God who chooses to clothe Himself in our weakness, light within us the fire of audacity. May the impetus of this new beginning be defined by the humble certainty that the Lord is with us. Emmanuel: God is with us.

I come, then, to the second response, that, instead, was suggested to me while meditating on a few Christmas homilies by Pope Emeritus Benedict XVI. Multiple times, Ratzinger returns, as if enchanted, to contemplate the paradox of this God who, in becoming a baby, takes on the garments of a “beggar,” of the God who, without needing anything, shows that He thirsts for the love of His creature, just like a baby searches for the embrace of his mother:
“God became a baby, a baby who needs a mother. He became a baby, a creature who enters into the world crying, whose first sound is a cry for help, whose first act is to stretch out his hands in search of security.” And again: “God became a baby. However, we also hear it said that these things are nothing but sentimentalism, that it would be better to leave them behind. But the New Testament has other ideas on the matter. For the faith of the Bible and of the Church, it is important that God should have wanted to be a similar creature, dependent on a mother, dependent on the beneficent love of man.”

Dear friends, these words of the pope emeritus truly shed new light for me on the moment that we are passing through. Not only does God walk with us, but, with an act of even more vertiginous generosity, He entrusts Himself to our freedom, He begs for the help of each one of us, He hungers and thirsts for our freely spoken “yes.” Never before has it been as necessary that the “bet” that God makes on each one of us become habitual content of our self-awareness. Never before has it been as necessary that we should foster the growth in ourselves of the awareness of the fact that, as we repeated to one another in the past year and as Julián wrote to us in his letter of resignation as President of the Fraternity, the increase or decrease of the charism that has seized our lives is truly entrusted to the freedom of each one of us.

No one, however, should feel crushed by the weight of “so much” responsibility. Rather, let us help each other to look at this responsibility as an exhilarating gift. In the end, what one may begin to intuit by looking at the baby Jesus as he seeks the embrace of His mother is precisely this: perhaps the Mystery could not do without us? As I see it, the response is clear: He certainly could have done without us. No one is indispensable. But this only makes all the more moving the fact that He reaches out towards me, towards each one of us. Let’s help each other, in the time to come, to respond to this election with generosity, giving everything, without reserve, “so that the human glory of Christ can continue to manifest itself in the world,” even through this small but great companionship of ours.

A warm embrace to all of you.