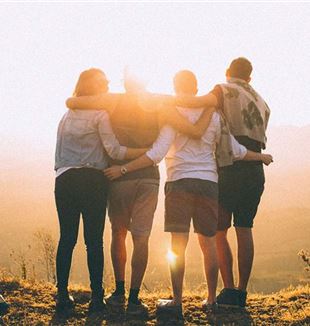 After the embraces and greetings of those who had not seen each other for more than a year, the hundred or so young people from different cities in the Veneto region, who had come to Padua for the GS Beginning Day, slowly took their seats in the hall. There was an atmosphere of homecoming, of friends seeing each other again after a long, painful adventure. The screen in the hall was already on, the chatter gradually faded and made way for Schubert's Incompiuta. I too, a little awkwardly, settled into my chair at the back of the hall and watched the young people sitting in the rows in front of me. The silence and the notes of Schubert gave way to anticipation. The music faded, a teacher asked the young people to stand up and recite the Angelus. The meeting began. The title of the day appeared on the screen: "An incessant desire for the impossible".

The words of the leader resounded. The young people were prompted to ask themselves why it is worth them being there, and why they should have spent that rare sunny October day together. The room was then filled with the voices and images of some testimonies, excerpts from television series and the verses of a Spanish poet. Beautiful. I listened and watched.

Almost as if by surprise, a thought burst into my mind and an unexpected emotion rose within me. I went back in my memory to 48 years ago, and I saw myself, a 14 year-old boy, entering the ramshackle GS headquarters at that time, unaware of what would happen. I sat, as I did today, at the back. I even remember the colour of the plastic chair and the awkwardness I felt at the sound of those monotone voices around me; for them, however, it seemed normal.

I looked at the young people sitting in front of me. Then, as like now, in a room full of faces and random stories, Someone happened to be present, approaches, and seizes life. This Someone does not seize just a part of life – a certain passion, a religious, voluntary, social commitment – no, They seize the heart, life. And everything that comes with it: your wife, children, work, battles, failures, the miracles. Everything. And It never leaves you, like hope that illuminates your days, a light that is sometimes faint, far away, but is at other times brighter, like today. Like someone who takes you by the hand and begins an unimaginable companionship. "Bestial as always before, selfish and purblind as ever before.”

The young people sitting next to me do not have notebooks in their hands, or old disused diaries, as they used to. They move their fingers quickly over their iPhone keyboard to take notes. But you can tell it is the same thing. The time that has passed since I first met them is like a lens that lets you glimpse your destiny and clarifies what is happening to these young people now.

What I entered back then, what these young people are now starting to tread, is a place where those who enter find their lives changed. A strange place, like the earth around the burning bush that never stops burning. This is a strange and dramatic land because of what can happen. You could even say dangerous, but only for what might not happen. This is a sacred place. I saw it clearly today. For some, or for many of these young people, what might happen is that this encounter will begin to shape time, their work, everything they will meet and touch. The whole of life. The destiny of life.

Just as it happened to me in the banal circumstances back then, the same can happen to the young people who stood in that room today, in this companionship, a life-changing encounter. Not a piece of life. The whole of life. I am reminded of Charles Taylor's observation quoted by Julián Carrón on CL's Beginning Day: "Suddenly, in the 1960s, there was a rebellion and many people left." I too witnessed the impact of that rebellion on my generation; those were the years when I met GS. I too, raised in a Catholic family, wonder how I escaped the tsunami that hit most of the men and women, young and old, of my country. Taylor's question resonates with me: "How did I avoid ending up like most of the inhabitants of Quebec?” Suddenly, the notes of Claudio Chieffo's Canzone degli occhi e del cuore resounded.

The voice of the young people gained strength. "Because you can tell from the eyes when life begins again". Within this encounter, life begins again.
What weight the years give to these words! These young people too, if they are faithful, if they love to the point of being faithful, will see life begin again. When it seems as if there is no more hope, it will begin again. After the pain, the failures and everything that can happen.

Read also - "You are not lacking in any spiritual gift"

Among the young people, every distraction has become strange, out of place. Only the echo of that voice resounds. "This living Mystery, who gives substance to my ‘I’, has become a man who said..." I looked at the faces of these young people that I did not know and yet felt so close to them, like brothers.