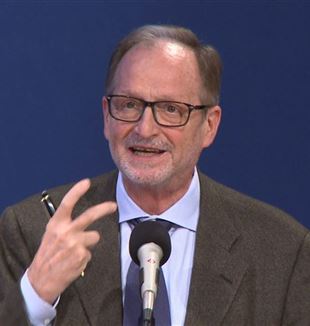 “Do not let your hearts be troubled,” Jesus told His disciples and repeats to each of us today. But howncould the disciples not have been troubled, thinking of what was about to happen? What reason did Jesus give them? What reason does Jesus give us now? “You have faith in God; have faith also in Me. In my Father’s house there are many dwelling places. If there were not, would I have told you that I am going to prepare a place for you?”

Jesus did not demonstrate anything. He simply offered His friends the one adequate reason: trust in His word. “Have faith in Me.” But what reason did they have for trusting? What reason did I have for trusting as I read these words in front of our friend Pier who was breathing his last? What reasons do we all have for trusting now, in front of his casket? Only those derived from a story, the one the disciples had lived with Jesus. They had nothing else. Those words were not spoken by just anybody, some stranger prattling thoughtlessly. These words were spoken by someone they knew well, someone they had seen on many occasions break through their way of measuring things and overturn their thoughts, leaving them speechless in front the exceptional nature of His presence. This is all they had for trusting in Him: facts, a life lived with Him, a shared life that day after day, for weeks, months and years had filled their eyes with the exceptional nature that overflowed in His every gesture. This alone was the foothold Jesus had offered them for trusting. Therefore, He did not have to demonstrate anything to induce them to trust in His word, because they had already seen everything. What could Jesus have added to what they had already seen, to convince them? What, if He had not already convinced them through years spent living with them? Nothing He could have done in addition would have sufficed to move even an iota of their rationalism. In fact, He spoke to them peacefully, saying “You have faith in God; have faith also in Me,” and He promised them, “If I go and prepare a place for you, I will come back again and take You to Myself, so that where I am you also may be. Where I am going you know the way.” At that point, Thomas asked him (but it can be our question now, as well), “Master, we do not know where You are going; how can we know the way?” It is striking that after all that shared life with the disciples, up to the end of His life, exactly in the culminating moment, it was still not clear to them and they had not grown in the persuasion that they already knew the way because it was in front of them. They had seen Him; they had seen how all His gestures and the shared living with Him had generated a life they could not have given themselves without His presence, without the familiarity with Him. This is why Jesus told them, “I am the way, the truth and the life,” and, to leave no doubt, “No one comes to the Father except through Me.”
This recognition is what made Pier “Pier”!

There is nothing to add. The friend we knew, the man we saw engage in reality, the man we admired for the way he faced things, all this was nothing more than the fruit of his recognition of having found “the way.” So, there is no need to add anything to what we saw him live in front of us. Above all in the moments when many people lost their heads, he remained attached to the one thing of which he was truly convinced, that Christ alone was the answer to “the very human cry of Leopardi, that is, of the human person,” as he said in one of his testimonies (“L’inizio come origine permanente [The beginning as the permanent origin],” Tracce, n. 8/2014, p. 95). It was not a sentimental reaction; it was a judgement that marked Pier’s life and generated in him the self-awareness that there is no other life, there cannot be another human life that can truly overflow with peace and harmony, to the point of leaving one speechless, other than Christ.

He later told us that when many left during 1968, only one thing enabled him to remain: affection. In the end, life is this affection, as Saint Thomas Aquinas told us. “Man’s life consists in the affection which sustains him most, for there he finds his greatest satisfaction,” the greatest correspondence (Summa Theologiae, IIa, IIae, q. 179, a.1 co). There is nothing else. These are not mere words, because in front of the challenges of living, it becomes clear whether this is true or not. It is not true simply because we repeat it, but because we discover that when everything gets confused or when everything gets complicated, when you lose your orientation, there are those who do not lose it. For this reason, Pier was and will remain crucial for our story, as Cardinal Scola said in his message. He will remain there, in front of our eyes, in front of our memory, in front of our gaze, and when we, too, are challenged by circumstances, we will be able to recognize the one reason that can sustain our life, as it sustained Pier’s, to the point of making him a witness for everyone. Why? Because only Christ can seize our person so wholly as to generate an affection that nothing can shake, nothing.

For this reason, as he told us on many occasions, his whole life was nothing other than saying yes, saying “yes” to Christ, to He who had seized him in the past and seized him in the present. The “yes” here and now, in the moment in which he was living or speaking, because if it were not here and now, it would not have been true even in the beginning; it would not have existed. For this reason, we can say that what generated our friend to the point of making him shine before our eyes was his faithfulness to the vocation in which he saw his entire person and his entire life fulfilled. We are witnesses to this; it is not necessary to say many words. All of us are witnesses to what we saw before our eyes, the fruit of an itinerary, a work that brought him to what we heard Saint Paul say, that is, a certainty that emerged anew in front of our eyes during his illness. “For I am convinced that neither death, nor life, nor angels, nor principalities, nor present things, nor future things, nor powers, nor height, nor depth, nor any other creature will be able to separate us from the love of God in Christ Jesus our Lord.”

Read also - Bertazzi: "The beginning is something that is alive now"

This persuasion that has grown over time, that we have seen grow in shared living with him, is what he leaves us in inheritance as the verification of his journey, as the verification of the vocation, of the point the journey of vocation can reach: the point of generating a person so affectively full, so affectively fulfilled, that Pier documented it in everything, in his way of working, of being, of living and relating with everything. For this reason, we like him can say with Saint Paul, “If God is for us, who can be against us? He who did not spare His own Son […] how will He not also give us everything else along with Him?” Therefore, “we conquer overwhelmingly through Him who loved us.”

Today let us ask Our Lady that we may cherish and learn from Pier’s testimony so that no matter what circumstances we may have to face, there will win in us as it did in him the one affection, the affection for Christ, that can make us remain ourselves.