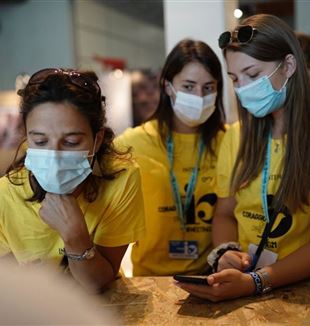 From the Vatican, July 29, 2021
To His Excellency the Most Reverend
Bishop Francesco Lambiasi of Rimini

The Holy Father is delighted that the Meeting for Friendship Among Peoples is taking place once again “in person,” and he extends to you, to the organizers and to all the participants his greetings and well-wishes for a fruitful event.

The title selected–“The courage to say ‘I’”–taken from the Diary of Danish philosopher Søren Kierkegaard, is more important than ever in this time when the world is seeking to start off again on the right foot, so as not to waste the opportunity provided by the crisis of the pandemic. “Starting again” is the key here, but it does not happen automatically, because freedom is at play in every human initiative. Benedict XVI reminded us of this saying, “Freedom presupposes that in fundamental decisions, every person […] is a new beginning. […] Freedom must constantly be won over for the cause of good” (Spe Salvi, 24). In this sense, the courage to risk is, above all, an act of freedom.

During the first lockdown, Pope Francis reminded us all how we must exercise this freedom saying, “Even worse than this crisis is the tragedy of squandering it” (Homily for Pentecost, May 31, 2020).
Despite imposing physical distancing, the pandemic has placed the person, the “I” of each person, back at the center, in many cases provoking a reawakening of fundamental questions about the meaning of existence and the utility of living that had been dormant or, worse still, censored for too long. It has also reawakened a sense of personal responsibility. Many people have borne witness to this in different circumstances. Faced with sickness and pain, faced with the emergence of a need, many people unflinchingly said: “Here I am.”

Society is in dire need of people who can be a responsible presence. Without the person, there is no society, merely a casual aggregation of beings who do not know why they are together. The only glue remaining would be a calculating selfishness and self-interest that makes us indifferent to everything and to everyone. Incidentally, the idolatries of money and power prefer to deal with individuals rather than persons, meaning with an “I” focused on his or her own needs and subjective rights rather than an “I” that is open to others and striving to form the “we” of fraternity and friendship in society.

The Holy Father never tires of warning those with public responsibilities about the temptation to use a person and throw him away when they are no longer useful, rather than being at the service of the person. After all we have experienced in this period, perhaps what is most evident to us all is that the person is the foundation upon which we can begin again. Certainly, we also need to find the resources and means to set society in motion again, but, above all, what is needed is someone who has the courage to say “I” with responsibility and not with selfishness, communicating with his or her own life that one’s day can begin with a reliable hope.

Courage, however, is not always a spontaneous gift and no one can give it to himself (as Manzoni’s Fr. Abbondio said), especially in a time like ours in which fear–the tell-tale sign of a deep existential insecurity–plays such a defining role that it blocks a great deal of energy and impetus towards the future, which is increasingly perceived as something uncertain, especially by young people.

In this regard, Servant of God Luigi Giussani warned of a two-fold danger: “The first danger is doubtfulness. […] Kierkegaard noted, ‘Aristotle says that philosophy begins with wonder, and not as in our times with doubt.’ Systematic doubt is like the symbol of our times. […] The second objection to the decision of the I is meanness, cowardice. […] Doubtfulness and convenience are the enemies of the I.” (The One for Whom Life Is Lived. CL Archive. No. 1 Summer Vacation, 1992. Occasional supplement to Communion & Liberation Magazine, 9-10).

What, then, can give us the courage to say “I?” It comes by virtue of that phenomenon we call encounter: “Only within the phenomenon of the encounter is the I given the possibility to decide, to make itself able to recognize and accept. The courage to say “I” is born in the face of truth, and truth is a presence” (ibid., 10). From the day He became flesh and came to live among us, God offered man the possibility to escape from fear and find energy in the good, following His son who died and is risen. St. Thomas Aquinas’s words are illuminating when he affirms, “Man’s life consists in the affection that chiefly sustains him and in which he finds the greatest satisfaction” (cf. Summa Theologiae, II-IIae, q. 179, art. 1. 150).

The filial relationship with the eternal Father, which is made present in persons reached and changed by Christ, gives consistency to the self, freeing it from fear and opening it to the world with a positive attitude. It generates a desire for goodness: “Every authentic experience of truth and goodness seeks by its very nature to grow within us, and any person who has experienced a profound liberation becomes more sensitive to the needs of others. As it expands, goodness takes root and develops” (Francis, Apostolic Exhortation Evangelii Gaudium, 9).

This is the experience that gives us the courage to hope: “Encountering Christ, letting themselves be caught up in and guided by his love, enlarges the horizons of existence, gives it a firm hope which will not disappoint. Faith is no refuge for the fainthearted, but something which enhances our lives. It makes us aware of a magnificent calling, the vocation of love. It assures us that this love is trustworthy and worth embracing, for it is based on God’s faithfulness which is stronger than our every weakness” (Francis., Enc. Lumen Fidei, 53).

Let us consider the figure of St. Peter: the Acts of the Apostles report these words he spoke after having been strictly forbidden to continue speaking in the name of Jesus: “Whether it is right in the sight of God for us to obey you rather than God, you be the judges. It is impossible for us not to speak about what we have seen and heard” (4:19-20). Where does “this coward who denied the Lord” find his courage? “What happened in this man’s heart? The gift of the Holy Spirit” (Francis, Homily During the Mass at Casa Santa Marta, April 18, 2020).

The profound reason for the courage of the Christian is Christ. It is the Risen Lord who is our security, who makes us experience profound peace even in the midst of life’s storms. The Holy Father hopes that during the week of the Meeting, the organizers and guests might offer a living witness, taking on the task indicated in the programmatic document of his pontificate: “Many […] are quietly seeking God, led by a yearning to see his face, even in countries of ancient Christian tradition. […] Christians have the duty to proclaim the Gospel without excluding anyone. Instead of seeming to impose new obligations, they should appear as people who wish to share their joy, who point to a horizon of beauty and who invite others to a delicious banquet” (Apostolic Exhortation Evangelii Gaudium, 14).

The joy of the Gospel instills in us the audacity to set out on new paths: “We must be bold enough to discover new signs and new symbols, new flesh […] particularly attractive for others” (ibid., 167). This is the contribution the Holy Father hopes the Meeting can offer as we start again, with the awareness that, “the security of faith sets us on a journey; it enables witness and dialogue with all” (Enc. Lumen Fidei, 34), with no exceptions, because the horizon of faith in Christ is the entire world.”

In entrusting this message to you, Your Excellency, Pope Francis asks you to remember him in prayer and gives his heartfelt blessing to you and to the organizers, volunteers and participants of the 2021 Meeting.
I, too, express my best wishes for the success of the event and I take advantage of the occasion to assure you of my deepest respects.

Yours Devotedly in the Lord,