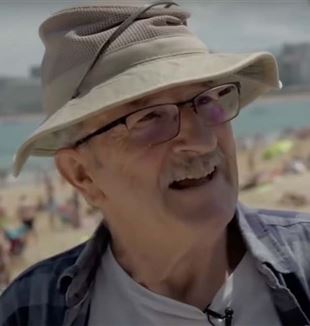 The Book of Sirach says that "it is by his end that a person becomes known for what he is" (Sir 11:28). To understand the value of Mikel's life, we must take into account his entire journey: from his childhood, which many of you here today shared with him, to his later years, which also granted him many friendships. We can now look at his entire life, taking into account his end, in such a way that his last years illuminate his previous life. We cannot cover all the facets of such an intense story: his social, cultural, political, academic commitment..., and the picture of his life can only really be re-composed by assembling all the perspectives and points of view that everyone had of Mikel, like combining the stones of a mosaic. No human being can fully explain the life of another human being. In fact, only God the Father, who is the Lord of history, can see all factors together and give ultimate meaning to each person's life. This, too, gives us peace.

Mikel had a long history of defending his ideals of justice, freedom, truth and good. He committed himself to them, risked himself for them, and often paid a heavy price for the choices he made, with his successes and his mistakes, his adjustments and changes. He has written much, brilliantly, about his land and its history, about his own biography; I point you to his books for a better understanding of what he worked and suffered for.

For the children of my generation, Mount Igueldo was synonymous with attractions and fun. In recent years, his home in Igueldo has become for many of us a place of hope, life and friendship. For what reason? Surely we have to return to a decisive event that happened 7-8 years ago, when, being very ill, he was about to throw in the towel and voluntarily abandon himself to death; however, he understood that there was something better than letting go, that there was still good to be done for the people closest to him and for others, and to reconcile with everyone. He did his part – as did the medical team, to whom he was always very grateful – to stay alive, because life was the condition for doing good. It was from that decision, and from his choice of life and good, that many of us encountered or re-encountered him.

The readings we have just heard in the liturgy are those proper to today's feast, which commemorates a great European thinker, Carmelite nun and martyr, Edith Stein; they were chosen by his wife Irene. The Gospel concludes with this invitation, "Watch therefore, for you know neither the day nor the hour," and the parable of the virgins exhorts us to be prepared in life, to keep the lamp burning and to have enough oil in our vessel. Those whose lamp is lit and who have a sufficient supply of oil can wait for the bridegroom. We can understand that the lit lamp is faith, the flame of faith, openness to God with a simple heart, as Mikel had. So what does it mean to be ready, to have oil ready for the lamp? The most common thing – perhaps because we have been taught it – is to think that being prepared means to be blameless, never making mistakes, as if God is there waiting to "catch" us in the act. We would always live in fear. But Jesus does not want to instil fear in us. Rather, I believe that being prepared in life, looking forward to the final Destiny, is an attitude of those who live on a path of continuous learning, of continuous readiness to learn every day and to change, or, using a great Christian expression, to continue to be converted.

If we look at Mikel's life – as I knew it – we find more than one indication that he lived these years with his lamp lit and with a good supply of oil. I will point out a few:

He was a man who, at nearly eighty, conveyed a sense of having more life towards the future than towards the past. Not because he had not written extensively about his past and that of his country, recent and ancient. Moreover, in his books and essays he recounts the terrible experiences he had to go through that would have poisoned anyone's heart. However, he did not live looking backwards, but to the present and the future, indeed, to eternal life. No resentment, no bitterness, no nostalgia. He was not wounded by resentment. He was hurt only by the beauty, the good, the friendships that were given to him. One day he said to me, "I wonder why it took me so long to find this life that I wanted to lead from a young age. But I will tell you what: I do not care, because I am so happy now...". He was a happy man, sharing the joy of life with others.

He was a reconciled man, who knew that he had been forgiven for the wrong he had done (and had acknowledged), and therefore wanted to forgive. A few days ago, commenting on the presentation of a book in which he had participated along with other important figures, he said me over the phone, "When presenting that book with all those people who have done so much for Christianity, I asked myself: what am I doing among them? And I realized that I was among them as the one who has been forgiven. That was my contribution."

He was also a man in whom admiration and surprise prevailed for what he encountered and those he met. He recalled how he was struck when he looked at a phrase hanging on a school wall, "It amazes me that you can say to children, 'You are a gift.' How wonderful!" All of us are that child; he recognized himself as such and helped the rest of us understand that we are that gift. Only thus can we move beyond the reduced measure which we so often confine ourselves to. Many of his students remember what a great teacher Mikel was and how he helped them in a decisive way in their lives.

He was undoubtedly a restless man, and I suppose not often easy. But he definitely always had the desire to learn and grow; he was intellectually gifted and revealed great openness towards the search for truth that honored his constant exercise of reason. It was not uncommon to hear him say, "I wonder why, I look for explanations that are true." When faced with the things he saw, he did not succumb to prejudice. He sought the difference between touching the ground of knowledge of reality and being enveloped by the shadows of the falsity of an ideological approach.

Read also - Carrón's message for the death of Azurmendi

But above all, he was a man capable of embracing. He embraced us so much... and so many of us... that he became the father of a very large family. It is no coincidence that his recent book is called The Embrace. And so he urged us to embrace, to communicate our experience of life, to personally accept the truth of the encounter we have made and to propose it to the people we meet. Whoever embraces the strongest wins.

Mikel experienced many exiles of different kinds and for different reasons. In these years, thanks be to God, he was able to return to his land, to his home, and above all he was able to return to the Church as a living and concrete companionship, through the movement of Communion and Liberation. The encounter of faith opened him to a particular story that anticipates a fullness now and forever. Curiously, in returning to the Church, he transmitted the joy of belonging to it to those of us who were already in the Church. He hoped for eternal life, thanks to his faith in Jesus Christ that he had rediscovered. At the end of his precious interview with journalist Fernando de Haro he says: "We know there is a resurrection. He rose and He told us that we will rise again from the dead." We cannot but welcome these statements of his.

In light of these indications, it is very reasonable to conclude that Mikel was a man who lived with the lamp of faith lit and who had plenty of oil reserved in his vessel, who watched and prayed; therefore, the day and the hour did not surprise him. He did not know when it would happen, but he was prepared.

We entrusted his life to the Virgin of Aránzazu, to whom we planned to go on pilgrimage when he recovered from his operation. We pray especially for Irene, for Nahiko and for his whole family. May the Lord also grant us to live prepared, with our lamp lit and with a supply of oil, to continue to learn from the circumstances, and may He grant us to continue to do so together.

I would like to convey to all present the greeting sent to me by Bishop José Ignacio Munilla of San Sebastián. He joins this liturgical celebration in prayer and thanksgiving for the life of Mikel Azurmendi.