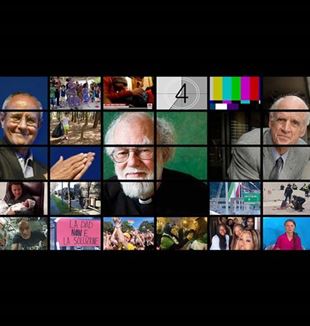 More than 40 years of exhibitions and every year at least one captivates our heart; a phrase, an image, or a guide’s comment, ignites a lasting interest. This year, again, the pavilions of the Rimini expo will not be as crowded; but we will still be able to enjoy everything the Meeting has to offer even from miles away. We will be able to visit the exhibitions both online and in person, by booking through the Rimini Meeting App. These are the exhibitions that will help us explore this year's theme in various ways: "The courage to say I".

The secularized age in which we live, characterized in many spheres by a sense of uncertainty, presents itself as an opportunity to rediscover the true nature of the person; the thirst for truth, justice, goodness and beauty. It is precisely in moments like these that the irreducibility of the human emerges. Entitled Living without fear in the age of uncertainty, this exhibition will immerse us into present reality through songs, interviews, film clips, poems, artworks and images and, at the heart of the exhibition, testimonies by Julián Carrón, Rowan Williams, former Archbishop of Canterbury, and Charles Taylor, Professor Emeritus of Philosophy at McGill University in Montreal. 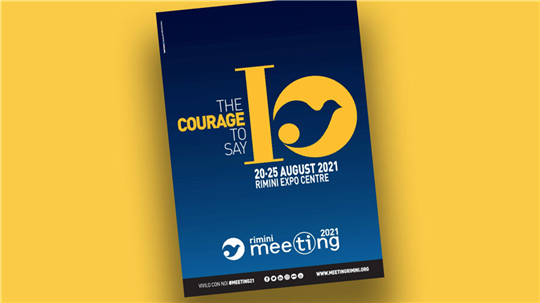 "Why are we so fascinated by this world? What do we see in it? Why do we want to know a story ‘ends’?" We are talking about TV series, a world we are all (or nearly all) immersed in, especially since the beginning of the pandemic. The Meeting's exhibition A Burning Question explores this recent and powerful phenomenon, in which "thanks to specific stories, questions emerge that affect us all." Through the eyes of Rust from True Detective, the scientists from Chernobyl or Rue and Jules from Euphoria (to name just a few), we will be able to investigate something about ourselves. "We will accompany you through this world, to better understand the experience of those who work to produce that universe that is so complex and rich, and which fascinates us so much,” says Davide Perillo, one of the exhibition curators. And if visitors are interested in learning more about the “behind the scenes”, they can do so in the “conversation space”.

The author of The Hobbit and The Lord of the Rings will also feature at the 2021 Meeting with The Tree of Tales: Tolkien and the polyphony of creation. Few authors like J.R.R. Tolkien have been able to create characters whose individual stories actively collaborate in the "polyphony of creation" (as the exhibition's subtitle states). "To exalt the ‘I’ does not mean to oppose it to the ‘us’, but means exactly the opposite. It means to make the ‘I’ play and sing alongside others within a polyphony, within a musical chorus,” explains Giuseppe Pezzini, the exhibition curator. The exhibition is divided into three sections: the first is dedicated to Tolkien's life; the second to his thought on man's creativity in relation to God's; and the last section is dedicated to The Lord of the Rings, to be viewed in light of the first two sections. "It will be a digital and immersive experience," says Pezzini. "It will be very different from anything you have seen before. Therefore, it requires an open heart and open eyes.”

Six large video projections will present individual chapters from the life of Pier Paolo Pasolini in the exhibition Me, Pier Paolo Pasolini, curated by Casa Testori. "Pasolini is still such a living word that burns even almost 50 years later; because, by destiny, he had taken on a collective wound,” explains Giuseppe Frangi. "His strength therefore lies in this link between the personal and public. Pasolini is the Italian intellectual who, like no one else, placed himself at the center of his historical-poetic and literary profession. His every word is an attempt to respond to the restlessness that pervaded him." In the videos, Pasolini’s own voice will speak to the visitors and will tell them about his being an intellectual without a country.

From one of the bloodiest ethnic wars in Africa (the war in Uganda during the 1980s) to Hurricane Katrina, which brought the Gulf Coast of the United States to its knees in 2005. And in between: a woman, a priest from Brianza, one of the biggest slums in the world – in Kireka, in Kampala – , and two schools. Readers of Traces already know Rose Busingye and "her women" of Meeting Point International, but the exhibition You are worth, will unveil and explore, through photos, videos and audios, the incredible story that over the course of 30 years has given back dignity to those who thought that they were worth nothing; it has given them a taste of a new freedom.

Its meaning is "rupture" and indicates sudden changes that lead to new and different ways of acting, thinking and interpreting the world around us. The exhibition Disruptive. The challenge of rebuilding wishes to explore this concept further, in response to President Mattarella's invitation in his end-of-year speech: "This is builders’ time". The exhibition is the fruit of two years of work (with a pandemic in the middle) of twenty university students, interested in looking for and looking at “builders” today, particularly fascinated by the figure of Sergio Marchionne. Through unpublished interviews with important figures, they question the managerial-entrepreneurial method: can it really respond to the challenge of the rebuilding of our country?

There will also be two other exhibitions on work. Future Creators presents the experiences of organizations that deal with the work and social inclusion of vulnerable people, particularly during these times of pandemic: disabled people, prisoners, young NEETs, and migrants. The exhibition It’s never too late also focuses on training and education, and how to reconnect school, university and the world of work.

The exhibition 120 minus 50 equals 70 is dedicated to Gino Cervi, whose 120th anniversary of birth is celebrated this year, and Fernandel, who died in 1971. The two anniversaries, subtracting the second from the first, give a third anniversary: seventy years since filming for the first film in the series based on Giovannino Guareschi’s The Little World of Don Camillo began.

The exhibition Human Nature? To what an image, to what a dark resemblance, curated by Davide Rondoni and that will be inaugurated on August 18, maps out an artistic journey of sculptures of the human figure, through the work of already well-known contemporary artists, and those at the beginning of their career. Beginning with Ilario Fioravanti, a master of twentieth-century sculpture, the exhibition will start from outside the Rimini expo and will lead to the city’s Palazzo di Arte Contemporanea.#Meeting2021