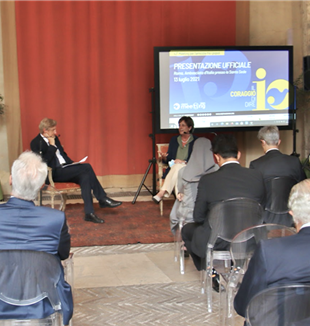 "The main thing is 'to be’, then we understand what to do," said the host, Ambassador Pietro Sebastiani, at the beginning of the presentation of the program of the Meeting 2021 (Rimini, August 20-25), whose theme centres around a phrase by Kierkegaard that is as simple as it is full of consequences if taken seriously: "The courage to say I." Never has it been so topical, in a world shaped by social networks and by a constant swing between the exaltation of the ‘I’ and alienation.

Laudato si', the educational pact, Caritas in veritate are much more than recommendations of "good practices in a time like ours, marked by dramatic challenges,” Sebastiani added in the hall of Palazzo Borromeo in Rome, the headquarters of the Italian Embassy to the Holy See. The more impermeable circumstances become, all the more necessary is our openness to dialogue and our willingness to be surprised by what happens, continued Bernhard Scholz, president of the Meeting for Friendship Among Peoples Foundation, introducing the other speakers: Sister Alessandra Smerilli, Under-secretary of the Dicastery for promoting Integral Human Development, Marco Sesana, Country Manager and CEO of Generali Italia and Global Business Lines, and Maria Cristina Messa, Minister of University and Research.

The topic of the care for creation must not make us forget another important aspect, such as our duty to cultivate what has been entrusted to us, said Sister Alessandra said in her speech, emphasizing the need for a change in global outlook so that there are no separate sectors: business on the one hand and sustainability on the other. Rather, everything is linked. And it is not always true, as Kate Raworth writes in her essay Doughnut Economics, that an upward curve or an upward parabola always indicates “good” in a diagram. Sometimes true success means balance. This mindset has very concrete implications for the economy as it affects decisions taken by companies.

Our sense of security, in some cases, has increased during the pandemic, instead of decreasing. Marco Sesana began with a paradox, or rather, with an anti-instinctive consideration. After a storm, we can see more clearly what remains and what decays. There is much talk about artificial intelligence (Fr. Paolo Benanti, one of the greatest experts on the subject, was among the audience at Palazzo Borromeo), but what we need now, continued Sesana, is a lot of natural intelligence, because the most refined software is inside our heads. And, above all, it is the only thing capable of producing real and lasting change. Among the younger generations, great attention is given not only to the "quantity" but also to the "quality" of work. Giving meaning to one's work, making it coincide with "high" aims, is perceived as an essential added value.

Maria Cristina Messa spoke of "galaxy training" and of the flexibility that is increasingly necessary to create individual study paths, without underestimating the programs of study that are broader in scope, which are capable of ensuring a solid foundation for any subsequent specialization. "Our students are highly appreciated abroad for precisely this reason," explained the Minister. That is, the great, underlying culture that supports and gives substance to personal creativity. But in the university sector, the Italian system is still very limited. It is difficult for a student to risk an academic career if what follows is twenty years of temporary employment before they obtain a position that guarantees a minimum of stability. In addition, the fragmentation between the various areas of knowledge often does not help to create a system and provide opportunities for students to develop interdisciplinary skills, with internships in the "real world". And with respect to this, autonomy in research is also a value to be protected, Messa continued.

Prophecies of doom are sometimes overturned by data that run counter to the gloomiest predictions. For example, before announcing the 2021 program, Bernhard Scholz spoke briefly about fundraising for the Meeting: private donations did not decrease but increased greatly during the pandemic. And, turning to the theme of interreligious dialogue, the speed with which the encyclical Fratelli Tutti was translated by the Muslim publisher Medina is striking. At the Meeting, the dialogue between the great monotheistic religions will continue, focusing on the Mediterranean as a shared space, with a roundtable discussion with the mayors of the cities of Beirut, Florence and Tunis. Two exhibitions will specifically present two writers as antidotes to homologation: Pasolini, who lucidly described the active forces of modern economies capable of undermining the singularity of the person, and Tolkien, who admirably described the polyphony of creation with his narrative frescoes, an immense mosaic where every tile is necessary and contributes to the beauty and harmony of the whole.#Meeting2021