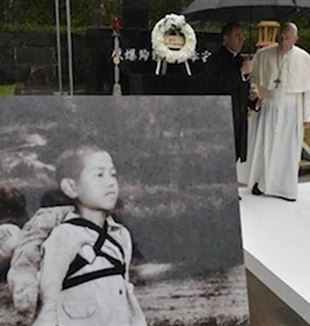 Italy ratifies the UN Treaty
on the Prohibition of Nuclear Weapons

On January 22 2021, at the end of the 90-day period following its 50th ratification, the "Treaty on the Prohibition of Nuclear Weapons" became legally binding for all countries that signed it.
This Treaty, which had been voted on by the UN in July 2017 by 122 countries, now makes it illegal to develop, test, produce, manufacture, acquire, possess, store, install or deploy nuclear weapons in countries that have signed it.
Italy neither signed the Treaty when it was adopted by the United Nations, nor did it subsequently ratify it. Among the first signatories of this treaty is the Holy See.
In Italy, at the bases of Aviano (Pordenone) and Ghedi (Brescia), there are about forty nuclear weapons (B61). And at the Ghedi base, facilities are being expanded to accommodate the new F35 fighter-bombers, each costing at least €155 million, capable of carrying new and even more powerful nuclear weapons (B61-12).
Italy has pledged to buy 90 F35 fighter-bombers at a total cost of more than €14 billion, plus maintenance and operational costs.
Nuclear weapons are weapons of mass destruction and, therefore, are ethically unacceptable, as Pope Francis also reminded us during his visit to Japan on Sunday November 24 2019, in Hiroshima:

On January 22 2021, authoritative representatives of the Catholic Church from all over the world, including Cardinal Gualtiero Bassetti, president of the Italian Bishops' Conference, and Msgr. Giovanni Ricchiuti, Archbishop of the Diocese of Altamura-Gravina-Acquaviva delle Fonti and president of Pax Christi Italy, have in turn signed an appeal urging governments to sign and ratify the United Nations Treaty on the Prohibition of Nuclear Weapons, supporting Pope Francis' leadership in favour of nuclear disarmament. Other Italian bishops have spoken publicly in this direction, and numerous local branches of our associations and movements have done the same.
To all these appeals, we now add our own, united with conviction to the national campaign "Italia ripensaci" [Italy think again], which has registered vast and strong mobilisation on this issue, and we now call loudly on the government and parliament to ratify the UN Treaty on the Prohibition of Nuclear Weapons.
Peace cannot be achieved through the threat of total annihilation, but through dialogue and international cooperation.

“The pandemic is still spreading, while the social and economic crisis remains severe, especially for the poor. Nevertheless – and this is scandalous – armed conflicts have not ended, and military arsenals are being strengthened. That is today’s scandal.”
(Pope Francis, Urbi et Orbi Message, April 4 2021, Easter Day).