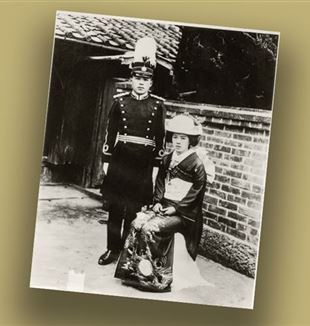 First of May 2021. Seventy years ago, the gift of Takashi Paolo Nagai’s life (1908-1951), the Japanese radiologist physician who survived the Nagasaki atomic bomb, came to its conclusion. Thanks to Paul Glynn Pace's book, A song for Nagasaki, we got to know his incredible and moving human and story of faith, together with that of his wife Midori Marina (1908-1945). Some of us were so deeply marked by their testimony that we wanted to learn more about them and wanted to share them with friends. Thus the exhibition Takashi Paolo Nagai, announcement from Nagasaki was born, realized for the 2019 Rimini Meeting. There, together with more than 15,000 visitors, we retraced the story of Takashi, a man of science and a convinced positivist atheist, whose reason was so open that he allowed himself to be moved by the provocations of life and death, until he guided to Baptism by his encounter with Midori, a surprising example of faith and virginity, who would later become his wife. 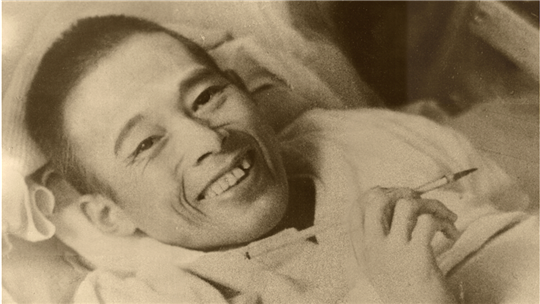 On August 9, 1945, Midori’s life was fulfilled in the ultimate sacrifice, carried to Heaven by the nuclear mushroom as she clutched her rosary; Takashi began to walk the path of a sought-after and profound poverty of spirit, which led him to experience the Lord's friendship in the desert of the atomic bomb and to live that hundredfold of faith that made him a living announcement of hope and peace for his people. That is why so many go to seek him out. They called him "the saint of Urakami" because, being ill with leukemia, he was the source of life for his fellow citizens, and therefore offered them the possibility to rebuild upon ruins, as he wanted to show everyone with the 1,000 cherry trees he had planted with his first income.

After the exhibition, us curators, noticed with amazement that the number of people marked by the testimony of these spouses continued to grow. People contacted us to learn more and tell us about the companionship they had become in their daily struggles. The exhibition was then re-proposed in various Italian cities in an itinerant format and, after the explosion of the pandemic, there were many requests, from many parts of the world, to present it online. We reached many countries on the five continents and many people, noting the exceptional Christian virtues of Takashi and Midori, asked us if there was an ecclesial process underway to recognize them as companions on the journey. Thus, surprising ourselves first of all (we would never have thought of undertaking such a thing in our lives), and confirmed by a series of unexpected encounters and signs, we assumed the responsibility of reporting their reputation for holiness to the Church, so that it might consider undertaking the process of a possible cause of beatification and canonization. In March of this year, we established the committee "Friends of Takashi and Midori Nagai", which serves promote knowledge of the exceptional life of this married couple throughout the world, and to propose itself as canonical actor to the Diocese of Nagasaki and the Congregation for the Causes of Saints to promote the opening of a possible cause of beatification.

It is a grace in this difficult times to have companions upon the road to look towards: "Seek out day by day the faces of the saints, so that you may rest in their words” (Didache IV,2).

For more information, please visit www.amicinagai.com and write to info@amicinagai.com. The exhibition catalog is also available [in Italian].


*Director of the committee "Friends of Takashi and Midori Nagai"