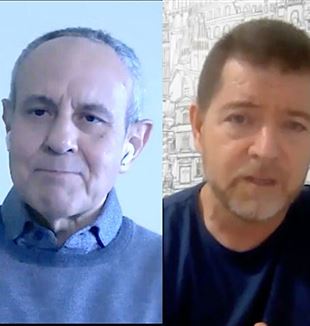 On Friday, March 5, Pope Francis began his apostolic journey to Iraq. A historic day that coincided with the beginning of the sixth edition of Rio Encontros, opened precisely by the presentation of the exhibition "Gestures and Words. Jorge Mario Bergoglio, an original presence".

Born in 2014 inspired by the Rimini Meeting, the Brazilian Encontros this year proposed three days of events online due to the pandemic, which is registering dramatic numbers of infections in the country. But even though it was held remotely, there was no lack of precious help from many volunteers, who were involved in the broadcasts and translations to allow viewing throughout Latin America.

While Francis in Iraq was expressing himself with concrete gestures and spoke of dialogue, welcome and forgiveness, each roundtable at Rio Encontros seemed to echo his messages. This happened, for example, during the launch of the exhibition on the Pope's life and his devotion to Our Lady of Aparecida, presented by Argentine lawyer Alejandro Bonet and artist Hilda Souto, of São Paulo. 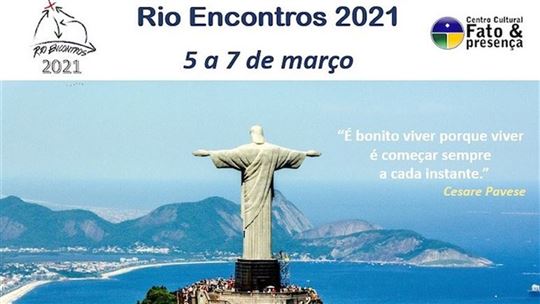 On Saturday morning, the theme of education was addressed, with the participation of Carolina Brito, director of a bilingual school in Boston (USA), and Italian professor Franco Nembrini. She moved everyone by recounting the change she saw with her own eyes when faced with the fracture in relationships due to political struggles, when thirty-five mothers got involved to help out: "The most educational moment of the year, there was no division between us”. Nembrini, responded with his own account, "The adult’s job is not to be afraid of reality.” Another international meeting featured Rony Rameh from Lebanon and Alejandro Marius from Venezuela. In situations of war and violence, these men remain where they are, by birth or "adoption" of that people, to respond to their vocation. In addition to the meetings, Rio Encontros also included two cultural moments, with a concert by pianist Marcelo Cesena, and an evening of music and poetry.

The highlight of Encontros was on Sunday, with Julián Carrón, at his first Brazilian event thanks to the video connection. "It is good to be alive because living is beginning, always, every moment”: this phrase by Cesare Pavese was the title not only of this meeting, but of the whole three days. Carrón was joined in the dialogue on this topic by Evaldo José Palawaski, a sports journalist, but also a philosopher and passionate about the theme of education.

"Waking up every day is wonderful, but at the same time it is dramatic," Carrón began. "I remember my father who one day did not wake up. He was not sick; he just did not wake up. Thus I can no longer talk about awakening as something obvious. Awakening is a gift, just like life. Regardless of what we have to do, that is the first new thing." And when we wake up and worries begin to arise, "we can be afraid, distracted, or open to possibility." It is the same challenge we all face with the pandemic, towards greater self-awareness.

Evaldo recounted his experience as a volunteer in East Africa. In January 2020, he left for the UN refugee camp in Dzaleka, Malawi, opened in 1994 for survivors of the Rwandan massacre. At the time, there were 9,000 refugees. Today, the camp is still in the same place and hosts 48,000 people who continue to seek refuge from wars. "Upon arrival they are given a new identity. Even today there is no structure, no running water, no electricity. And the challenge we took on there was to build a small school for 200 children, when there are almost 13,000 in a very vulnerable situation." With the arrival of Covid and the closing of the borders, Evaldo was stuck there for five months, away from his family, "but I was able to learn a lot and I felt privileged to be able to participate in this mission."

"On Sunday mornings, the camp stops and the churches fill up, with many prayers, songs and dances," the journalist recounted. "It seems that the experience of having lost so much in their lives makes them repeat, 'God is the only one who does not abandon me.' They have nothing. A thousand of them share one bathroom. But they sing, they are joyful. You look at your problem, your pain, and you realize it is nothing compared to that. I was there to help, but I ended up receiving so much good myself. I learned more living there than I would have in a Master’s program. It was a new beginning for me."

On the subject of education, Carrón took the floor again: "The great emergency is how to awaken interest today". He gave an example: "In these days, a mother was telling me that her whole family had been quarantined and that her ten-year-old son asked her how she had managed to stay at home with them every day. The son was struck by the preciousness of his mother's presence, because of the way she had lived those days." This is an educational experience: "Evaldo also educated his daughters from afar, responding to the needs of Malawi." In fact, Evaldo recounted how his daughters had sent him message saying that if he was OK there, they would be too. Carrón added, "These are examples of what it means to educate today. Fr. Giussani said 'In a society like ours, you cannot create something new except with your own life’. Each of us can, by living, witness that there is a way of being in reality, in circumstances, without erasing them. Facing them can be meaningful for us. And this cannot help but have an impact on those around us, if they become aware of it, as Evaldo told us and as this child's mother told me. The question is whether there is someone who introduces us to reality, a witness who has something to say with their life."

During the closing meeting of Encontros, two women shared their experiences from northern Brazil. Andreia Brasil Santos, a university professor and local leader of the CL community from Manaus, described the drama of the collapse of the local health system bringing the population to its knees. The professor spoke of the death of two friends from Covid, an event that made her rediscover herself. With the lack of oxygen in the hospitals, thinking of her "brothers" who were suffering, she says she felt "an anxiety she had never experienced before, to the point of feeling a pain in her chest." Yet, being faced with her own helplessness and fragility was a starting point for her to ask herself, "In whom do I trust?" Even to the point of surprising herself, she added, of asking for mercy for those who would be responsible for taking care of the people.

Cláudia Figueiredo, an employee of a state-owned company from Macapá, spoke next, revealing the harshness of what they are experiencing during the pandemic, aggravated by the problem of the four-day power blackout that the Amapá region suffered at the end of last year, with three weeks of power rationing soon after: "There is no communication without electricity, soon there would be no water, and then no petrol.” A cascading series of problems, including the scorching heat and fear for one's safety. "It seems absurd to say that we saw beauty even in this situation, yet we saw great solidarity emerge. For example, my brother and son would go out and stand in line to buy water. And they did not just think about us, anything we could bring home extra, we distributed to those in need around us." Claudia echoed the words she heard from Carrón: "A little while ago he said that 'we cannot control the pandemic, we cannot control reality.' We cannot control the blackout, but we have the possibility to live these events differently, and not to be overwhelmed."