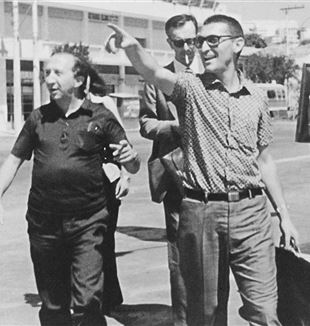 “The new self is born in Christ’s gesture of choosing, which places him within the human companionship generated by His Spirit, i.e., into the Church. This election, this choice, always takes on a concrete historical form” (L. Giussani–S. Alberto–J. Prades, Generating Traces in the History of the World, McGill-Queen’s University Press, Montreal 2010, p. 70).

These words from the School of Community we have just studied describe the life of Fr. Pigi Bernareggi, which never strayed from the banks of that concrete historical form that is our charism and was always marked by a dual fidelity. Above all, the fidelity of God, who chose him to advance His plan of salvation and never abandoned him. And then, the faithfulness of “don Pigi,” who recognized and followed the call of the Mystery, which first reached him in 1954 in a high school classroom at Liceo Berchet in Milan through the unmistakable voice of Fr. Giussani. He remembered his own “beautiful day” for his whole life, “He came into our lives like a hurricane, and we found ourselves waiting for the next lesson.” Why? “He asked us to use our reason and intelligence in a new way. He did not want us to use them to create outlines and catalogues of various ideas, but to open them up to discovering the mystery of being, the final meaning of human experience.”

Through Fr. Giussani, Christianity erupted into his life as a present event: “What I received in GS was the certainty of Christ’s presence in everything, always, because if he is not in the passing instant, He simply isn’t; He would be merely a theoretical framework you refer to every once in a while, a kind of refuge or spiritual retreat. The great discovery I made with my friends in GS was that the substance of the passing instant is Christ’s presence. If He is not in the passing instant, He doesn’t exist.” Pigi reminds us that Christ is something happening now. That is the biggest patrimony he passes on.

This is why his priestly motto was “Put nothing before Christ” (St. Cyprian). This was the awareness that made him a protagonist in his daily witness amongst the favelados of Belo Horizonte. He never walked any other road, not even when he had to walk through the dark valleys of loneliness and illness. He always followed the subtle method of God. Look how much fruit his willingness to follow that method produced!

In a 1999 letter to Rosetta–who shared the adventure in Brazil with Pigi until the very end–Fr. Giussani spoke of him as “one of the greatest names among all our missionaries. And Pigi also generated some of the earliest beginnings of the Movement. For me, Pigi embodies the ideal of our Movement: to bring CHRIST to life today just as Peter and John saw him yesterday.”

We ask that the ideal incarnated in Pigi might fill our lives, so that what Peter and John lived becomes more and more the daily experience of each one of us: “For I am convinced that neither death, nor life, nor angels, nor principalities, nor present things, nor future things, nor powers, nor height, nor depth, nor any other creature will be able to separate us from the
love of God in Christ Jesus our Lord” (Rm 8:38-39).