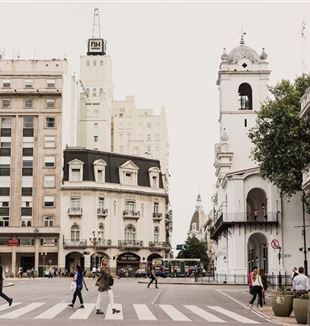 On Wednesday, December 30, 2020, the abortion law was approved in Argentina. We realize that for many women an unwanted pregnancy, sometimes at risk, or the result of violence, can be a terrible drama that is difficult to accept. But suppressing an innocent life is not the solution, nor can it relieve the mother's anguish. That is why the Church has always defended both lives. There are other ways. The legalization of abortion is a "sign" that ratifies the option of the "culture of death." In this same period, another law reflecting the same culture was passed in Spain, on euthanasia. These are facts that show that power today is dominated by an option in favor of the idolatry of money that enslaves, of power that excludes, of consumption that discards. Everything that opposes this "golden calf" must be eliminated, either at the beginning of life or at its end. All media technology, information and algorithms focus upon imposing this throwaway culture. 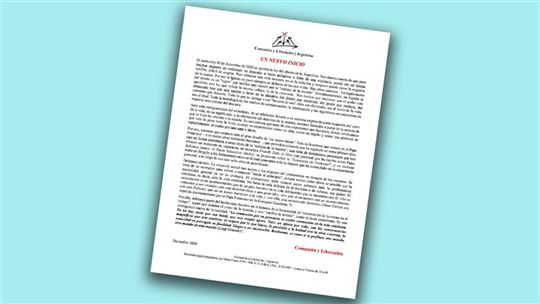 Faced with this dizziness of nonsense, of nihilism raised to its highest expression as a denial of the value of life, of its meaning, and of the affirmation of the dominance of death, we are called to start from the certainty that Life has conquered death. It is a certainty that arises from an experience, in which we verify that Life is worth living when it is lived as a gift and as the fullness of fulfilment: the hundredfold here and now.

For this reason, we believe that we are faced with the great challenge of "a new beginning." This is the certainty we see in Pope Francis - and in so many other human realities - who in recent days have providentially offered us, almost simultaneously to these laws of the "culture of death," a series of personal testimonies that offer us a horizon of hope: the encyclical Fratelli Tutti; the most personal book he has written as Pope, Let Us Dream; the Global Educational Pact; his proposal in the "Economy of Francesco"; and a special message addressed to the Latin Americans in which he focuses upon the richness he has accumulated in his personal experience throughout his nearly eight years of pontificate.

We must say it. The current situation takes us back to the origins of Christianity in Roman times. It is a time to start again "from the beginning," because never before has it been perceived that the general mentality is no longer Christian. Christianity must be reborn as a stimulus in the face of daily problems, that is, in the face of daily life. It is not enough to defend doctrine or values, even if they are right. Christianity is an event that determines a decisive turning point in the life of those who encounter it: "Being Christian is not the result of an ethical decision or a lofty idea, but the encounter with an event, a person, which gives life a new horizon and a decisive attraction (Deus Caritas est, insistently repeated by Pope Francis in Evangelii Gaudium, 7).

We must therefore start from the most decisive fact of human history, "the incarnation of the eternal in time", the one that dominates the course of history and "changes our vision," like the Good Samaritan. It is a new way of understanding reality: "…being moved by His presence turns into being moved in our daily lives. Nothing is useless; nothing is extraneous. We start to have an affection for everything, everything, and the magnificent consequences of this are respect for what you do, precision in what you do, loyalty to your concrete work and tenacity in persevering to the end; you become tireless. Really, it is as if you were outlining another world, another world within this world” (Luigi Giussani).