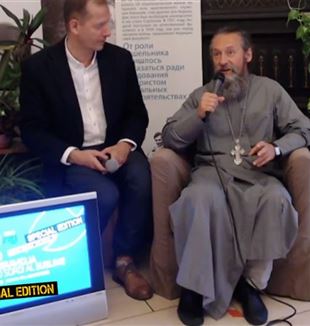 A live video marathon devoted to the Rimini Meeting. It was broadcast on Sunday 23, from the Library of the Spirit in Moscow and lasted 5 hours and 55 minutes. From 2 p.m., local time, until 8 p.m., just in time to connect to the final meeting broadcast from Rimini. This has been one of the initiatives through which the Russian "Ambassador" volunteers wished to publicize the Meeting in their country (link to the full video).

The host of the "program" was Jean-François Thiry, the director of the Library, who introduced excerpts from previous Meetings, excerpts of talks from this year’s edition. The schedule was dense: from the intervention of the Metropolitan of Minsk, Filaret, in 2010, to that of the spokesman of the Patriarchate of Moscow, Vladimir Legoyda, on the historic meeting in Cuba between Pope Francis and Patriarch Kirill in 2015; from the testimony of Monsignor Paolo Pezzi, Archbishop of the Mother of God at Moscow, in 2010 to the dialogue with Julián Carrón on hope, the video of the exhibition "Living the reality" and the performance on Dostoevsky presented by Tatjana Kasatkina from this year’s 2020 edition. Every hour or so, from the “Tg Meeting” space, a new friend, Daria, summarized the contents of each day of the special edition, although until a few months ago she had never heard of the Meeting. A few minutes, but effective: from Mario Draghi to Mikel Azurmendi, from Joseph Weiler to González Sainz. They could not all be mentioned, but the idea was to arouse curiosity. 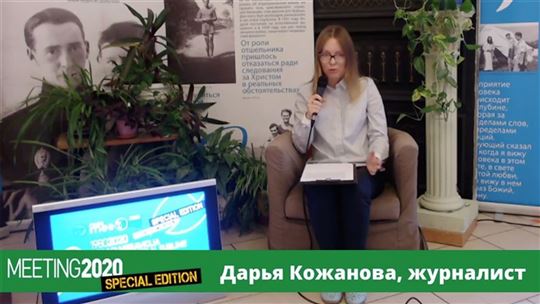 Alongside Thiry, Aleksandr and Margharita Bayanov, from Novosibirsk, shared their decades of experience of being visitors at the Meeting. "When you enter, you feel an embrace that does not leave you until you get on the plane on the way back," said Margharita: "I took the meetings I listened to and the exhibitions I saw to Novosibirsk, which accompany me throughout the year.” This year no plane to Italy, but they were able to follow several meetings translated into Russian.

Roman and Marfa, instead, recounted how important it was for them to participate in the preparation of some exhibitions, such as the one dedicated to Metropolitan Antonij of Surož and Mother Maria Skobcova. "The first thing I wanted to do when I came back from Rimini, was to tell my family and friends about the exhibition. That experience is still alive in me today.” For Roman, instead, "participating in the Meeting means asking the question: ‘Where does all this come from? It is not a matter of organization. Why people do what they do is the real thing to discover. If we discover it, great things can also be born here in Moscow." 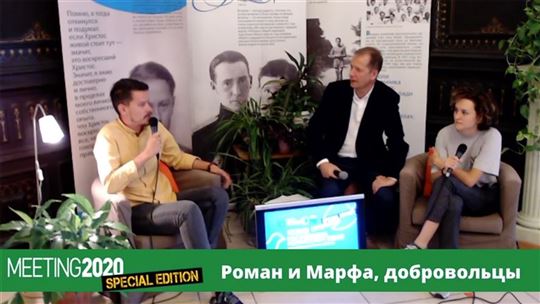 Also live at the Library of the Spirit were the Orthodox priest Fr. Andreij Iurevic and his wife Olga, guests at the 2015 Meeting. "We did not really know where we were going," she confessed: "But as soon as we arrived, we felt like we were flying. There was an atmosphere that I had dreamed about for a long time and that I then tried to describe to my Russian friends, even if it is very difficult to do so in words". The priest, for his part, said: "I liked the atmosphere of openness. We were there all week and I never had the desire to go to the beach. We have the beach in Russia but not an event like this". And his wife added: "We were there five years ago, but today, with this live streaming, we are reliving the Meeting. I can see it from the way my husband's eyes have lit up again."

Read also – The Meeting is wherever I am

Vika, who has been a volunteer at the Pre-Meeting for many years, also participated: "It helped me understand the ‘medieval’ conception of work. It is a bit like becoming a co-author of creation. And the attention to detail is what struck me the most." The live broadcast ended with the invitation (it was 7 p.m. in Italy) to follow live, from the Meeting’s platforms, the final meeting in which the Russian Niuta Federmesser participated. But first there was time to listen to the words pronounced by Monsignor Pezzi in his speech in Rimini in 2010: "Twenty-five years ago I was among the volunteers who set up this stage. At that time it was easy to follow and feel part of something bigger than me. Today they asked me to speak from this stage. For me it is essentially the same. I have always sought one thing in life: to respond to the Mystery of God.”#Meeting20