"Why did I not see it?" There is a world in the question that the Spanish intellectual Mikel Azurmendi asks himself in one of the most surprising dialogues of the Meeting: a video-interview presented to both those in Rimini and to the many connected in Italy and abroad. He says: "The whole problem is in seeing". And this is also true before a week like this, which should not be taken for granted. Unprecedented days, rich, but at the same time sacrificed and disorientated because they lacked what has always animated them: the river of life, the thousands of encounters in the flesh, incalculable and rationed this year as the Palacongressi was only letting one person in at a time, scanning barcodes and with a temperature check, with masks and social distancing. But "the problem is that of not wanting to see," reiterated another Spanish writer, J.A. González Sainz, in the beautiful series of dialogues "Not too much to ask": "It is important to keep the tension alive, towards things, towards facts, towards reality.”

"Without wonder, we remain deaf to the sublime.” This is how the organizers described the reaction of many people to the title: can you talk about "wonder" today? In what the Pope in his message defines as "a dizzying moment in history", in which "paralyzing uncertainty" dominates, as Mario Draghi said in the opening meeting. But there is one aspect that escapes this uncertainty, as described by the former president of the ECB: "Our ethical commitment", which “the Meeting testifies to, because it finds strength in difficulties” In fact, at the outbreak of the crisis in March, there were those who wanted to rethink everything. "For us, the closure was a reopening," summed up Bernhard Scholz, who has been at the forefront of this special edition, but who did not expect the things he has seen.
"The biggest surprise was the Meeting in the squares,” in over a hundred cities around the world, from Karaganda to Buenos Aires, where the creative gratuitousness of some people allowed the Meeting to be proposed to many. Then there were the volunteers, three hundred instead of the usual three thousand, but full of enthusiasm even when it came to do boring tasks, spending their vacations there, and there were the virtual and physical exhibitions, Italian and international guests, performances, concerts, daily radio and news talk-shows. New formats, new problems, a new energy.


"The awakening of the human? It is here before our eyes!" This is how Julián Carrón began his dialogue on hope in Rimini (the full text will be published in the September issue of Traces): "No one would even have dreamed of organising the Meeting, of being able to express hidden resources that come to light in the face of difficulties. The reawakening is happening in front of us." It was not just that the structure of the Meeting that was held up, nor was it a question of looking for the positive aspects of a blended edition. Man is awakened when something amazes him.

"You can only look at something when you admire it." This is how Azurmendi responded to the initial question, while describing with rare loyalty his search, his encounter with the Christian community that overturned his convictions ("I did not expect for any of this to happen in my life”) and that led him to write a book (L'abbraccio [The Embrace]). But he did not stop at what he wrote in those pages because his life was at stake. And it is alive and on a journey ever since he wanted to “climb up and lean out” and, he says, “and I saw all of you”. He came across a voice on the radio, then a series of people, families, young people... a "tribe" with an "exceptional lifestyle".

The Pope's message to the Meeting offers the key to the title: "It can be a powerful reminder for us to descend into the depths of the human heart, suspended by the rope of wonder.” The week in Rimini follows this rope as it penetrates into life: the depths of discoveries in biology, from microbacteria to our own nature ("we are a prodigy, true, but we are not what we think we are", Gilbert Scott); the response of doctors immersed in the drama of illness and death, before, during and after Covid; the initiative of principals and professors who do not resign themselves; the young people from the European IMF orchestra who continue to play together from seven different countries even if at a distance. These are all testimonies in which "humanity emerges and is the true wonder", said Joseph Weiler in his talk on the title of the meeting.

Many questions emerge in the face of the data of the outbreaks: the increase in cases, the number of deaths, the fall in employment, school dropouts and the usual but more acute problems, from debt to the fall in birth rate, bureaucracy, inequalities ... But it is not obvious to ask questions and let reality ask them: if the gaze of wonder "is not cultivated," continues the Pope, "we become blind to existence…stop asking questions about reality." It is "amazement that sets life in motion, allowing it to start again in any circumstance.”

Nothing, however, is able to cultivate this wonder that fades, if not a carnal encounter. Anna Konstantinovna Federmesser, in her network of hospices in Moscow, always re-starts from the eyes of the elderly and those who “die happy”, and the photos she showed at the Meeting revealed this. What awakens is the gaze when it meets another who sees. It is difficult to define the Meeting, even more so when its appearance changes as it has this year, but its essence comes to light when something different happens, an overabundance, as happened in the meeting with Eugenio Borgna and Umberto Galimberti. A dialogue that was a crescendo, where the space of concepts is invaded "by their moving sincerity towards themselves and in front of everyone", said Costantino Esposito, who moderated the dialogue and was the first to be surprised. Galimberti, after an acute reflection on nihilism and rationalism generated by technique, revealed his grief over his wife's death, said that life goes on "with love", love as "cognitive faculty", without which existence is extinguished. In Borgna’s every answer, he revealed himself as “pierced” by his encounter with Fr. Giussani, by those "tearing eyes", and he repeated it intensely: "The gaze. The gaze! The eyes speak more than words." And he offered the public this gift, that of profound listening to "what moves within oneself and within the other."

"From the first glance at them, I understood it all.” This is a quotation from Dostojesvsky’s The Dream of a Ridiculous Man, performed on the first evening. Matfej is one of the young people (Russian and Italian) who presented their work on the text: "When I read those words I thought about when you look at something very beautiful and then everything happens: bam! You meet someone and, thanks to their eyes, their voice, you understand everything! Bam!" The burning force of an encounter in which you can see again, understand, know yourself and everything else. “What hope is there that something can move in the life of someone who is imprisoned by the loss of meaning?”, concluded Borgna. "Just an encounter. The madness of creating encounters that are characterised by the possible and not the impossible.”

The Meeting unfolded along the lines of what could not be and what was, because of the change produced by hidden actions: "What families, Italian ‘oil’, doctors, nurses, those who went to shop for their elders, those who became teachers to their children while they continued working, have done for months in silence.” (Gigi De Palo). The path consists in looking, as Giorgio Vittadini says, “not at a country that is drowning but at the vitality of those who react,” because “excessive suspicion will not help to do what must be done” (Luciano Violante). The question of what, in the present, is capable of generating trust again was the key to the chain of meetings on politics, the crisis of democracy, health, training, work, which focused on the novelties that have emerged in this emergency, European negotiations, the rediscovery of what is essential in patient care or the centrality of the school and educational system. The opportunity to be more realistic when making decisions must not be wasted, but first you must assume greater personal responsibility: "It is my decision and your decision that will change the world, because the governments will decide in a long time," says the Nobel Peace Prize winner, Muhammad Yunus, describing the unsustainable pace at which the world risks crashing.

The horizon goes beyond the current contingency, it is about man's attitude in front of any difficulty, as revealed in the testimonies on the last day from Syria, Venezuela, Russia and Uganda or as stated by Maurizio Maggiani: even following "the anarchist madness" in infamous places - Tuzla under siege, the Kigali refugee camp or the Brazilian slums -, "I never, ever only saw despair." He saw man "participate in wonder."

Recriminate or live? Chiara, in her blue T-shirt, was happy to spend hours under the sun, pointing a thermometer at people to measure their temperature, because "I can look at each person in the eye". Cecilia worked all year round on the exhibitions and owes her gratitude "to the enthusiasm with which people abroad are following them... they overwhelm me. They give value to my work, a value that sometimes I lose when I think it has to be in a certain way.” As the great German artist Gerhard Richter writes: "You have to make something happen rather than create it." It was from the experience on wonder as an "antidote to ideology" that his extraordinary pictorial adventure was born, as recounted by Giuseppe Frangi in the meeting on art and on this "son of a skepticism that never surrendered to himself." 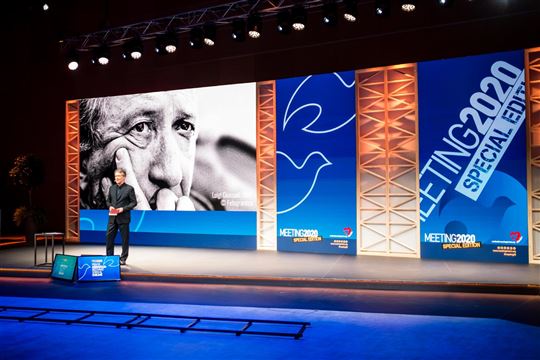 As the week unfolded, a need was outlined, our need today: in the meeting of the last day, Cardinal Gualtiero Bassetti, says that it is "the time of the prophets", of those who "know how to listen", "read the world around us in depth.” Cornel West echoed him in the dense, exuberant video-dialogue with jurist Robert George: "A prophet is he who hears a profound call, something greater than himself."

At the center of the Meeting, physically, was the exhibition on the Basilica of the Nativity. In its splendour, it asks every man and every age where their hope lies. Azurmendi concluded by saying: " I would not have believed in God. Because God is an idea. Truth produces life. And if I look with admiration at a life, I must love it.”#Meeting20