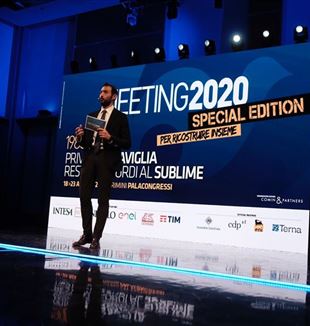 So far, the most beautiful image adopted to explain the title of the Rimini Meeting was the one proposed by Monsignor Francesco Lambiasi, Bishop of Rimini, during the online presentation of the 2020 edition: "In the Neapolitan nativity scene, there is always a statuette of the "amazed" person, the shepherd who raises his hands to his forehead because he has seen the light coming from afar from the manger in Bethlehem." And it is an image of a simple man, a shepherd, who is capable of wonder and who, for this reason, is able to capture the appearance of the sublime.

To begin from the Meeting’s title, "Devoid of wonder, we remain deaf to the sublime", is not to beat around the bush, despite the health emergency and the very uncertain future due to the consequences of the pandemic. The choice of this year's theme, which took place in August 2019, was prophetic, as the new president Bernhard Scholz said: "Wonder is not only emotive, it is the awareness that the other is given to you. Therefore, wonder is the starting point, amazement is the point from which to re-start. Because from wonder comes the motivation to face difficult and complicated circumstances, like those that await us in the times to come." Hence the courage not to pass up an edition of the Meeting that will be special, can be perceived as even more necessary.

And it is the very form of the presentation of the program, broadcast from the Palacongressi in Rimini, that gave an idea of what the edition will be like, which director Emanuele Forlani defined as "blended". That is: partially in person, partially via video connection. It will also be transmitted online and will be accessible from every corner of the world. 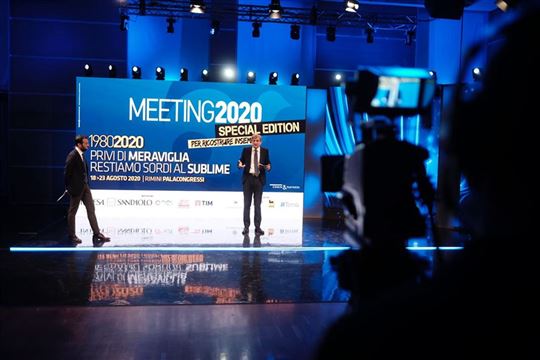 Stefano Bonaccini, President of the Emilia Romagna Region, and the Mayor of Rimini, Andrea Gnassi, spoke at the Palacongressi. Gian Carlo Blangiardo, President of ISTAT, and Chiara Carozza, the former minister of Miur, were also connected online. Actor and director Gioele Dix also spoke from a distance, talking about his friendship with the Meeting and the evening event with various artists that will conclude the 2020 edition. Bishop Lambiasi and art expert Mariella Carlotti, who will curate an exhibition on the history of the Basilica of the Nativity in Bethlehem (that of the "amazed" shepherd), also spoke.
Lambiasi, in his speech, again touched upon the theme and on wonder: "Even Jesus is amazed: by the birds in the sky and the lilies in the field. But also by the return of the Prodigal Son and the strong faith of the Canaanite woman. Jesus also infects his disciples with amazement. He conquers them with his human warmth. Jesus is someone who feels loved by the Father and came among us so that we would not be wrong about God. And when He makes the veil that covers God's face fall down, He allows us see Him so that amazement is inevitable."

The complete program can now be found on the event’s new website, but here are some highlights. Among the guests: the 2006 Nobel Peace Prize winner Muhammad Yunus, intellectuals and opinionists such as Sabino Cassese, Umberto Galimberti, Enrico Letta, Ermete Realacci, Luca Ricolfi, Luciano Violante, Joseph Weiler (who will give the talk on the title of the Meeting), writers Paolo Giordano and David Quammen. The president of the IEC, Cardinal Gualtiero Bassetti, and the president of the Fraternity of CL, Fr. Julián Carrón, will also return to Rimini.

Some of the topics that will be addressed in the Special Edition: care and health, the relationship between subsidiary culture and sustainable development, Europe, scientific issues (this year’s focus will be upon what it means to be alive), post-Covid challenges, work, the future of democracy, innovation, international cooperation, education, art, literature. The will be ample room, as always, for testimonies from around the world. 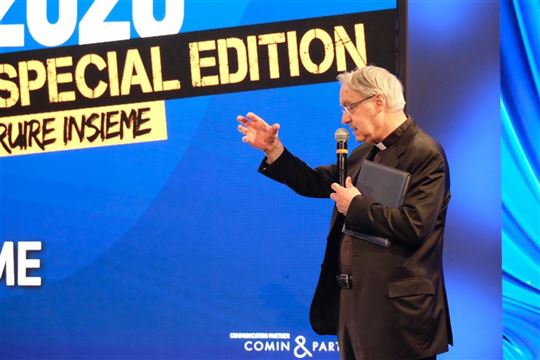 The performances: evening performances on Dostoevsky ("The dream of a ridiculous man"), Federico Fellini and Beethoven. One evening, Brunori SAS, Malika Ayane, and with them journalist Michele Brambilla and Cardinal Matteo Zuppi, will participate in a tribute to Francesco Guccini for his 80th birthday.

Read also – Brazil: If our heart is not in quarantine

There will be four exhibitions: "Being alive”, which will investigate the phenomenon of life from a scientific point of view, "To live the real”, dedicated to the tenth chapter of Fr. Giussani's Religious Sense, "We are at the top! The summit of K2 and the faces of a people”, on the conquest of the highest mountain in the world, and "Bethlehem Reborn. The wonders of the Nativity".

In the meantime, as the official start of the Meeting on August 18 approaches, the Meeting’s website has begun a series of meetings organized by Tracce [Traces] (every Friday at 9 pm Italian time), and a podcast series "Bookcorner", of presentations of books edited by the Italian Association of Cultural Centres.