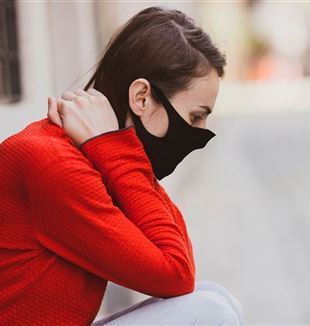 The theme - "Self-consciousness and the experience of the present in the days of Covid-19" – a sharp theme that does not give way to academic speeches. Three speakers, who have personally played their part: Fabrizio Asioli, Giovanni Stanghellini (both scholars of psychiatry and renowned psychotherapists), and Julián Carrón, professor of Theology, priest and guide of Communion and Liberation. Two and a half hours of intense dialogue, with 480 people connected online, not just students. At the end, a handful of questions collected by the moderator, Professor Cesare Maria Cornaggia. This was the second of the four meetings for the 2020 optional course promoted, on 11 May, by the Department of Medicine and Surgery of the University of Milan Bicocca, entitled "Psychical discomfort and society", focused upon "self-consciousness".

The speakers addressed the theme from their different perspectives, in relation to their respective skills and experiences. It was surprising to watch the performance of three voices that were, so to speak, in “sympathetic resonance”, like the strings of certain musical instruments at frequencies able to intercept a secret common focal point. It was not a phenomenon of repetition, but of symphony.
When Asioli used the words “crisis-humility” to approach the proposed topic, he did not replicate, but entered into “sympathetic resonance,” with the path proposed by Carrón – the "irruption of reality- reawakening our humanity". The same applies to Stanghellini, who used "wound-recognition" to shed light on the tangle of finding oneself and the positive relationship with others. These three pairs of concepts characterize the three interventions.

For Carrón, the outbreak of the pandemic represents an “irruption of reality” into our lives, usually anesthetized in the illusion of having everything under control. “Several observers have begun to consider this irruption of reality as the first trigger for the adventure of self-consciousness". An adventure whose possible trajectory has been recently traced by Carrón in his book-interview with Alberto Savorana, Reawakening Our Humanity. Now "pure and hard reality has exposed our fragility and, at the same time, has awakened the inescapable questions of meaning that are the fabric of our being."
For Carrón, the pandemic has provoked the constitutive dimension of our being, which is dependence, to emerge: "We are well only if we are in relationship with a you. Only in relation to a you who loves and accepts it, can our ‘I’ love and accept itself." However, in turn, this human presence is fragile, insufficient with respect to the infinite breadth of my desire. Ultimately, "only if God Himself welcomes me and I become certain of it, can I truly embrace myself, certain that it is good that I exist."

Fabrizio Asioli perceives that we are living a deeply traumatic crisis. “Each of us has gone from feeling like the master of their own life, to being confined and stripped of everything;
from time manager to condemned, to a danger which we do not know how long will last; from intentionally ignorant of death to a daily spectator of its inexorable presence". But what does "crisis" mean? "Crisis implies rupture and discontinuity, but it also indicates the possibility of change. It places an ambivalent reality in front of us, which can make us suffer or be reborn."
Asioli is not at all convinced that everything will improve automatically: "We tend to resist change, we are afraid of rupture and interruption, we fear the trauma of pain and loss.” Asioli observes, quoting Paul Valéry, that “every new life begins with an interruption. The unborn child lives comfortable in the mother’s womb, without trauma, in an earthly paradise; coming into the world coincides with an abrupt rupture of this state and with the experience of pain and discomfort.” How does this impact one's self-consciousness? It can be "a great lesson in humility." If our image of omnipotence is shipwrecked, "we can now relativize our “I” towards the ‘us’", says Asioli. Without falling into easy optimism, he has perceived positive signs in life during these recent months: "We help each other more, we are more attentive and disciplined, we appreciated the work of doctors and those on the front line, etc." But be careful, warns Asioli: the urge to erase everything is always lurking.

Read also - Anne Snyder: "We are in a big delivery room”

Assimilating the "great lesson of humility", to which Asioli invites us, enters into “sympathetic resonance” with the "recognition of the wound", indicated by Stanghellini as a path to reawaken the consciousness of the self and of the other. Navigating between Homer, Sophocles and Caravaggio, Stanghellini makes us reflect on four great wounds. The hidden corporal one, which allows to be recognized by his wet-nurse. That of the soul of Orestes and Electra who discover themselves to be blood relatives: "here, the wound of one resonates within the wound of the other. Through empathy, the other enters into the definition of me." In the mythological story of Philoctetes and Neoptolemus, recognition occurs not between two blood relatives, but between two strangers, by the overcoming of repulsion (of Philoctetes’ disgusting wound and the falsehood of the deception warped by Odysseus) leading to compassion and cure.
Then there is the wound on Jesus' side, at the centre of Caravaggio’s The Incredulity of St. Thomas. Here, the visible body, its image, is not enough for the apostle. He wants a tangible body, a flesh. The finger in the wound, which Jesus himself accompanies, is like wanting to penetrate carnally into the profound truth of things. "My Lord and my God": recognition blossoms within the dramatic and fascinating dialectic between the carnal and tangible human, and, at the same time, the mysteriously divine. Thus, the sacredness of the other and their recognition is surrendered to "the fragrance of the event."
La verità nasce dalla carne [The truth is born of the flesh] is the title of a volume of writings by Fr. Giussani. Stanghellini wanted to dedicate his intervention to him and to this book.