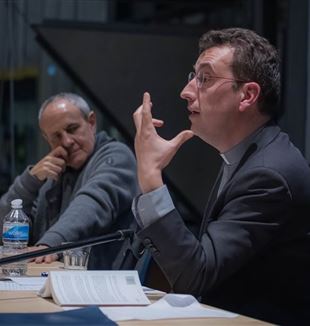 There was great expectancy within the community of CL in the Netherlands for Fr. Julián Carrón’s first visit to the country, on the 13 and 14 December. The first gesture was a visit to the Misha de Vries primary school, founded two years ago in Vught by a group of friends of the movement. During lunch, Carrón spoke with members of the school council, teaching staff and other employees. The theme of the discussion was how the Misha de Vries can transmit the Catholic tradition, especially to children far from this tradition. Carrón recalled that our age is similar to that of the early Christians, where different traditions and cultures coexist. Dialogue, today like before, seems impossible. We must look at the method that Christ himself used: he did not bring definitions or concepts, but an experience. The same goes for school: the children do not learn through words, but through what the teachers embody and live. The children see what the teachers want to pass on to them. The challenge for the teacher is, says Carrón, to live in such a way that the children see something different. From this, they begin to wonder where that diversity comes from. 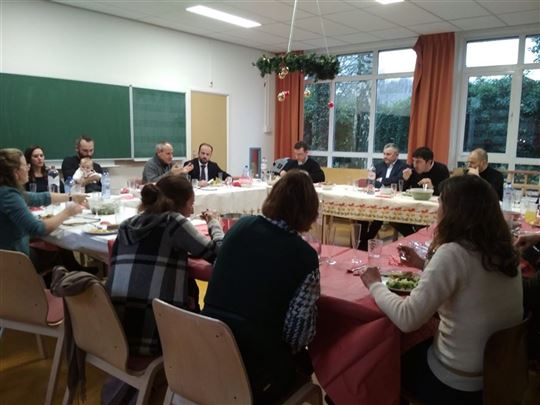 Yet, those who educate know that they can make mistakes and the temptation is to think that it is not even worthwhile to begin with. Carrón replied that what we do are only "ironic attempts", attempts that we can make because we know that it is God Himself who has chosen this method: to reach others precisely through us. God has always used sinners, including the apostles themselves, to build His Church. Children at school will be able to see that something greater is at work within our limited attempts.

In the evening, around 200 people (from the Netherlands, but there were also friends from Brussels, Cologne and Luxembourg) gathered at the futuristic LocHal in Tilburg for the presentation of the Dutch translation of Fr. Giussani’s Generating Traces in the History of the World. After the songs, Fr. Michiel Peeters, translator of the book and chaplain of the University of Tilburg, recounted what arouses in him the proposal of Communion and Liberation: "In the last seven years, my work with the students has been a special opportunity to verify the novelty and relevance of Fr. Giussani’s proposal. Not only for those who come from a Christian tradition (that has almost disappeared here), but for the man of today. As an opportunity to live truly, to savour and share life, not just to survive". 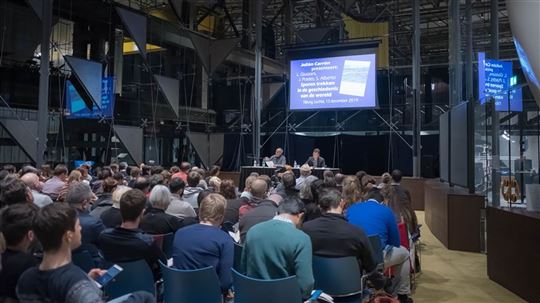 Carrón opened his talk with a quote from Umberto Galimberti: "When I began as a psychoanalyst, the problems were emotional, sentimental and sexual. Now they concern the void of meaning. What can free us from this nothingness and help us overcome nihilism?". The priest asked himself this. And he continued: "Only a concrete presence can respond, a presence that is able to grasp the whole person, exert an attraction in them that goes to the root of their existence, because it corresponds to the needs of our humanity like nothing else, however confused our conscience may be. Without such an experience that embraces our "I" there is no Christianity". Because, he explained: "If the Christian faith were not a present experience, if it were not confirmed by experience, if in my experience I could not find confirmation of the human advantage of being a Christian, then my faith would not be able to uphold in a world in which everything says the opposite".
But when the encounter takes place and is welcomed, Carrón continued, a "new creature" is born: a new heart, a different way of eating and drinking, of doing ordinary things. "We are not asked to give something up to experience Christianity, but to change our relationship with everything. This must happen, I must be able to verify this change in my life, otherwise I will never be convinced".

At the end there was time for a few questions. A young Dutch woman intervened and said that she was struck by a sentence from Fr. Giussani's book that says: "Just as our every move starts off not from an analysis of what the eyes see, but from an embrace of what the heart is waiting for, in the same way perfection is not the keeping of rules, but adhesion to a Presence.” Carrón commented: "We tend to analyze. But what you have to pay attention to is what is liberating in your experience. Jesus understood better who the sinner kissing his feet was, than all the analyses of the other people present. She understood who Jesus was better than all the others who were there, no matter how "wise" they were". 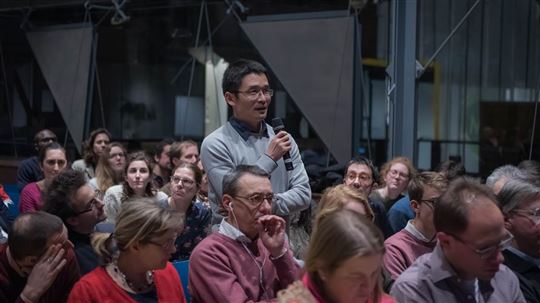 The next morning, about twenty students and young workers met in the Maranatha university chaplaincy in Tilburg for mass and breakfast. An Indonesian friend spoke of how she felt privileged: it was necessary for her to come from Indonesia to the Netherlands to live an encounter that would radically change her life and her husband’s. Yet, nothing has changed on the outside. A conversation developed about the infinite nature of desire, the meaning of work, the relationship with politics and the recognition of one's vocation.

After a brief visit to St. John's Cathedral in 's-Hertogenbosch, Carrón was invited to lunch at the house of Wim and Annette Peeters. They were the first Dutch people to learn about the movement in the 1980s. In the afternoon, there was an assembly with the community of the Netherlands. There were many questions. All focused on the struggle within personal circumstances, in a context of ecclesiastical discouragement and human limitation. And yet, more than a lament, a note of surprise resonated in every speech. Surprise that this experience, here too, is possible. For example, in a poor and ageing parish, where one of the participants was able to meet a friendly face that led him to meet new friends. This fact had such an impact on him that not only did he discover himself to be grateful to God, but he was able to say that he saw Him reveal Himself. And even the little things in life, like folding your pyjamas, are experienced differently, with more attention. But, is our distraction in daily life a necessary part of the journey to be made? Our distraction is a fact, Carrón replied. We should not be surprised by this, but by the fact that there is Someone who is interested in our nothingness. And this happens through specific people who testify that the Mystery has become incarnate.
Another person intervened, recounting that often we feel defeated because of our mistakes, even when others have already forgiven us. Carrón replied that it is only because of our vulnerability that we can be seized: "Your humanity, with all its errors, is the only thing that can be seized". Not because we are good, but because we are so loved, with such tenderness that our hearts are touched deeply. This challenges us, precisely because our inconsistency is so "consistent".

The last intervention talked about nostalgia for a companionship of friends. And Carrón replied: "I heard a child say to its mother: you miss me even when I'm there.” Companionship is only the sign of Another, he says, to which Jesus himself always makes reference: "If you believe in Me, you believe in the Father who sent Me". We cannot miss Him without Him being present: "He did not come to eradicate our nostalgia for Him, but to make it "explode", to take us to the Father. We can, therefore, be grateful that we miss Him. It is an opportunity to be aware of Him.” 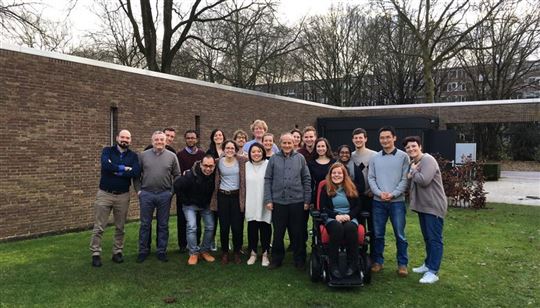 Someone said: "It was exceptional to be able to meet Carrón in our city, in our parish hall. We had often asked and hoped for him to come and now he was really there. We were not only at the top of the tree like Zacchaeus, but he came to our house. His visit helps us to live Advent as a waiting”.
The morning following these two days with Carrón was not an empty "morning after", but it was full of the desire to continue, to understand better, to verify and share what we had met with the people around us.#GeneratingTraces