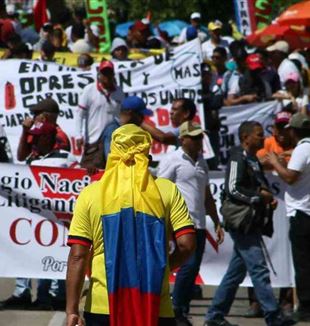 The strike on 21 November catalysed much distress in Colombian society, to the point that we are entering a third week of demonstrations. Initially, the trade unions had called the strike in order to protest against a possible reform of pensions, tax reform and a possible reform of employment contracts. However, other sectors of society have decided to join in for many other reasons: the government’s distance from the implementation of peace agreements; the murder of social leaders; the recent murder of eight minors (recruited by force from illegal groups), in combat, by the army; the precariousness of the health system and corruption. In addition, a young boy, Dilan Cruz, died during the protests, at the hand of the Special Riot Forces. What is evident is that people take to the streets because they feel that they are not being heard. And there is a fundamental concern that arises from the need for life to make sense, and to be given for a great and just ideal. In this way, social distress gives way to existential distress.

A friend from university expresses well the general dissatisfaction: "After days of intense dialogue with friends on the current situation in our country, ... I have experienced days of great pain because I don’t feel that anything they say corresponds to me, no position, no judgment has been exceptional (i.e. that it corresponds adequately to the expectations of the heart) leaving a wound". However, faced with the difficulties caused by the interruption of the semester of study with classmates, he added: "Many young people worry about passing their exams with the best possible grade (or even just passing them) whilst others are interested in going to the depth of the issues put forward. Reality speaks, and although the desire for justice that is manifest in these days is a collective cry (which I also share in a certain way), reality also calls us to respond to it, to involve ourselves even more. How can we build without silencing our cry?"

Reading this text, another friend (a lawyer living in another city) reacted as follows: "I was deeply touched. I saw the woman that I loved die because of bad health and corruption and, despite the legitimacy of the demonstration I took part in, I felt the same pain... Can I share the text amongst my friends? Thanks again.”

This pain makes it clear that the strike, although it can generate possibilities of dialogue, is not able to respond adequately to the general dissatisfaction. On the contrary, as the days pass, the damage caused by the demonstrations, to a large part of society, becomes more and more serious and, paradoxically, those that suffer the damage (for example through the lack of public transport) are those who are weakest.

But let's return to the question: How can we build without silencing our cry?

First of all, if we do not listen adequately to the cry of those who come to seek us, we run the risk of being part of the problem and not of the solution. In the life of a Christian community, and of the Church in general, listening and welcoming coincide with helping us look together at a human reality in which we can see a path.

We realize that, without a real companionship in our life, without belonging, we enter into reality and take the form of the first thing we find: our instinctive reaction or some external proposal. So we are subject to power that, in turn, manipulates us. Within a companionship, on the other hand, our creativity is exalted, as testified by a friend of ours from Bogotá, who simply helps people who are unemployed by providing them assistance in drawing up their cv, seeking job opportunities and circulating them in a targeted manner according to their professional profiles.

The testimonies of these friends remind us of the words that Pope Francis spoke to the Colombian bishops during his visit in 2017: "Colombia needs that watchfulness…to sustain its courage in taking the first step towards definitive peace and reconciliation…I aks you to keep your gaze ever fixed on concrete men and women. Do not talk about “man”, but about human persons, loved by God and composed of flesh and bones, history, faith, feelings, disappointments, frustrations, sorrows and hurts”.

For us to be able to freely judge what is happening and discern how to act for the construction of a more human society, we need to walk with friends like these, with whom we can share our desire to turn them into a creativity capable of illuminating our society and its wounds.