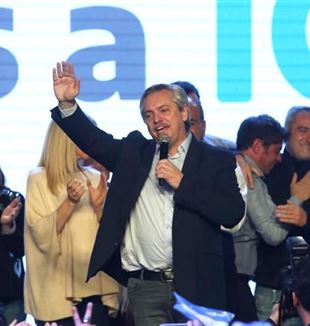 We bring forth our "experience" of being Argentinians who live our history, passionate about the beauty and richness embodied by our identity. We are a people, whose identity is the recognition and the encounter with what is different. Our entire history, from the beginning, has consisted in the challenge of recognizing the other, from the closest to the farthest, as part of our own identity. Thus, a viable, social friendship, recognized by the whole world, was formed. Until 1870, we only had a population of 1,800,000, then, from 1870 to 1940, we managed to welcome 4,500,000 immigrants from all over the world. A country was formed from this “polyhedron” of races, cultures, languages, customs, traditions, beliefs. A great country has thus been forged, whose historical development was also due to the contributions of various political parties (liberal, conservative, radical, socialist, justice, pro-development). From their perspective, which by definition is always partial, they have contributed to the integration of European, Asian and Latin American immigrants and have increased the active participation of those living in the peripheries of cities and in marginalized areas of Argentina, in the country’s economic, social and political life.

Within this historical and political process there was also the risk of a violent clash between incompatible positions, which can destroy the basic experience of being a nation: the proposal of different traditions (Enlightenment-populist, two Argentinas), of different creeds (liberal-revisionist), of disagreements (agricultural or industrial), of confrontation (unitary - federal; regime - cause; Peronists - anti-Peronists, bourgeoisie - revolutionaries). This makes the belonging to this nation, which we want to be more united in its diversity, to be free and protagonist in the construction of the common good, all the more dramatic.

In recent years, such conflict, along with the desire for the other to disappear in order to build an Argentina that is tailored to what some want and that excludes others, has gotten worse. In addition to this, is a worsening economic situation – inflation and rising unemployment – which affects most of our fellow citizens. Thus confusion, misunderstanding and mistrust reign, creating walls where bridges are needed.

Why is this not a damnation for the nation but a great human opportunity? Where can we start building again? What is the seed that allows the rebirth of a society, open to dialogue and social friendship?

If our national identity is formed by the amalgamation of the diversity that one encounters, without nullifying it but reconciling themselves in this newness, which Pope Francis calls the "culture of encounter", then the issue is not to ask for a recipe but the question is if we take ourselves seriously. This means that everything begins with the person and that it is in vain – as Eliot, the great poet, warns – “They constantly try to escape. From the darkness outside and within, by dreaming of systems so perfect that ono one will need to be good. But the man that is will shadow”. It is futile to dream that the triumph of one political force or another can redeem the social situation, thus mitigating the function of the elections.

Everyone, if they are careful, will find, along their path, something humanly great and alive with which to compare their deepest desire. With discretion, but with the certainty that comes from a lived experience, we believe that the contribution we can make is to live a human experience that allows us to recognize something in reality that lives up to our desire.

Within our historical process there has been an unexpected "Event", which we could not imagine and which is a Sign for the whole world: the call of Fr. Jorge Bergoglio to the Throne of Peter: Pope Francis. We must not let ourselves be confused by the reports of the press, but we are interested in his gestures and his words that come from direct sources.

In a text from October 2010, "We as citizens, we as a people", the then Cardinal Bergoglio proposed to overcome the culture of confrontation - today we call it split - through the culture of encounter, where the "other" is always good for me. Cardinal Mario Poli, Archbishop of Buenos Aires, in the last Te Deum, picked up the four great principles from that text that are a method for living that "conversion" that we Argentines need: time, the opening of processes, is superior to space, to occupying places; unity, in the care of social friendship, is superior to the conflict of clashing interests that should direct themselves together towards the common good; reality is more important than the idea, that seeks to understand it with a limited horizon; the whole, the consideration of all the factors of experience, is superior to the component, to that aspect that most strikes us. In a recent meeting with young Latin Americans, Pope Francis distinguished between two types of dynamic: the "political-intermediary", who exploits conflicts, contradicts the opposing poles and causes social enmity to dominate; and the "political-mediator", who facilitates mutual recognition between the conflicting poles, since both are necessary and complementary in that they open their eyes towards the horizon of the common good.

Taking this seriously allows us to live a realistic and complete human experience, that lives up to our desire. It is not by eliminating the other that this infinite desire is satisfied. The renewal and amplification of this self-awareness is authentic hope for our people. Aware of this, we will be able to recognize in the other - who may think differently at the political level, but who structurally has the same desire that I have - a fellow traveller and, therefore, someone who is a good for me, challenges me and asks questions, perceives aspects that have been overlooked, provides cues and recognizes limits.

Therefore, 27th of October is a new opportunity to take a step of cultural maturity through our political diversity, to set out towards an Argentina that is equal to our identity and that generates social friendship and daily commitment to reality.