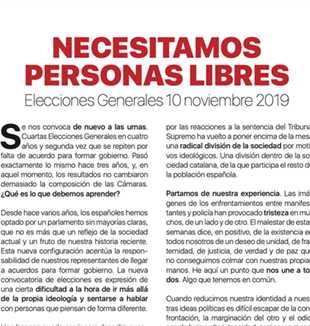 We've been summoned to the polls again. The fourth general election in four years, repeated, a second time, because of a lack of agreement in forming the government. Exactly the same thing happened three years ago and, that time, the results did not really change the composition of the Chambers. What do we have to learn from this?

For several years now, we Spaniards have been opting for a Parliament without a clear majority, and that is nothing more than a reflection of our current society and fruit of our recent history. This new configuration emphasizes the responsibility of our representatives to reach agreements to form a government. This call for new elections is an expression of a difficulty when it comes to going beyond one’s own ideology and sitting down and talking to people who think differently.

Our country’s situation can be described by this image: several card players around a table. The cards are dealt, and after a few minutes, looking at them and looking at each other in the face, they decide to stop the game: they want new cards. Can the parent of a sick child do this? Can he ask for a new one? Or when there is a tense situation at work, can you ask for a new boss? Or a mother who is exasperated by her teenage son, can she ask to skip that phase of his life?

This inability to face reality, to face one's neighbour and to face the adventure of entering into the mystery of the other, does not just concern politicians, it concerns us all. The tension we have experienced in Catalonia, due to the reactions to the Supreme Court ruling, has once created radical divisions in society for ideological reasons. Divisions within Catalan society, which also involve the rest of the Spanish population.

Let us start from our own experience. The images of the clashes between demonstrators and police have caused much sadness, on both sides. The uneasiness of these weeks speaks positively of the existence, in all of us, of a desire for unity, fraternity, justice, truth and peace, which we cannot achieve with our own hands. This is the point that unites us all. Something we have in common.

When we reduce our identity to our political ideas, it is difficult to escape confrontation, the marginalization of the other and hatred, to a lesser or greater extent, as if we belonged to different species. But is the other merely what he thinks and believes? Does he not suffer, rejoice and be surprised, like us? Our most basic desires and needs (the desire to be loved, to be happy, the need for meaning, truth, good) are what delineate our human face and form the basis of a possible coexistence: they are our first political resource!

Both the impossibility of reaching government agreements and the division in Catalonia are a reminder: we have to build upon a foundation that is more solid than law. Even the fundamental law, our Constitution, had been the product of and depends on an agreement of cohabitation. This is what happens in a family, which gives itself rules to promote communal life, but without the basic agreement, made up of historical ties, of reason and affection, these rules become suffocating and relationships decay.

After years of democratic experience, seeing how our coexistence has worn out, we urgently need to focus on an education that places, at its center, that which unites us and characterizes our humanity: our needs, our search for meaning. The existential emptiness of the young people today, who set fire to the streets of Barcelona, as well as many other places, is a breeding ground for the fascination with violence and other forms of self-destruction, and is a warning sign.

But is there anything or anyone who can live up to our restless humanity? We need people who are free in whom we can see our desires come true, people who live a full, attractive, fascinating life. Free people who do not fear the encounter with what is different, on the contrary, they launch themselves into the adventure of discovering something new that enriches them. People who are not shocked by our wounded humanity, but who look at it with affection, who welcome it!

Like that man who, two thousand years ago, approached the well in Sicar to ask a woman for water: ““You are a Jew and I am a Samaritan woman. How can you ask me for a drink?” For Jews do not associate with Samaritans.” (John 4:9). Diversity at the forefront (nothing new under the sun!). But Jesus does not stop at the surface and goes to the bottom of the thirst of that woman: she had had five husbands and now was married to her sixth. Whilst everyone looked at her with scandal or prevention, Jesus looked at her with tenderness: He had come to quench that first.

In these days, a Catalan university student, faced with the images of violence in Barcelona, asked himself: "What are these young people looking for? What drives them to set fire to bins? They're looking to be protagonists, something for which to get up in the morning. Like me...". And he surprised by the change in his gaze: only a year ago be would have reacted by insulting them, full of anger. What happened to make this change possible? It was the encounter with people who looked at his restless humanity with tenderness. We need to understand “what is happening to each of us” in order to re-establish our coexistence.

This is how to lay the foundations to reach agreement, even in politics. General calls for dialogue, which have so far remained sterile, are not enough to overcome the barriers that separate us. "The best way to dialogue is not that of speaking and debating", says Pope Francis, "but that of doing something together of making plans…do not be afraid to engage in the exodus necessary for every authentic dialogue” (Address to the representatives of the V National Conference of the Italian Church, Florence, Cathedral of Santa Maria del Fiore, 10 November 2015). Recently, a teacher spoke about the radical ideological differences that existed between colleagues in their school and the circumvention and resentment that followed. The need to take care of one problematic pupil led two teachers to work together, collaborating, hand in hand, until they were surprised by the presence of the other.

In our country, we need to "do something together", at all levels of society. We need to get out of our "comfort zones" and undertake the exodus that the Pope suggests, to deal with issues that we have postponed for decades, precisely because they required agreements that went far beyond even simple majorities. If we place the humanity that unites us at the center of our coexistence, rather than the ideas that separate us, then all this will become possible. We are called to be protagonists of this historical moment.