A series of social protests have broken out in Ecuador, since Thursday 3 October, against the economic measures adopted by the government, including the elimination of fuel subsidies. Roused by transporters, and sustained by the indigenous people, alongside women, children and young people, and other social players, what was supposed to be a peaceful protest, in the space of a few hours, transformed into a wave of violence throughout the country, also fomented by unidentified groups. That same day, the government declared a state of emergency, and a few days later, imposed a curfew in the most problematic areas of the country. In just a few days, there was damage to millions through vandalism of public and private property, educational and productive activities were suspended at a national level, several people died, several hundred people were injured and hundreds of prisoners were detained.

In the midst of this chaos, it is clear that what is at stake is not simply dissatisfaction with economic measures, but is the result of multiple social fractures that have accumulated over time, mingled with the political interests of various players. Fractures and concerns that, in the pictures that have permeated social media in these days, have portrayed an image of violence, fear, confusion and helplessness. 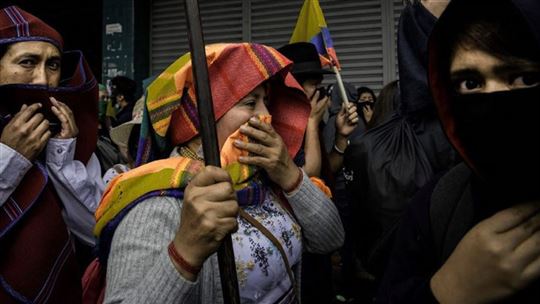 In all this confusion, how can we being to make our own contribution to Ecuador and to the world?

1. From a clear and realistic awareness of the situation, which goes beyond the analysis of all the concerns and factors involved. In these days, the need for truth has clashed, many times, with the impossibility of getting to the bottom of the problem. What is really going on? What is behind the whole situation? "We are alone in our needs, in our need to be and to live intensely, like one alone in the desert. All he or she can do is wait until someone appears. And human persons will certainly not provide the solution because it is precisely their needs that must be resolved” (L. Giussani). Only the awareness of the deep need to live and build that unites us, and of our inability to respond to it, as we have seen in these days, will make us look at our humanity, and that of others, with affection.

2. From the certainty that the other is a good and that dialogue (and not violence) is the only possible method for the growth of my person and for the construction of the country. The other is a good because they exist, and being different from me, they allow me to go deeper into who I am and what I think, and they complete me. This is what we have to return to every day, in our family, at work, at university, at school, generating spaces for real encounters, without distinguishing between nationalities, races or social classes. This is what we learn from Pope Francis who, in these days, has place the peoples of the Amazon at the center of the attention of the Church and of the world.

3. From the need for a real education, which lives up to our deepest needs. We need men and women who demonstrate and exemplify the desire to build, work, dialogue and form families. Men and women who are able to offer a positive and hopeful meaning to the thousands and thousands of young people who, in these days, have filled the streets in search of a way to make themselves heard. The example of so many humble and simple people who walked kilometres on foot so that they wouldn’t miss work, has been impressive.

Never before have we been so certain that only the encounter with Christ, who has reached us in the form of the Christian community, fills our lives with hope. Today, as happened two thousand years ago in the chaos of the Roman Empire. And by participating in the place where He is still present, we experience a human fullness and an inexhaustible force that pushes us to always start over again. This is what we desire to live and is what we want to offer to all our brothers and sisters.