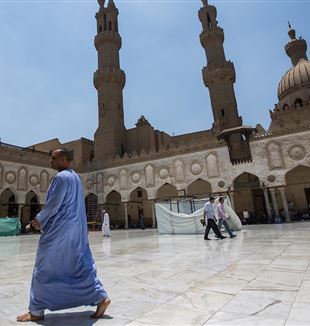 The Rimini Meeting returns to Egypt, to Cairo. The occasion was a new meeting, following that of last October 2018, with the Grand Imam of Al Azhar, Ahmad al Tayyeb, who received our delegation, formed by president Emilia Guarnieri, Marco Aluigi, Wael Farouq, Andrea Simoncini, Roberto Fontolan and Luca Fiore. This invitation, from the most important religious authority in the Sunni world, follows the talk, given at the last edition of the Meeting, of Nazir Ayyad, general secretary of the Al-Azhar Islamic Research Academy.

Emilia Guarnieri was thankful for the opportunity to continue this dialogue, specifically in light of the meeting, in Abu Dhabi, between the Grand Imam and Pope Francis, and the signing of the document on Human Brotherhood, for world peace and common coexistence. In fact, the common declaration says: "Al Azhar and the Catholic Church declare that they adopt the culture of dialogue as a way forward, common collaboration as a way forward, mutual knowledge as a method and criterion". These three dimensions, our president observed, are those which the Meeting has been emphasising, for forty years. The visit gave the opportunity to talk about the exhibition "Francis and the Sultan 1219-2019. The meeting on the other bank", which concluded with a photo of the meeting between Francis and Tayyeb.

In the dialogue with the imam, a consensus emerged on the fact that without recognition of the Mystery, relations between individuals and peoples are dominated by violence.

The Great Imam said he was happy to meet our delegation and was pleased that a reality such as the Meeting wishes to spread the spirit that animates the Abu Dhabi document.

The President of the Meeting then said that she felt particularly close to the imam, because of his profoundly religious attitude. Al Tayyeb responded with a picture: we sing the same song with different voices.

At the end of the meeting, the delegation donated a nineteenth-century print, depicting the Tiberius Bridge in Rimini, to Al Tayyeb. "A bridge that is two thousand years old and that has resisted all attempts at destruction, including those of the Second World War", said Marco Aluigi. "We thought of this image because, in you, we see a bridge builder and we feel close to you in your vocation".